Author Tim O'Brien knows the horrors of Vietnam firsthand and uses his experience in 'The Things They Carried.' Let's take a look at how O'Brien uses Vietnam and small-town America to highlight the effects of this terrible war.
Create an account

During the Vietnam war, American Tim O'Brien fought in the jungles of Vietnam against the Viet Cong forces, a guerrilla fighting unit from South Vietnam that was on the side of the North Vietnamese. The Viet Cong were much more familiar with the jungles than the American troops were, so they were able to sneak around and arrange ambushes and traps much more effectively than the Americans.

Since he had real-life experience with that area of the war, O'Brien set a fair amount of the stories in The Things They Carried in that jungle. There are booby-traps everywhere, and the jungle itself seems to be hostile to the presence of the Americans.

This leads to an intense feeling of paranoia among the troops that O'Brien describes in the stories set in these jungles. The troops are constantly aware that death is near - they're constantly witnessing their friends getting killed and constantly fighting or killing enemies.

The tension, for those troops that live through it, often proves too much. Some soldiers run away, others go crazy, one man even shoots himself in the foot to escape. The creepy nature of the jungle, and by extension the war itself, is a stark contrast to life for these troops once they all go home to their own small towns. 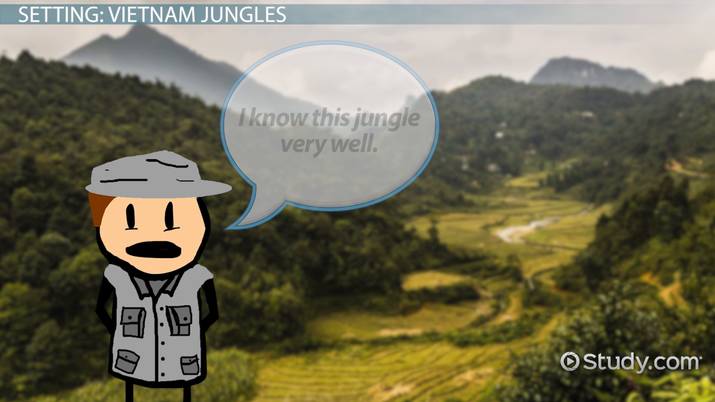 Coming up next: Historical Context for The Things They Carried

Setting: Back Home in America

O'Brien uses the stories set in America, both before and after the war, to contrast with the instability in Vietnam. Before they leave, the guys in O'Brien's unit are all used to the American way of doing things, American reliability and stability. They come back from the war totally changed, though.

All of this adds up to a tragic situation for the troops that come back home. They're full of memories of the friends they lost, but nobody that stayed home in America can ever really understand. All of those memories, fears, and anger have to stay trapped inside.

O'Brien uses that murky relationship with facts to make other commentaries as well. Much of The Things They Carried falls into the genre of metafiction, or fiction that comments on itself or on the nature of fiction in general. This is a similar idea to 'breaking the fourth wall' in movies, TV, or theater. When we finally find out that most of what we've read so far isn't actually true, O'Brien can make an important statement: we often learn true things from things that aren't factual.

O'Brien is able to pull off this switcheroo through a writing technique called verisimilitude - basically, the appearance of something being real. Since he was there, O'Brien knows what went down in those jungles, and he knows what it was like to come back. The super-real feel of his writing makes the reveal that most of it is made up much more shocking, making his metafictional points much more convincing.

The Things They Carried, Tim O'Brien's genre-bending Vietnam War book, balances two settings: the Vietnam jungles of the war and the hometowns of the troops that fight in those jungles. In the jungle, O'Brien uses the setting to enhance and explain the troops' paranoia and fear. Back home, O'Brien can explore how being away at war forever changes a person. It exists between the lines of fiction and nonfiction, with a realism-heavy writing style that often comments on the nature of fiction itself.

Writing Style in The Things They Carried

Imagery in The Things They Carried

Curt Lemon in The Things They Carried

Ted Lavender in The Things They Carried

Role of Women in The Things They Carried

Mary Anne Bell in The Things They Carried

Kiowa in The Things They Carried

Kiowa Quotes in The Things They Carried

The Things They Carried Chapter 1 Summary

Courage Quotes in The Things They Carried

Azar in The Things They Carried

Rat Kiley in The Things They Carried

On the Rainy River by Tim O'Brien: Summary, Theme & Analysis

Mental Institutions in the 1950s

Setting of The Yellow Wallpaper