Three strangers are not who they seem to be in this short story by Thomas Hardy. In this lesson, we'll dive deeper into ''The Three Strangers'' and analyze some of the aspects of the action.
Create an account

Would you let a trio of mysterious strangers into a party at your private residence? The character in ''The Three Strangers'' by Thomas Hardy did! Read on to learn more about their secret identities and the chaos that ensues following their visit.

The first part of the story tells us about the isolated house where the events of the tale are going to unfold: ''Higher Crowstairs, as the house was called, stood quite detached and undefended.'' Yet, it's only a short distance from a town named Casterbridge, which houses the county jail.

The evening in question is a blustery day in late winter, and the occasion of the party at the Fennel residence is a celebration of the birth and christening of a new daughter. Twenty or so friends have packed into the cottage, giving the entire place a cozy feel: ''A glance into the apartment at eight o'clock on this eventful evening would have resulted in the opinion that it was as cosy and comfortable a nook as could be wished for in boisterous weather.'' There is dancing, singing, and chatter as the party-goers mingle and enjoy each other's company. 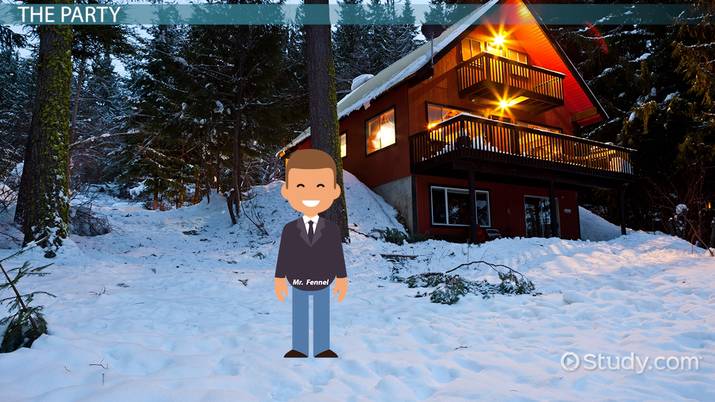 Coming up next: The Three Strangers: Characters & Setting

The first stranger arrives looking for a place to dry off and warm up from the rainy conditions. Mr. and Mrs. Fennel allow the man to come in and warm himself by the fire. He tells them he's come from the nearby town and lost both his pipe and his tobacco pouch, which the homeowners quickly remedy.

Just as the first stranger is getting settled, there comes another knocking at the door, who's headed toward town. The first man is headed away from town, though both men are looking to rest inside out of the inclement weather. He sits next to the first stranger and partakes of the party's mead, a type of liquor made with honey. In fact, he partakes maybe a little too much, drinking more than his share.

The party-goers try to engage the second stranger in conversation and ask about his occupation. In turn, he sings them a song about his career: ''My tools are but common ones, Simple shepherds all - My tools are no sight to see: A little hempen string, and a post whereon to swing, Are implements enough for me!'' The second stranger is, in fact, a hangman headed toward the jail.

The arrival of the third, and final, stranger sets everyone - and everything - into motion. When he appears at the door, he looks around the room of party-goers, acts frightened and flees: ''They noticed to their surprise that he stood before them the picture of abject terror--his knees trembling, his hand shaking so violently that the door-latch by which he supported himself rattled audibly: his white lips were parted, and his eyes fixed on the merry officer of justice in the middle of the room.''

After the man flees, the sound of a gun firing can be heard from the nearby town. It's a signal from the jail that a prisoner has escaped. One of the party guests identifies himself as a constable and organizes a search party for the third stranger who must be, they presume, the escaped convict. While everyone's out searching, the first two strangers sneak back into the house, helping themselves to more food and drink. The two men then part ways.

By the time the party guests track down the third stranger and haul him back to the cottage, local authorities have arrived. The third stranger, it turns out, is not the escaped prisoner who was set to be executed, but the prisoner's brother. The real escapee, convicted for stealing sheep, was the first stranger, who had spent time in the company of the very executioner (the second stranger) set to take his life the next day.

What begins as a somewhat ominous and mysterious parade of strangers arriving at an isolated cottage on a rainy, winter evening has turned into something quite different by the time the story is over. The action of the story nearly follows the formula for many of William Shakespeare's comedies: it includes instances of disguise and mistaken identity, conflict between two groups (such as regular partygoers and the prison system), turmoil or action as a result of that crisis, and general misdirection and hilarious mayhem. After all, what could be more comical than a hangman and his target enjoying one another's company without realizing who the other one is?

It's possible that Hardy was using the story to offer some opinion on the legal or prison system of the day, which considered stealing sheep to be worthy of a death sentence. By poking fun at the system, Hardy is able to get readers thinking more deeply about whether the consequences really match the crime.

One other thing that Hardy does really well in this story is to build an element of mystery around the three strangers. We're introduced into a story that could be anyone's party at any home and at any time. The idea of it being winter and a rainy night sets the stage for suspense, followed by the anonymity of each of the strangers who arrives. By the time the reader figures out what's happening, the tone of the story has lightened, and you can nearly envision the party goers, clad in their fancy attire, parading through dark and rainy terrain to capture a suspect while the real criminal is warm and toasty inside the house.

Let's recap. Thomas Hardy's ''The Three Strangers'' is a comical tale of disguise, mistaken identity, and misdirection. Each of the three strangers who appears at the party has his own unique back story, which converges into one story when the constable takes charge and goes on the hunt for a convict. Unbeknownst to all, the escaped prisoner and his executioner enjoy the home's food and mead together and then part ways, none the wiser.

A Cup Of Tea by Katherine Mansfield: Summary & Theme

The Nightingale & the Rose Summary

In a Station of the Metro by Ezra Pound: Poem Analysis & Overview

The Mill on the Floss by George Eliot: Summary, Analysis and Themes