The Treaty of Nanjing was an agreement that lead to a series of other 'unequal treaties.' Summarize the events of the Opium trade and war, the signing of the Treaty of Nanjing, and the effects it eventually had on both the West and China. Updated: 12/20/2021
Create an account

History of China and the West

For centuries, China was an isolated country. It closed its doors to the world and developed internally. This all began to change during the 1600s, when Western merchants gradually opened up trade with China. Over time, European countries like Great Britain made important in-roads with the Chinese government, and the British realized that China was an important trading partner because:

Over time, this partnership began to tip in favor of Great Britain, at the expense of China. And it eventually led to the Treaty of Nanjing, which marks the beginning of a series of unfair agreements that benefited the West and hurt China. 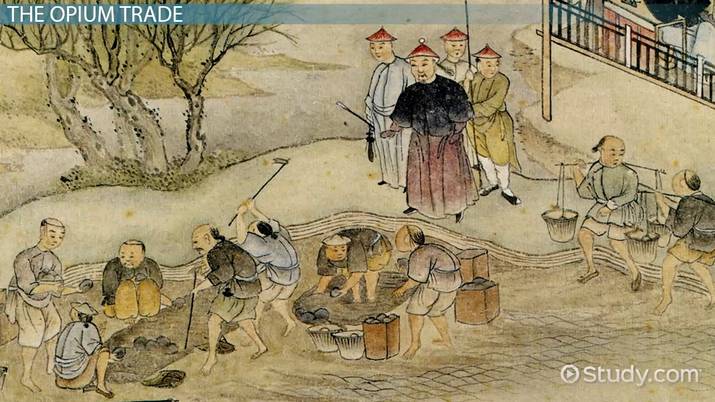 Coming up next: History of the Nanjing Massacre

Beginning in the 1700s, Great Britain made an enormous amount of money by exporting opium to China. The opium, a highly addictive drug, was made from poppy plants grown in India, one of Britain's many colonies. Chinese buyers quickly became addicted to the drug, causing the demand for opium to grow.

Despite the ban, the British continued to illegally trade the drug in China. In March 1839, the Chinese government took action by destroying roughly 1,400 tons of opium; that's about 2.8 million pounds. Within a few days, tensions between British merchants and the Chinese were on the rise. To make matters worse, a group of British sailors killed a Chinese man. The British government, however, would not hand over its accused citizens. This made the Chinese government even angrier.

The initial conflict between Great Britain and China in 1839 led into the three-year-long First Opium War. Shortly after the Chinese government destroyed the opium, a British ship destroyed a Chinese blockade meant to prevent British trade up the Pearl River.

In 1840, a British military detachment made its way from Hong Kong up the Pearl River to the port of Canton. After the two countries failed to reach an agreement, the British captured Canton in May of 1841. One year later, they captured the city of Nanjing as well. At this point, the Chinese realized that they didn't stand a chance against Great Britain's military might and were forced to surrender.

The Treaty of Nanjing

The Treaty of Nanjing officially brought the First Opium War to an end on August 29, 1842. As part of the agreement, the Chinese agreed to:

One year later, Great Britain and China signed the British Supplementary Treaty of the Bogue that expanded on to the Treaty of Nanjing. At this point, the British secured the right to extraterritoriality. Extraterritoriality means that the British citizens who committed a crime in China would be tried in British courts. The supplementary agreement also included a most-favored nation clause meaning that, whatever trade terms China allowed other counties, Great Britain would be allowed to trade under those terms as well, if it pleased.

Effects of the Treaty of Nanjing

The Treaty of Nanjing was the first of a series of 'unequal treaties' that China was forced to sign with Western countries. These treaties took advantage of the Chinese government and people, and it created wildly unfair trade agreements. Signing the Treaty of Nanjing opened China to unequal treatment from other countries, like the U.S. and France. In addition, the unfair agreements the Chinese were forced to accept helped lay the groundwork for the Second Opium War fought during the 1850s.

Through the 1700s and 1800s, Great Britain made a fortune by exporting opium to China. The use of opium, a highly addictive drug made from poppy plants grown in India, had a very negative impact on the people of China. In 1799, the Chinese government banned the opium trade, but that did not stop the British from continuing to sell opium to the Chinese.

The war came to an end on August 29, 1842, when the Chinese were forced to accept British terms. The Treaty of Nanjing, the beginning of a series of unfair agreements that benefited the West and hurt China, required China to repay British merchants for damages, open five ports for British residence and trade, and place a low tariff on British goods.

One year later, the two countries signed the British Supplementary Treaty of the Bogue, which expanded the Treaty of Nanjing and gave Great Britain the right to extraterritoriality and the most-favored nation clause. Extraterritoriality meant British citizens who committed a crime in China would be tried in British courts, and the most-favored nation clause stated that whatever trade terms China allowed other countries, Great Britain would be allowed to trade under those terms as well, if it pleased.

The Treaty of Nanjing was the first of a long line of 'unequal treaties,' treaties that took advantage of the Chinese government and people. It created wildly unfair trade agreements and set the precedent for Western powers to take advantage of China.

Communism in China Factors & Rise | How Did China Become Communist?

Meiji Restoration Effects & Causes | What was the Main Goal of Japanese Modernization?

Women in the Qing Dynasty

Ballista Function, History & Facts | What is a Ballista?

Voltaire Beliefs, Philosophy & Works | What Was Voltaire Known For?