Financially speaking, the last decade of the 20th century was a good one for the United States. In this lesson, we'll discuss how employment, financial markets, GDP, and the government's surplus all improved throughout the '90s.
Create an account

The beginning of the decade didn't start out encouraging investors or economists. The Savings and Loan Scandal of 1989, which was a situation much like the financial crisis of 2007 when banks became too aggressive in their real estate lending, triggered a recession that started in 1990 and lasted into the fourth quarter of 1991. 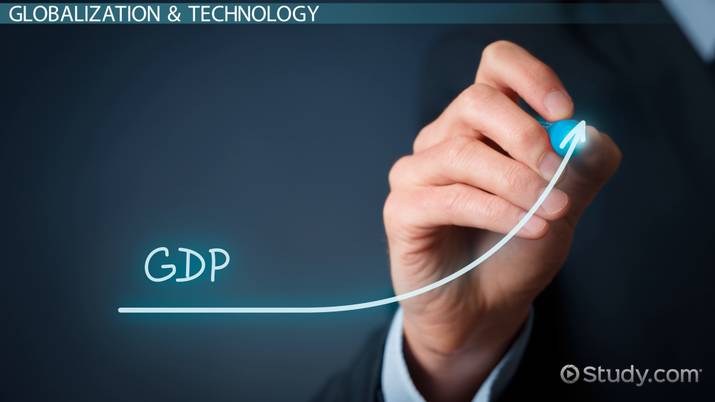 Coming up next: What Is Universal Health Care? - Definition, Pros and Cons

The Economic Boom of the 1990s

The economic boom of the 1990s began in the second quarter of 1991 when the total value of all goods and services produced in the economy, or gross domestic product (GDP), increased from -1.8% to 3.14%. From that point forward, for the next ten years, GDP growth was positive, with the highest quarter being the second quarter of 2000 when GDP was 7.7%. From 1990 to 1991, GDP grew from $5.5 trillion to $9.8 trillion. But how? There are three answers to that question.

First, globalization and technology was changing the economy and helping produce more goods and service. Second, economic growth feeds off itself by creating jobs. And third, the government slightly increased taxes and constrained spending to turn the budget deficit from the early 1990s to a budget surplus in the mid to late 1990s. Let's first take a look at globalization and technology.

Globalization, which is the increase in the amount of trade between countries, has rapidly expanded in the last thirty years. Technology has aided this expansion. Inventions such as fax machines, cell phones, and email have made this possible so people can work together from long distances.

These two factors are really partners, because technology encourages globalization and globalization increases technology, as new needs are identified and met. The 1990s was the period of rapid growth of both of these areas, including the signing of the North American Free Trade Agreement, better known as NAFTA, which allowed Mexico, the United States, and Canada to trade together much more easily, and other trade agreements throughout the world.

In total, over 23.6 million jobs were created in the 1990s, which made the unemployment rate drop to less than 5% in 1997, the lowest unemployment rate since 1973. It eventually dropped to 3.8% in March of 2000. While many of these jobs were in new sectors created by the technology boom, most were created as part of the business cycle. As the economy grows, people buy more stuff, so companies need to make more of that stuff, so they hire people to help make the stuff, so people have more money.

That business cycle continues until inflation spikes, and soon prices rise to where people can't afford the stuff, at which point companies make less, lay off people, and the cycle winds back down. That's what started to happen in March 2001. Then, with the aftermath of the 9/11 attacks, the economy that had been so strong in the 1990s came to an end.

Now let's take a look at government spending. In 1990, tax cuts from the 1980s and continued government spending had created a $220 billion deficit, meaning the government was spending $220 billion more than it generated, each year. This deficit flipped over to a surplus, a time when there's more money coming in than going out, between 1997 and 1998, with a 1998 surplus of about $70 billion. In just two more years, the surplus had grown to $236 billion. When the government runs a surplus, it's able to invest that surplus in infrastructure, such as federal highways and bridges. This creates more jobs. So again, government spending is another big reason that led to the economic boom of the 1990s.

Finally, let's take a look at some of the factors brought about by the forces of the financial markets. While not directly issues with the U.S. economy, there were economic events throughout the world that led to scares in the worldwide economy. About every year in the second half of the 1990s, there were foreign financial crises. While these might not seem like they'd impact the U.S. economy, some of the new growth in the U.S. economy was in the form of exports to these countries. In 1995 it was a crash in the Mexican peso, in 1997 it was a group of Asian currencies, in 1998 it was Russia, and in 1999 it was Argentina. However, none of these were significant to stop the growth in the U.S.

At the end of the 1990s, the price appreciation of the S&P 500 had provided an average annual return of 31.5%. The 'dot-com' bubble had taken the Nasdaq from just over 100 to slightly higher than 1,000, a ten-fold increase over the course of ten years. Finally, the Dow Jones increased from about 2,750 to 11,500, an increase of more than 300% over ten years. Certainly, to anyone vested in the financial markets, the '90s were a great year.

Let's review what we've learned about the U.S. economic boom of the 1990s. The 1990s started out with a rough start, mostly from the fallout of the 1989 Savings and Loan Scandal, which was a situation in which banks became too aggressive in their real estate lending and triggered a recession that started in 1990 and lasted into the fourth quarter of 1991. After this scandal, the 1990s became a period of economic boom for the U.S. This can first be credited to the increase in globalization, or the increase in the amount of trade between countries, and technology. This was also bolstered by trade agreements, like the North American Free Trade Agreement (NAFTA), which allowed Mexico, the United States, and Canada to trade together much more easily. This boom can also be attributed to the increase in jobs created, and better control of government spending.

Government spending in the 1980s had been implementing tax cuts while continuing government spending and had, thus, created a deficit, meaning the government was spending more money than it generated each year. In the late 1990s, this had flipped to a surplus, a time when there's more money coming in than going out, thanks in large part to decreased spending and slightly higher taxes. All of these things led to incredible returns in growth, both in terms of GDP (gross domestic product), which is the total value of all goods and services produced by the economy, and rates of returns in the financial markets, with GDP growth reaching a whopping 7.7% during the decade and the financial markets seeing ten-fold increases with the NADAQ and a 300% increase with the Dow Jones. These outcomes made the 1990s the longest and most significant increase in the U.S. economy ever.

The US Economic Boom of the 1990s
Related Study Materials

International Trade in the 1990s and Beyond

What is an Expansionary Gap? - Identifying an Economy That is Above Potential

Impact of the Cold War on Civil Rights in the U.S.

Effect of Globalization on the U.S. Economy

Women in the Progressive Era