The uterine cycle is also called the menses or menstrual cycle which takes place each month in preparation for a possible pregnancy. Learn about the menstrual cycle including why and how it occurs. Updated: 08/27/2021
Create an account

Ah...the menstrual cycle. That taboo word that conjures up images of mood swings, cramps and achy muscles. All of those unpleasant side effects come from the monthly changes that the uterine wall goes through during the female's uterine cycle (also called the menstrual cycle).

It all begins with the most painful part of the cycle - you know, the one that causes all those cramps and bloating - the onset of menses. Get it? Menses begins the menstrual cycle. And, the reason behind all of those uncomfortable side effects comes from the shedding of the uterine tissue during this phase of the cycle.

See, menses is when the functional zone of the endometrium (that's the inner layer of the uterine wall) begins to degenerate and shed its tissue. Okay, so now that we know what happens during menses, let's take a look at why and how. 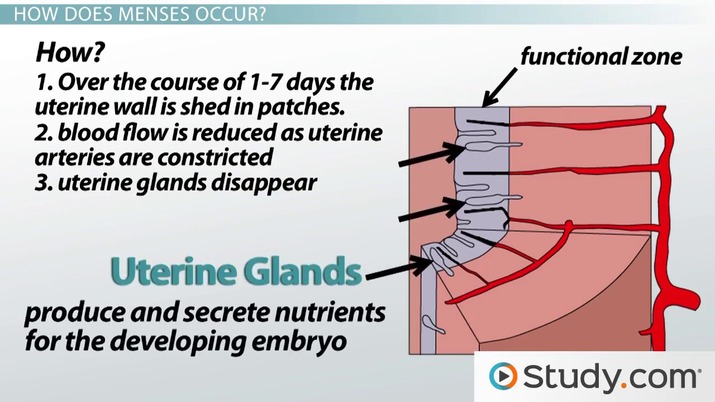 Try it now
Back
Coming up next: Luteal Phase of the Ovarian Cycle

Why Does Menses Occur?

We'll start with why. You may remember that the uterine wall initially builds up its inner lining - the functional zone - in preparation for pregnancy. Just in case the egg released by the female's ovaries that month gets fertilized. But, the majority of the time, the egg travels down the female's reproductive tract without getting fertilized.

So, then what? I mean, the uterine wall has gone through all this preparation, building up lots of tissue layers and blood vessels that would have helped protect and nourish the fertilized egg (also called an embryo). Kind of like preparing a guest bedroom for a guest that never arrived. The uterus has made up a bed with nice, new, clean sheets. So, what happens now?

If pregnancy doesn't occur, then the uterus doesn't need all those tissue layers it built up. So, it begins the process of breaking them down. You may be asking why. Why doesn't the uterus just keep the tissue layers around for the next month? Well, unlike the sheets on a bed that may stay clean if not used, the uterine tissue is alive, and it needs certain hormones from the fertilized egg to stay alive. In the absence of the fertilized egg, those hormones never arrive, and so, the tissue naturally starts to degrade.

How Does Menses Occur?

Let's move on to our next question. How does this happen? First, you should know that this shedding of tissue doesn't happen all at once. It takes time - a couple of days in fact. Over the course of one to seven days, the uterine wall is shed in patches.

To begin the process, the blood flow from the uterine arteries is reduced. Not all the blood flow, just the blood going to the functional zone of the endometrium. And, without blood, the tissue is now deprived of some things essential for survival. You know, like oxygen and nutrients - things that the tissues in your body need to survive.

First, the uterine glands begin to shrink. Their job was to produce and secrete nutrients for the developing embryo, but without a baby present, they are no longer needed. So, the parts of the uterine glands that are located within the functional zone disappear but the roots of the glands, located in the basilar zone, remain intact. It's kind of like plants and how during the wintertime the flowers and leaves die off, but the roots of the plant that are underground remain intact. Except in our case, the roots are located in the basilar zone of the endometrium, instead of underground.

Next, the tissue around the glands begins to deteriorate. That's just a fancy way of saying fall apart. Then, the arteries in the tissue become weakened and rupture. Now, what do you think happens when an artery ruptures? It releases a lot of blood, right? So then, what happens to all this broken down tissue and blood? Well, it can't just sit around in the uterus; that would be kind of unsanitary. So, the body needs a way to get rid of it. So, it exits the uterus the only way it can - through the vaginal canal and out of the body. This whole process of shedding and removing the old tissue is called menstruation. And, during menstruation, the body rids itself of around 35-50 ml of uterine blood and tissue!

I know, I know. The whole process sounds pretty unpleasant, right? But, just think of it as the uterus going through its monthly cleaning. Getting rid of all the old blood and tissue allows it to start all over again. Yes, you heard me correctly; it starts all over again. That's why it's called a monthly cycle, because it repeats itself. Well, that is, unless the female becomes pregnant. Then, the cycle is put on hold for a while.

But, if no pregnancy occurs, the uterine wall begins repairing itself almost immediately. Remember how we said that the tissue was shed in patches? Well, once one patch has been cleaned off, or removed, the layers underneath start to rebuild it. The rebuilding process takes place over the next two phases of the cycle - the proliferative and secretory phases. However, they are not the focus of this lesson, so before you move on, let's take a quick moment to review.

And remember, this is just the beginning of the uterine cycle. After menstruation, the uterine wall begins to re-build itself just in case the female gets pregnant the following month.

You will be able to explain what happens during menses of the uterine cycle after watching this lesson.