The Watergate scandal led to the disgrace and resignation of President Richard Nixon. Review the summary, facts, and timeline of Watergate to understand why it was scandalous. Understand that it began with a break-in, and recognize the role of the Oval Office tapes in prompting President Nixon to resign. Updated: 10/09/2021
Create an account

If you've ever heard the term 'Greek tragedy,' you may know that it's shorthand for a sad, regrettable event that didn't have to happen, and in fact wouldn't have happened, if only the characters had made different choices. For example, if only Oedipus hadn't killed his father, if Antigone hadn't buried her brother, if the quartermasters of the Titanic had turned two degrees more away from that iceberg…well, you get the idea. 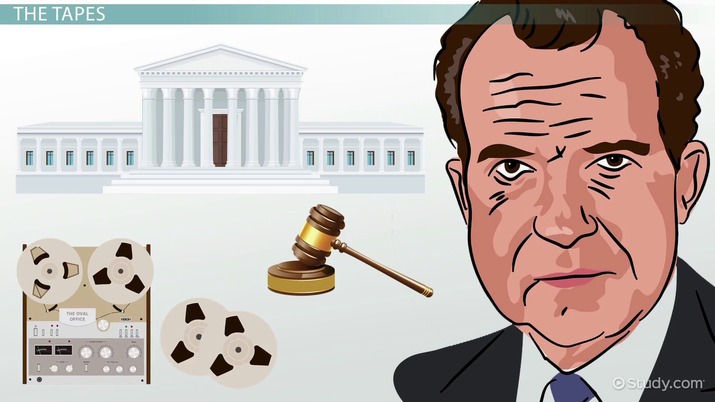 Coming up next: Watergate & the Saturday Night Massacre

The Watergate scandal hinged on a pivotal question posed by U.S. Senator Howard Baker during a senate hearing: 'What did the President know, and when did he know it?'

Richard Nixon won the presidency in 1968 in a tight contest with Democratic nominee, Hubert H. Humphrey. During that election, he ran as a moderate candidate, pledging to end the war in Vietnam with honor and to make a clean break from the controversial administration of Lyndon Johnson, his predecessor. By 1972, Nixon remained popular with most Americans and was expected to defeat his opponent, Senator George McGovern.

On June 17, 1972, two police officers responded to a report of a break-in at the Watergate, a hotel and office complex in Washington, D.C. where many political professionals lived and worked. That year, it was also the home of the Democratic National Committee (DNC). When the police arrived and entered the fifth-floor offices of the DNC, they surprised five men carrying surveillance devices they were trying to attach to the office phones.

One of the men was James McCord, a former employee of the Central Intelligence Agency and a Republican Party aide. In the address books of two of the burglars, police found the name H. Howard Hunt. A reporter at the Washington Post, Bob Woodward, discovered that Hunt had also worked at the CIA and was connected to the White House.

Over time, it became clear that Hunt was part of a group nicknamed the 'Plumbers,' because they stopped political leaks and who'd been conducting a 'dirty tricks' campaign against the Democrats for over a year. Their activities included canceling Democratic rallies, spying on candidates, and stealing confidential files.

In spite of the publicized break-in, President Nixon won in a landslide. But thanks to the continuing efforts of newspaper reporters, especially the Washington Post's Bob Woodward and Carl Bernstein, the story soon grew in importance. Eventually, legislators and the public learned that the Watergate burglars had been financed from a 'slush fund,' a secret money account, kept at the Committee to Re-Elect the President (CRP), or CREEP. In 1973, the U.S. Senate authorized a full investigation.

In the summer of 1973, the Senate began its hearings. During the testimony, they learned about a recording system installed in the White House, one that taped practically every conversation held in the Oval Office. The Senate committee insisted on having the tapes from the White House, so they could establish if the President knew about the break-in or the attempted cover-up that followed.

The President resisted, claiming that the conversations were protected under executive privilege. The term, executive privilege, refers to the president's right to withhold information from law or legislative authorities if he believes releasing it would compromise the public interest or security. According to President Nixon, the conversations held in the Oval Office were matters of national security; to make them public would prevent him from receiving frank advice and could endanger the country. However, the special prosecutor in charge, Archibald Cox, insisted on having the tapes.

On October 20, 1973, President Nixon fired Cox, and his deputy, William Ruckelshaus, resigned in protest. The Saturday Night Massacre, as it came to be called, convinced many Americans that the President was hiding something. Nixon denied this, claiming at a news conference, 'I'm not a crook.'

Eventually, the issue ended up in the Supreme Court. On July 24, 1974, the Court ruled unanimously that the President had to release the tapes, and Nixon finally relented. During the examination of the tapes, investigators found an 18 ½-minute gap in a conversation. The President's secretary claimed she had accidentally recorded over this portion of the tape, which was later deemed unlikely.

On a tape from March 21, 1972, the President's counsel, John Dean, was heard telling Nixon that the Watergate cover-up was a 'cancer on the presidency' and referring to the 'hush money' that was paid to the 'Plumbers.' 'The smoking gun' tape from June 23, 1972, revealed that, only a few days after the break-in, the President told one of his aides to inform the heads of the FBI and the CIA not to investigate the incident.

In early August of 1974, the House Judiciary Committee voted for three articles of impeachment. An impeachment process is a formal proceeding in which a government official is accused, and may be later prosecuted and removed from office, due to an illegal action.

However, before the whole House of Representatives could vote on the articles, Richard Nixon resigned. On August 8, 1974, he addressed the nation, saying that even though 'I have never been a quitter,' he could no longer continue to fulfill his presidential duties. One day later, Richard Nixon became the first President in the history of the United States to resign from office.

June 17, 1972: Five men are arrested during a break-in at the Democratic National Committee (DNC) in the Watergate Hotel and office complex in Washington, D.C.

June 19, 1972: The Washington Post reports that a Republican security aide, James McCord, was among the burglars.

October 10, 1972: The FBI establishes that the Watergate break-in was part of a larger 'dirty tricks' campaign funded by the Committee to Re-Elect the President (CRP).

November 7, 1972: Richard Nixon is re-elected in a landslide over Democratic nominee, George McGovern.

January 30, 1973: Two Nixon aides, G. Gordon Liddy and James McCord, are convicted of conspiracy for their roles in the Watergate break-in.

April 30, 1973: Having been implicated in both the break-in and the resulting cover-up, in which funds from the CRP were diverted as 'hush money' to silence the burglars, Nixon's top White House assistants, Bob Haldeman and John Ehrlichman, resign.

May 18, 1973: The Senate Watergate Committee begins its hearings.

July 24, 1974: The Supreme Court rules unanimously that President Nixon must relinquish the tapes made of conversations in the Oval Office.

The Watergate scandal began with a break-in at the Democratic National Committee headquarters at the Watergate Hotel and office complex on June 17, 1972. It eventually led to the resignation of President Richard Nixon.

When investigators discovered that the burglars were funded by the Committee to Re-Elect the President (CRP), the resulting scandal revolved around whether or not President Nixon knew about the break-in beforehand or the attempted cover-up that followed. After investigators learned about the elaborate taping system he used to record conversations in the Oval Office, a tense legal standoff took place between Congress and the President, with the latter claiming executive privilege because he didn't want to release the recordings. When the Supreme Court ruled unanimously that Nixon had to turn over the tapes, they revealed that, while he hadn't known about the break-in, he had participated in the attempted cover-up. Faced with an impending impeachment and lack of political support, President Richard Nixon resigned from office on August 8, 1974.

Ronald Reagan Accomplishments & Political Career | What Did Reagan Do?

Environmental Concerns in the U.S. in the 1970s

New Trends in American Life in the 1980s

Korean War Causes, Timeline & Effects | When was the Korean War?

What is a Presidential Veto? - Examples & Types