Peace and Tranquility on the Home Front

Well, it isn't always peaceful. The new government and President Washington were setting the tone for handling domestic issues. Under the Articles of Confederation, the government had been weak and ineffective. That cannot be the case anymore. This time, when a rebellion breaks out, the government is able to put it down effectively. Handling the domestic issues dealing with Native American tribes was very complex and led to some of the U.S.'s first military conflicts. To highlight these issues, in this lesson we will cover the Whiskey Rebellion and the Battle of Fallen Timbers. 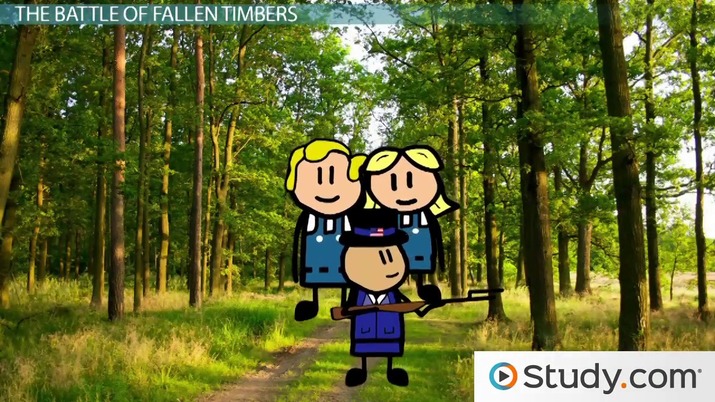 Coming up next: President John Adams: From Alien and Sedition Acts to XYZ Affair

After the Revolutionary War, the federal government agreed to take on the war debt of the states. To help pay these debts, the Secretary of the Treasury, Alexander Hamilton, put a 25% excise tax on all of the liquor sold in the United States. An excise tax is a tax on the sale or use of a product. This tax was strongly opposed by the farmers in the western areas of all states south of New York because they relied on producing whiskey to make a living. You see, transporting grain as liquor was much easier than transporting it as grain.

By 1794, the Whiskey Rebellion was in full swing. Tax collectors sent to Western Pennsylvania were routinely tarred and feathered, making it impossible to collect the whiskey tax there. That June, local officers ordered the leaders of the whiskey tax resistance arrested, but all this did was incite the farmers to more violence. A month later, the commander of the local militia was shot and killed by federal troops. The troops were defending a tax official. This really fired up the local anti-tax folks, who went on to burn down the buildings owned by the tax official.

Washington reacted by calling up a militia from several states. He put on his old uniform from the Revolution and led the army of over 12,000 troops himself. This ended the rebellion swiftly, with no blood shed. Rebels saw this overwhelming force commanded by General Washington himself and they instantly dispersed. The government had the authority and the means now to deal with something like this! President Washington pardoned the rebels to make sure there were no ill feelings from the crisis toward the new government. The outcome of the Whiskey Rebellion showed the supremacy of the federal government, but it did make people wary of the government's power.

The Battle of Fallen Timbers

This battle is not greatly talked about, but it certainly is important. It set the stage for settlement and the policies of the U.S. government in dealing with Native American tribes. You see, the British had signed deals with tribes guaranteeing their rights to lands in the Northwest Territory. Well, the new American government was not in the business of following the deals made by the British.

Since the federal government wasn't able to make money under the Articles of Confederation, it began selling off land in the Northwest Territory. The problem is, the tribes there had signed deals with the British guaranteeing the tribes' right to the land. This is what led to the issues.

White settlers began moving into the territory, which had been promised in writing by the British to Native Americans. Several tribes came together to form the Western Confederacy. It included villages from the Iroquois, Shawnee, Miami and many others. The tribes chose to fight, believing the British would support them - they were wrong. Fighting breaks out.

How does President Washington handle this? Well, his famous quote is '...in peace if I can, and to be prepared for war if I cannot.' He could not. The entire conflict is referred to as the Northwest Indian War. The tribal Confederation had several victories over American forces, and Washington did realize that much of the blame for violence belonged to the American settlers.

Still, he had to act. In 1792, President Washington ordered General 'Mad' Anthony Wayne, a hero from the Revolutionary War, to build a force to finish the issue. Wayne saw that earlier campaigns had failed because of lack of training and discipline. Current peace talks gave him time to train his volunteers. The war chief for the Shawnee was Blue Jacket. He and other tribal leaders held their ground, even as some, such as Mohawk leader Joseph Brant, tried to build compromise.

In 1793, Wayne's army of 4,600 men, the Legion of the United States, marched north from Fort Washington near modern Cincinnati, Ohio. Wayne was also aided by scouts from the Choctaw and Chickasaw tribes. Wayne used a tactic that made quick work of the battle. He sent out word of the attack plan but then waited a couple of extra days. He knew it was the custom of the area tribes to fast before battle. With the extra delay, the native forces were tired and weak.

The battle was over quickly. In retreat, the Native American forces fell back to Fort Miami, a British outpost. When they arrived, the gates were closed. The fort's commander was not willing to start a war with the U.S. Wayne stuck around with his army for several days, destroying the native force's villages and crops.

The battle led to the Treaty of Greenville in 1795. This ceded most of modern Ohio to the U.S. One young Shawnee veteran of the battle was Tecumseh. He did not sign the treaty, and years later, he renewed native resistance.

So a recap of the Whiskey Rebellion and the Battle of Fallen Timbers: the early days of the United States would set the precedent for how things are handled in the states. These early events showed the new government was willing to take action and look out for the new country's interests. In the Whiskey Rebellion, President Washington showed that the government would take action and back up its mandates. In the Battle of Fallen Timbers, the U.S. showed they had the military strength to assert authority over its borders, although they were in dispute.