In this lesson, we will meet the workers of the Industrial Revolution. We will examine the conditions under which they worked and lived, and we will learn about a few attempts to improve their situation.
Create an account

During the Industrial Revolution, people from the countryside flocked to cities and factory towns looking for a better life. They wanted to make more money to support their families, and they hoped to move up in the world. They believed that they had a wonderful opportunity to try something new and take part in an era of wonderful progress. Unfortunately, disillusionment soon followed when workers realized that their new life wasn't at all what they thought it would be.

In this lesson, we will meet a typical 18th century working class family and catch a glimpse of their lives. Englishman Thomas Worker had been a farmer for nearly his whole life, but he quickly adapted to the changes and moved his family to a nearby city to take a job at a textile factory. Like most workers, he wanted to do something different and interesting, but his hopes were soon dashed. Thomas ended up working 12 or 14 hours a day, six days a week.

His work was monotonous and mind-numbing as he clanked away at the same machine day in and day out. His supervisor constantly barked at him to work faster, but it was hot in the factory. Between the heat, the dirt, the noise, the poor ventilation, and the lack of light, Thomas was physically and mentally exhausted by the time he got home. On top of all that, he only made about $0.10 an hour, usually $8 to $10 a week. He knew he had made a mistake by giving up his land.

Thomas' wife, Mabel, worked in the same factory. She didn't want to, but it was the only way her family could pay the bills. Nearly half of the workers in the factory were women, and hardly any of them liked their jobs. They would rather have been at home, caring for their families like they did before moving to the city, and at the end of her long work day (she put in the same number of hours as her husband but didn't make nearly as much), Mabel had to go home, cook, clean, do the laundry, and take care of the children. She got very little sleep.

Thomas and Mabel's children, Johnny, age 14, and Jenny, age 8, did not attend school. Instead, they worked in the factory just as their parents did, but they earned only about a penny an hour. Johnny hated his work. He had seen a friend crushed by a machine and another boy punished for laziness by being forced to carry a heavy weight around his neck for an hour. The boy had never been the same since.

Little Jenny had started work just the year before. She was so small that she could fit easily between the huge machines, and her tiny fingers could reach where adult hands could not go. She was not even aware of the danger she was in every time she worked around those machines. Both children were pale, thin, and often sick. 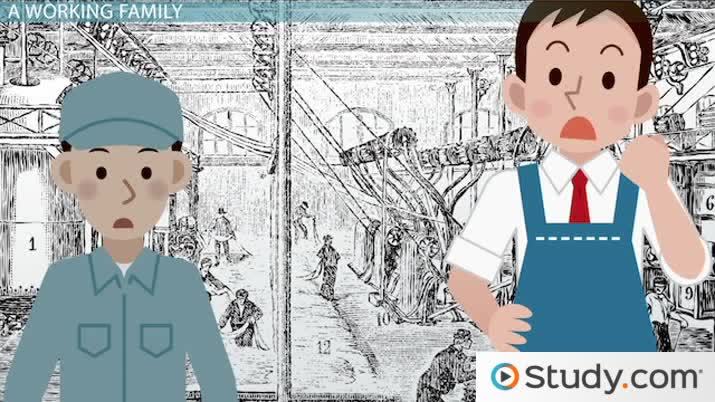 Unfortunately for the Worker family, their life at home wasn't much better than the hours they spent at the factory. The whole family crowded into a cheap, damp, one-room house that was connected back-to-back with several neighboring houses. Mabel was glad, however, that there were only four people in their family. Some of their neighbors had to cram nine people into one of those dreary little houses.

The neighborhood was dirty. Most people threw their household waste into the street or courtyard. Forty houses shared six toilets, which were little more than cesspits. Fresh water was hard to come by, as were open air, sunlight, and places for families to play or exercise. People were constantly getting sick, and outbreaks of cholera, typhoid, and other diseases killed many.

Needless to say, people didn't live long under those conditions. In 1841, the average life expectancy in England's rural areas was 45 years. In London, it dropped to 37 years, and in Liverpool, people were lucky to live to 26 years of age. Infants died at an alarming rate, and in the early 19th century, 25-33% of English children died before the age of five.

Workers could do very little to improve their lot. In 1799 and 1800, the British Combination Acts prohibited workers from forming unions. They could not bargain with their employers or petition for higher pay or better working conditions. Some laborers, however, formed 'friendly societies' to help ill or injured workers and the unemployed. These societies soon took on the role of labor unions, fighting for fair treatment and better laws and even the right to vote.

Another group of Englishmen decided that the best way to improve society would be to get rid of the Industrial Revolution altogether. These Luddites, as they were called, gathered in secret organizations that raided factories, threatened factory owners, and smashed machines. More moderate Luddites argued for laws to set minimum wages, regulate female and child labor, and organize unions. The British government treated the Luddites harshly, even imposing the death penalty of some of them.

Other British citizens took different routes to improve working class life. Philanthropists like Robert Owen built their own factories and towns, carefully regulating working and living conditions and treating their workers with respect and dignity. Unfortunately, these communities were few and far between. Some Englishmen embraced socialism, an ideology that called for the government to abolish private property and the free market, seize ownership of all the nation's wealth, and dole it out to all citizens in the form of jobs, housing, education, healthcare, and pensions.

Still others tried to work within the current system to make improvements. In 1832, the British Parliament appointed a commission to investigate child labor. Their findings resulted in the Factory Act of 1833, which banned children eight years old and younger from working in factories and limiting working hours for older children. Inspectors were assigned to make sure the law was enforced.

Further laws followed. In 1844, the government set a 12-hour maximum working day for women. In 1847, the maximum was dropped to ten hours for women and children. An 1850 law prohibited women and children from working before 6 a.m. or after 6 p.m. In 1874, a law set a maximum 56.5-hour work week for everyone.

In 1874, the government forbade children under ten from working at all and only half days for children from ten to 14 years old. In 1901, the government set a minimum working age of 12 years old. Even with these philosophies and attempts at reform, the daily lives of industrial workers, like Thomas, Mabel, Johnny, and Jenny, remained harsh, difficult, and dangerous.

Even though many 18th-century industrial workers took jobs in factories to try to improve their lives and move up in the world, they were soon disillusioned by long hours, low wages, and exhausting environments. Women and children also toiled in factories under the same harsh conditions. Home life was no better for these workers. They faced poverty, overcrowding, filth, and disease wherever they turned. Life expectancies were shockingly low amongst most city dwellers.

Workers could do little to improve their lot. The British government's Combination Acts of 1799 and 1800 prohibited them from forming labor unions, but they did create 'friendly societies' to support their fellow workers and fight for their rights. Some Englishman joined secret organizations of Luddites that tried to destroy the Industrial Revolution altogether.

A few industrialists, like Robert Owen, built and carefully regulated their own industrial communities. Other Britons embraced socialism. Starting with the Factory Act of 1833, the British government passed a series of laws that began regulating working hours, but it would be a long time before the daily lives of industrial workers would be anything but harsh, difficult, and dangerous.

Types of Physical Injury to Cells

Advancements in Western Civilization at the End of the 19th Century: Examples & Impact

Mohandas Gandhi and the British Invasion

Urbanization & Other Effects of the Industrial Revolution: Social & Economic Impacts