Mark has a doctorate from Drew University and teaches accounting classes. He is a writer, editor and has experience in public and private accounting.

'The World is Flat' by Thomas Friedman examines the role of technology in the 21st century. Discover why Thomas Freidman says the world is flat and study the 10 flatteners, as well as theories that seek to explain this phenomenon. Updated: 01/11/2022
Create an account

Say you have a good career as a radiologist. You make a decent living reading x-rays for several large orthopedic practices. Sounds like a secure professional future, or does it? The big downside is you have limited patient contact, and your work can be easily digitized and sent anywhere in the world for evaluation. Not feeling so secure now?

Thomas L. Friedman is an American journalist, author and columnist. He is perhaps best known for his book, The World Is Flat, A Brief History of the Twenty-First Century. Released in 2005, Friedman shares several insights resulting from his experiences during a trip to Bangalore, India, where he discovers the world is indeed flat!

During his trip to India, Friedman visited several companies changing the way business is transacted around the world. He met with chief executive officers to gain their perspective on how business has changed. What he learned from them was both sobering and frightening.

As computing power increased, processing speeds multiplied at an exponential rate and technology became more accessible and cheaper. Advancements in data transmission made it possible for information to travel around the world in seconds. Technology is the main reason the world flattened out, making us all global neighbors.

Friedman calls this new globalization of technology Globalization 3.0, which allowed people to collaborate and compete in real time. Intellectual work can now be dissected, distributed, returned, and re-assembled in minutes via email. This caused the global competitive playing field to be leveled or ''flattened.''

Friedman notes that prior Globalizations 1.0 and 2.0 were marked by countries and companies globalizing respectively. It's now software leading the change, not horsepower or hardware. 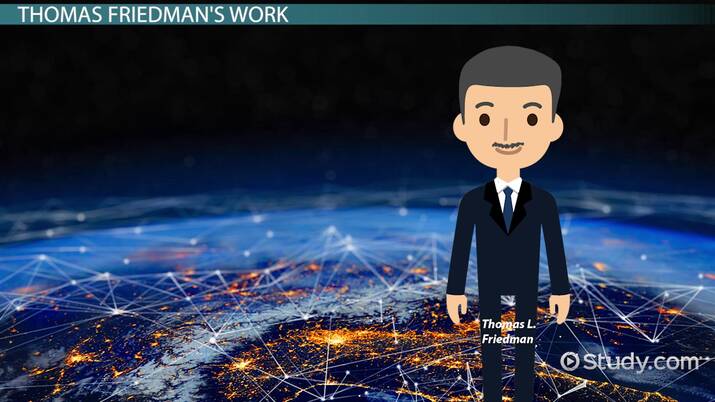 Try it now
Back
Coming up next: Warren Buffett: Biography, Education & Quotes

Friedman writes extensively about what he calls the 10 Flatteners. He explains that ''The world has been flattened by the convergence of ten major political events, innovations, and companies.'' These are:

Software makes outsourcing cheap and easy like reading x-rays overnight. While American radiologists are fast asleep, doctors halfway around the world are now able to read these films and provide a full report by morning.

Other basic tasks requiring little specialization or human interaction are prime candidates for outsourcing, where work is performed for a fraction of the cost. A word of advice from Freidman: goods are traded, but services are consumed. Everything but hands-on services can be outsourced.

Friedman warns, ''No matter what your profession - doctor, lawyer, architect, accountant - if you're an American, you better be good at the touchy-feely service stuff, because anything that can be digitized can be outsourced to either the smartest or the cheapest producer.''

While society was quietly plodding along, three major convergences took place, called the triple convergence. The first was the ability to multitask with one machine. Scanning, emailing, printing, faxing, and copying could all be done with one machine.

The second convergence was the marriage of new technology and new ways of doing business. It isn't enough to drop a few new computers into your office and expect a spike in productivity. Supporting processes and personnel need to be added to support and surround the new technology.

The third convergence was the entrance of three billion new people into the marketplace. Countries that hadn't been able to participate before were now able to collaborate and compete on a level playing field.

Late in the book, Friedman also discusses his Dell Theory of Conflict Prevention: ''No two countries that are both part of a major global supply chain, like Dell's, will ever fight a war against each other as long as they're both part of the same global supply chain.'' In other words, countries that go to war will have to consider the cost of losing their economic interests that have been developed in both countries as a result of this new globalization.

All right, let's take a moment to review what we've learned. American journalist and author Thomas L. Friedman was so inspired by a trip to Bangalore, India, that he wrote the book, The World Is Flat, A Brief History of the Twenty-First Century. In it he states that technology is the main reason why the world is now flat.

He speaks about the three globalizations:

He writes extensively about the ten events or trends he calls the 10 Flatteners that changed the world:

He also writes about how a triple convergence (which involved multitasking machines, incorporating business support needs, and billions more people able to participate) changed the world. We finally looked at how Friedman proposes the Dell Theory of Conflict Prevention, which posits that countries may be more hesitant to go to war now that they have so much economic stock in each other.

Supporting Your Message With Primary and Secondary Research

Ratios of Interest to the Short-Term Creditor

Effect of Globalization on the U.S. Economy