Michele has taught G.E.D. classes and has a Master's degree in history.

The XYZ Affair was an incident where three American diplomats sent to Paris were offered a bribe by three French secret agents: X, Y, and Z. Learn the impact of this event on the United State's relationship with the French in the later 1700s. Updated: 12/20/2021
Create an account

After the American Revolution, America was not doing well financially and needed to stay out of war. However, in 1793, Britain and France (who had always been competitors) were at war. Years earlier, during the American Revolution, France had helped America beat Britain and now expected America to help them in return. However, exhausted from war, America was going to stay neutral in the conflict.

Imagine that you had played a game of basketball for an hour straight. Once you got done, you'd want to rest, but instead of resting, your best friend wants you to play a soccer game. France wanting America to fight against the British was very similar to that. 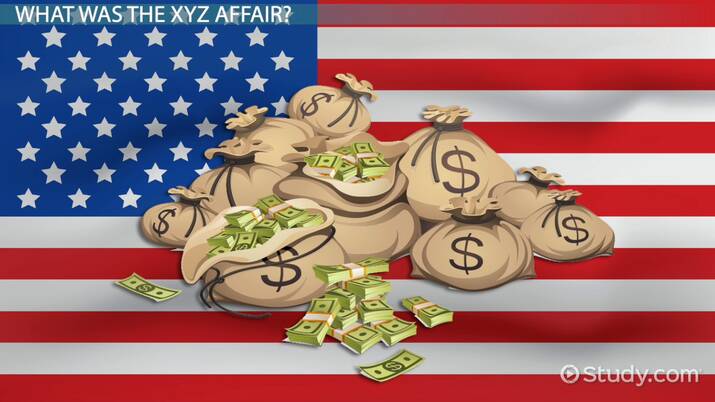 Try it now
Back
Coming up next: Lewis & Clark Lesson for Kids

What Was the XYZ Affair?

France felt that America was being an ally to, or supporting, Britain. Therefore, in 1797, France decided to get back at America. It seized American supply ships bound for Britain. U.S. President John Adams decided that he was going to try to avoid going to war with France. He sent three men to France to act as diplomats to keep the peace.

When the three men arrived in Paris, France, they were unable to meet with the French foreign minister, the Marquis de Talleyrand. Instead, they were approached by three French agents. The names of the agents were kept secret in legal communication and were simply called agents X, Y, and Z.

Shortly afterward, the American public found out and was not happy about it. Though America did not go to war, we did have a quasi-war, which means that America and France fought a few battles but never actually went to war. President Adams created the Department of Navy to fight France.

The U.S. Navy and French Navy fought several sea battles over the next two years. The U.S. Navy caught around 80 French ships and only lost one naval ship to France. Luckily, the two countries ended their fighting in 1800.

Alright, let's take a moment or two to review!

In this lesson, we learned about the XYZ Affair of the late 1790s. This was an event in which three American diplomats traveled to Paris, France, to meet with the French foreign minister, the Marquis de Talleyrand, but they were met by three French agents, known as X, Y, and Z, instead. The agents tried to bribe the Americans to keep the peace between France and the U.S., but the American diplomats refused to give in to their demands. Although there were some tension and a few sea battles, the XYZ Affair, and the quasi-war, essentially meaning, battles without war, with France did help create the U.S. Department of Navy, which still exists today.

Try it now
Back
Create an account
The XYZ Affair Lesson for Kids
Start today. Try it now
Social Studies for Kids