Erika has taught several college music courses and has a doctorate of musical arts in conducting.

In this lesson, you will learn about theme and variation in music. You will also learn about its form, as well as what differentiates a theme from a variation.
Create an account

What is Theme & Variation?

Theme and variation is a specific kind of form in music. The form of a piece of music tells you how the music is organized. With a theme and variation, the piece begins with a theme that is the main melody. That is followed by one or more variations of that melody. A variation is music that is similar to the theme but is also different enough that it does not repeat the melody exactly. 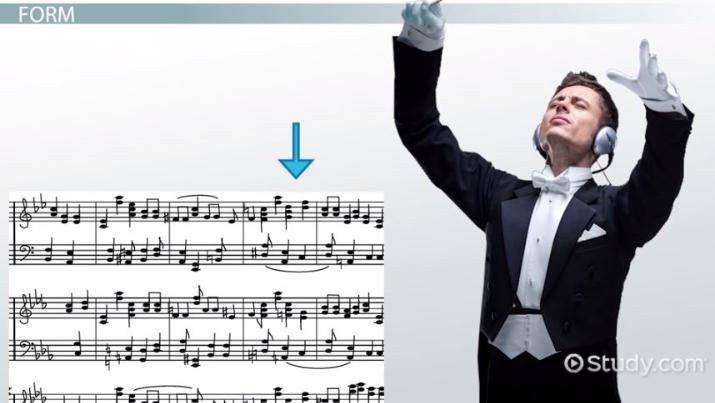 You can think of a theme and variations in a musical piece like cupcakes and the additional ingredients used to decorate them. You start with a basic cupcake (the theme) and then add some type of decorations on top (the variations). Some cupcakes might have frosting, some might have sprinkles, and some might have a creamy filling, but they are all still basically cupcakes.

There are two ways that the sections of a theme and variation are labeled. Sometimes the composer will simply label the sections in the music 'Theme,' 'Variation 1,' 'Variation 2,' and so on. You can also label the sections of the form by calling the theme the A-section, and then labeling each variation as 'A1,' 'A2,' 'A3,' and so on. Each 'A' indicates the same musical material is being used, while each number after an 'A' indicates that the section is a variation of 'A.' Let's take a closer look at each section of theme and variation.

The theme is the first main melody that you hear. It is the melody that the rest of the music will be based on. Sometimes the theme does not start immediately at the beginning of the piece but is preceded by an introduction. An introduction is a short statement of music that comes before the actual form of music begins.

The theme is usually the simplest sounding melody of the piece. If we think back to our cupcakes, a cupcake that represents the theme would have no decoration, frosting, or filling. It would be the simplest version of the theme.

A variation is music that is based on the original theme but is somehow different. A composer can vary the theme by changing the rhythm, changing the harmony, or by decorating the melody by adding additional notes. As long as the music is similar to the theme but not the same, it would be considered a variation. So, if the baker takes a plain cupcake and puts chocolate frosting on it, this would be a variation. If they put powdered sugar and sprinkles on it, this would be another variation.

As long as there is at least one variation of the theme, the piece can be considered a theme and variation. However, the number of variations can be different from one piece to another. There is no limit on how many variations can be in a piece of music.

Examples of Theme and Variation

The piece begins with an introduction. Then we hear the statement of the theme, which can also be labeled 'A.' The first few notes have been highlighted in green. If you compare the theme to each variation, you can see that the composer has decorated the melody differently in each variation, but the theme (highlighted in green) is still there. If we labeled the sections, the form of this piece would be 'Introduction,' 'A,' 'A1,' 'A2,' 'A3,' 'A4.'

A theme and variation is a form of music that begins with a main melody (the theme) that is then altered or changed in some way throughout the piece. These alterations of theme are called variations. Sometimes the music can start with a brief introduction before the theme is stated. The theme is usually the simplest statement of the main melody.

You should be ready to do the following after you finish this lesson: