Themes in literature are the important life lessons conveyed by the writer. Understand how to identify themes in literature through examples from 'The Monkey's Paw,' 'Rikki-Tikki-Tavi,' and 'Flowers for Algernon.' Updated: 10/20/2021
Create an account

Imagine this scene. An old man has you cornered at a family reunion. From the looks of him, he's been around since the 1800s. He looks you in the eye, pops in the dentures, and starts rambling about how in his day he had to walk to school - uphill, five miles, in the snow. He's not just yammering on to explain the differences between modern school systems and the education of yesteryear; he's got a point to make. The theme, or important lesson about life, that he's trying to say is 'be thankful for what you have.' You see, the only reason he brings up all those details about how hard life was for him as a child is to prompt you to be consciously thankful for not having those daily hardships.

Themes aren't only found in these types of tales; they're found in all stories. So when your teacher asks you about the theme of a piece of literature, whether that's a story or a play or whatever, she's asking you to tell her about one of the important life lessons you learned from reading the story. To help you understand better, I'm going to give you three examples of themes found in some of the most commonly read stories in middle school. By the end of the lesson, you should be ready to tackle some stories on your own! 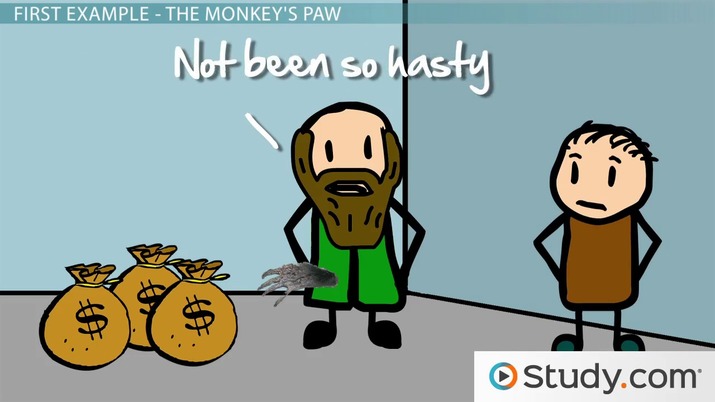 Coming up next: What Are Literary Motifs? - Definition & Examples

This first one is an awesome story - The Monkey's Paw. In it, a man gets a shriveled, supposedly-magical monkey's paw that he's told will grant wishes. He jokingly wishes for a bunch of money, and later that day he gets a knock on his door and learns that his son has been killed at work and the company is paying the family a bunch of money for their loss. The story follows up with a couple more wishes that go wrong, and the theme of the story, the lesson about life, is, 'Be careful what you wish for; you just might get it.' In other words, the reader should learn to consider all possible outcomes when making a decision, just as the father in the story should have done.

In middle school, so many students read a clever little story about a mongoose, Rikki-Tikki-Tavi. Rikki-tikki takes on a pair of cobras and eventually beats them by refusing to back down from them or fear them. Other animals do, and that gives the snakes power through fear, but not good ol' Rikki-Tikki. And there's your theme! 'Don't back down.' Easy as that. That's not to say that there aren't other life lessons to be learned in this story, but one solid theme is 'Don't back down.'

Finally, let's look at a classic, Flowers for Algernon. In this story, the main character, Charlie Gordon, is an adult with a mental disability who undergoes an experimental surgery, becomes super smart, and has it all taken away again when he goes back to his former state at the end of the story. One theme here is 'People shouldn't play God.' Or, put another way, there are certain lines that science shouldn't cross. See, Charlie Gordon does get a regular life and a dose of super intelligence to boot, but he gains so much that when he loses it all it's that much sadder. One of the doctors who invented the procedure brags that he has created a human being that's better than what nature made. Turns out, he was wrong.

Themes in literature are simply the lessons about life that we can learn from stories, poems, plays, and novels. Many works have more than one theme. In the story The Monkey's Paw, the theme is 'Be careful what you wish for; you just might get it.' In the classic story Rikki-Tikki-Tavi, the theme is 'don't back down,' and in Flowers for Algernon, you learn a lesson about life, that 'people shouldn't play God.'

Memorize this lesson's details as you get ready to:

How to Find the Theme or Central Idea

Creating a Bibliography: Lesson for Kids

Elements of a Short Story

Is The Giver a Dystopia or a Utopia?

Indirect Characterization in To Kill a Mockingbird