View bio
This lesson will explore the many theories on the origins of religion. In doing so, it will highlight the works of Kant, Muller, Frazer, Marx and Freud. It will also explain animism and nature worship.
Create an account

When discussing the origin of religion, it's important to remember the term 'religion' is broad and far reaching. Its meaning is as expansive as the masses of cultures that cover the earth. As we delve into the theories of its origin, we will treat them as such. In fact, they are the attempts of some famous philosophers, like Kant, Muller, Frazer, Marx and Freud, to make sense of the human desire to reach for something beyond ourselves. With this in mind, let's get started with the theory of Immanuel Kant.

To Immanuel Kant, an 18th century German philosopher, religion is the product of limited empirical reason. In other words, since there are things that are unexplainable by simply using the five senses, humans developed religion to fill in the blanks.

To Kant, religious beliefs are unprovable. Therefore, people are not religious due to their power of reason or their cognitive minds. On the contrary, religion is an act of the moral will. People will themselves to believe in religion - it is not a product of reason. 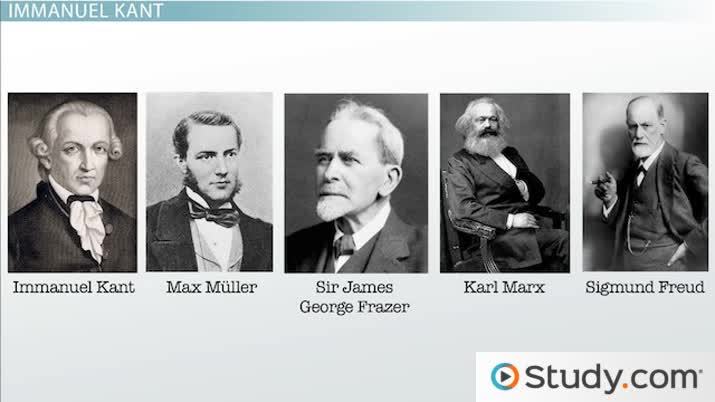 Different from Kant, the 19th century Max Muller held to the nature-worship theory. This theory puts forth the idea that religion developed as primitive people groups observed nature. As they observed the sun, moon, winds and rains, they began to personify them, sort of like our modern-day use of the term 'Mother Nature.'

According to Muller, this personification led to worship among the primitive people. As cultures grew, this worship became more structured. For example, there was Greece's Poseidon, god of the sea, or Babylon's Marduk, who controlled the winds.

Muller's nature-worship theory is closely tied to animism. In animism, all of nature is full of unseen spirits, which are to be worshipped. Practicing animism, the native cultures of the Americas believed that nature, from rocks, to trees, to water, had a spirit known as Anima. This spirit allowed them to feel and communicate with humans and each other.

Building on the role of nature, Sir James George Frazer's theories went a step further. Explained in his work The Golden Bough, Frazer believed that religion began as humans attempted to control nature.

To Frazer, the development of religion happened in evolving phases. First, humans tried to use magic to control their surroundings. This then evolved into imploring spirits in their effort for control. Adding to this, Frazer believed a highly evolved person will eventually desert the tales of magic and religion in acceptance of science.

Perhaps two of the most famous theories on religion come from the 19th century's Karl Marx and the 20th century's Sigmund Freud.

To Marx, religion stemmed from the struggle between social classes and is simply man's attempt to make living within these classes bearable. As his famous quote is often paraphrased, 'Religion is the opium of the people.'

Completely different from Marx, Sigmund Freud took a psychoanalytical stab at the origin of religion. To him, religion developed out of the human need for a protective father figure. In short, as humans age, they begin to see the weaknesses in their earthly fathers. A god figure steps in and gives humans a father in whom they can trust. In true Freudian style, he theorized that this need led men to create religion.

Just like the term 'religion' has many facets, the theories on its origin are also many. Throughout the ages, people have sought to understand the human need to reach beyond ourselves. In an effort to understand this phenomenon, theories abound!

For Kant, religion developed as people tried to make sense of things that reason could not explain. For Muller, religion originated as man observed nature and its workings, personifying it as cultures developed. Frazer added to this by purporting that religion evolved in phases and would eventually be replaced by science within the evolved mind.

Adding to these theories of origin, the famous Karl Marx believed religion was man's attempt to deal with the difficulties of social class. From a completely different perspective, Freud linked the origin of religion to man's need for a father figure in whom he could trust.

After this lesson, you should be able to describe several theories on the origin of religion, those of: Kant, Muller, Frazer, Marx and Freud.

Prompts About Theories on the Origins of Religion:

Write an essay of approximately two to three paragraphs that answers the following question: According to Immanuel Kant, why did humans develop religion?

Example: Consider the role of the five senses in comprehending the world.

In an essay of at least one page, describe Max Muller's nature-worship theory on the origins of religion. In your essay, be sure to explain the concept of animism.

Example: Consider how the notion of Mother Nature came into being.

In at least two to three paragraphs, explain James George Frazer's theory of how religion developed in separate phases. Be sure to address Frazer's theory about the connection between religion and nature, and also note his views on science.

Example: Frazer theorized that humans first tried to use magic to control nature.

Create a poster, chart, or some other type of graphic organizer that compares and contrasts the theories on the origins of religion of Karl Marx and Sigmund Freud.

Example: Freud used psychoanalysis to come up with his theory on the origins of religion, whereas Marx used the concept of class struggle.

Theories on the Origins of Religion: Overview
Related Study Materials

The Tibetan Book of the Dead: Summary, Translation & Quotes