Theosophy is a modern-day religious movement closely tied to Hinduism that seeks the unity of all humanity. Learn about theosophy, the brotherhood, Brahman, reincarnation (or samsara), and Mahatmas. Updated: 09/30/2021
Create an account

The study of the ancient faith of Hinduism usually includes mention of a modern religious movement known as Theosophy. Founded in New York City and not the Eastern World, Theosophy has at its center a unity among all people and can be loosely defined as a modern-day religious movement very closely tied to Hinduism.

With this unity in mind, Theosophy claims to have no special connection to one particular religion. Founded in the late 19th century by Helena Petrovna Blavatsky and Henry Steel Olcott, Theosophy seeks the unity of all people under what they term the Brotherhood.

However, Theosophy has Hinduism written all over it, leading some to classify it as a Western offshoot of the ancient faith. In today's lesson, we'll take a closer look at Theosophy. When we're finished, it'll be up to you to decide whether it stands alone or whether it's Hinduism merely Westernized and renamed. 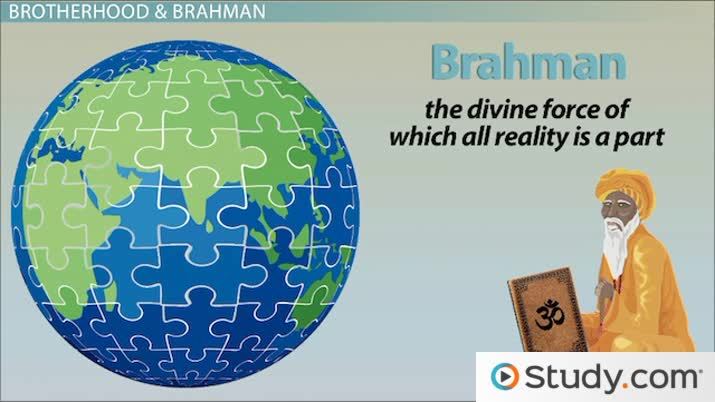 Coming up next: Gautama Buddha: The Founding of Buddhism

For starters, the Brotherhood of Theosophy is believed to be established under an ancient wisdom or force that is eternal and unchangeable yet rather vague and rather unknowable. With this hazy definition, Theosophy maintains that all humans are actually a part of this mystical force. When compared to the Hindu belief in Brahman, or the divine force of which all reality is a part, the similarities between Theosophy and Hinduism become evident. They both believe all of reality, even humans, are merely parts of a divine and universal whole.

Adding to this, Theosophy's main belief system comes directly from the ancient Hindu philosophy known as the Vedanta. In light of these facts, it's not hard to see why some see this New York-born faith as merely Hinduism with a Western twist.

In addition, Theosophy holds to the ancient Hindu belief that all of us are in a continual cycle of death and rebirth. Called reincarnation in the Western world, Hinduism refers to this very belief as samsara. When you take into account that Theosophy also upholds the Hindu beliefs of idol worship and the Hindu caste, or social stratification, system, it's again rather easy to see why Theosophy shows up in most Hindu courses.

At this point you might find yourself asking, 'Well, what are the differences between Theosophy and Hinduism?' If you are, know for sure you're not alone! In fact, most of the differences are rather hard to spot. However, one huge one is that Theosophy makes no religious distinction between men and women. This is very unlike Hinduism that sees women as dependent upon men for their spiritual maturity and even salvation.

Apart from this, many scholars would say most other differences are rather minor.

Rather than differences, a better thing to focus on is probably Theosophy's additions to Hinduism. The main one being the addition of a belief in powerful humans called Mahatmas.

Made popular by Theosophists in the late 19th century, the name Mahatmas was attached to great souls who were believed to possess supernatural powers. Although human, it's believed these Mahatmas embody hidden powers that allow them to manipulate the natural world. With this power, they believe Mahatmas act like transmitters, even mouth pieces, for the divine and mystical Theosophical force we discussed in the beginning of the lesson. In short, they theorize that only Mahatmas can guide the rest of us normal folks through the cycles of reincarnation and one day on to ultimate unity and happiness.

Very, very loosely compared to the Western idea of a saint, this Theosophist label has been applied to some famous modern-day Hindu leaders. Perhaps most popular of all the Mahatmas is the uber-famous Mahatma Mohandas Gandhi who led India to its 20th century liberation from the British. According to modern-day Theosophists, it was Mahatma Gandhi who once said, 'Theosophy is Hinduism at its best!'

Founded in New York City, Theosophy is a modern-day religious movement very closely tied to Hinduism. As its target, Theosophy seeks the unity of all humanity. This unity of all people is known to Theosophists as the Brotherhood.

Adding to Hinduism, Theosophist made famous the belief that certain humans are actually embodied with supernatural powers. Known as Mahatmas, Theosophists believe these rather supernatural humans act almost as mouth pieces for the divine yet vague power that encompasses all reality. So popular did this belief in Mahatmas become, that the term has been used to label some of our modern world's Hindu leaders, the most famous being Mahatma Mohandas Gandhi himself.

So there we have it - Theosophy in a very quick nutshell. Now it's up to you decide. Is it a standalone faith or is it Hinduism with a modern Western twist? Where do you stand?

Playing and reviewing this video lesson could enhance your ability to:

Theosophy and Hinduism's Reaction to the West
Related Study Materials