Did you know the thigh is the part of the lower appendage proximal to the knee? The muscles of the thigh move the leg at the knee. This lesson will identify the major muscles involved in flexion and extension of the leg at the knee, including the hamstrings and quadriceps femoris groups. Updated: 01/15/2020
Create an account

I grew up playing backyard football. It was great fun and certainly a lot of exercise. Every now and then, my buddy would pull the ball away just as I was about to kick it. Sound familiar? I would get mad and everyone would laugh as I fell on my backside. Among others, we will discuss the muscles used to kick that football in this lesson.

It is anatomically correct to refer to that part of the lower appendage proximal to the knee as the thigh and distal to the knee as the leg. In general, muscles located in the hip region will move the thigh, and muscles located in the thigh will move the leg. Most of the thigh muscles are contained within two large groups of muscles referred to as the quads, which extend the leg at the knee and the hamstrings, which flex the leg at the knee. These muscles are innervated by the sciatic, femoral, and tibial nerves. Sciatica is a condition resulting from compression of the sciatic nerve. A person experiences lower back pain, leg pain, and leg weakness in association with sciatica. 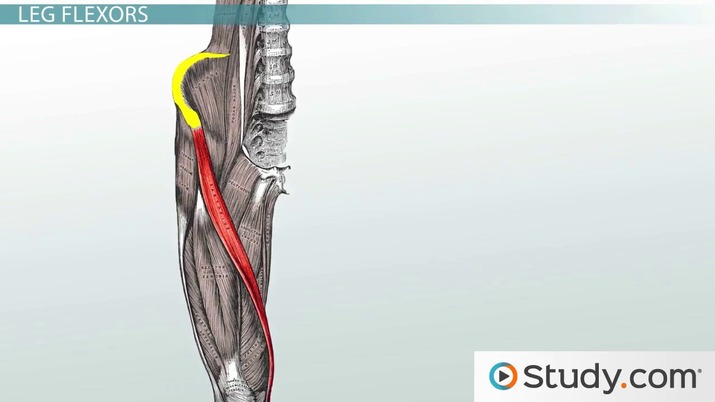 We did what we called butt kicks in track practice to get faster. This exercise required us to flex our legs so our heels would actually kick our buttocks.

Let's start with the hamstrings group. The hamstrings group is composed of three muscles, all of which produce flexion of the leg. These muscles are located in the posterior compartment of the thigh, which is the back side. The biceps femoris is a double-headed muscle, hence the prefix bi. The long head originates from the pelvic girdle, while the short head originates from the femur. Both heads insert on the fibula and tibia of the leg.

Now, let's move on to leg extensors. My daughter loves to play soccer. Let's take a look at some of the muscles she uses when she kicks the ball. She extends her leg at the knee as she drives in a goal for a score. The quads, or quadriceps femoris, are a group of four muscles responsible for extension of the leg at the knee. These muscles are located in the anterior compartment of the thigh, and they're deep to the sartorius, which we just talked about.

The rectus femoris originates from the anterior-superior iliac spine and inserts on the tibia via what we call the patellar ligament. Now, let's stop here for a minute. Recall that a ligament attaches bone to another bone, whereas a tendon attaches muscle to a bone. So, the patellar ligament attaches the patella to the tibia. Rectus means straight and femoris refers to the femur, which helps us to remember this muscle's fiber arrangement and its location.

Muscular Function and Anatomy of the Upper Leg

Muscular Function and Anatomy of the Lower Leg and Foot

The Relationship Between Population, Sample & Generalizability

Muscles of the Head and Neck: Anatomy, Motion & Support

Function & Anatomy of the Muscles of the Chest and Abdomen

Bones of the Leg and Foot: Names, Anatomy & Functions