View bio
In this lesson, we will learn about the family tree in ~'Things Fall Apart.~' We will learn about Okonkwo's relationship with several members of his family, including his sons, Nwoye and Ikemefuna, and his daughter, Ezinma. Updated: 06/15/2021
Create an account

In a family tree, the ancestors and their descendants within an extended family are shown as a network of connections. This is the case with the complex family tree present in Things Fall Apart by Chinua Achebe.

Okonkwo had three wives. His first wife is never named but simply referred to as ''first wife'' or ''Nwoye's mother.'' As is apparent by her names, the first wife was there to bear children for her husband. They have three children: two sons and a daughter.

Okonkwo has another adopted son, Ikemefuna. Okonokwo's father is Unoka. 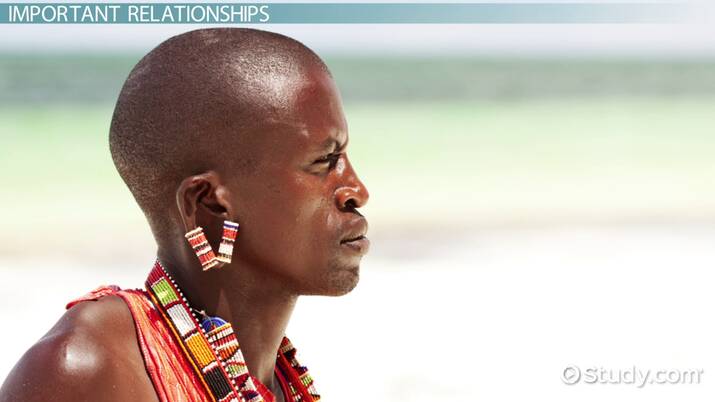 Okonkwo is continually afraid of appearing weak like his father, Unoka. In order to prevent this perception, he ends up harming his family and his family relationships.

Okonkwo always sees his eldest son Nwoye as weak and lacking masculinity. In an effort to toughen him up, Okwonkwo frequently beats Nwoye. On the other hand, his adopted son Ikemefuna is exactly the kind of man that Okonkwo wishes to see. He still prevents himself from showing affection, though, because he thinks it will make him appear weak. When Ikemefuna murders someone and is sentenced to death, Okonkwo ensures the death sentence is carried out in order to once again appear strong.

Growing up, Ikemefuna helps his adopted brother Nwoye grow into manhood in order to please their father. Okonkwo notices and appreciates the changes in Nwoye but still refuses to show affection, continuing to fear that Nwoye is truly weak at heart. When Nwoye becomes a Christian it proves his weakness to Okonkwo who subsequently disowns him.

The only child that Okonkwo can feel proud of is his daughter Ezinma, the daughter of his second wife. She seems to understand Okonkwo. She is a beauty, just as her mother was when she was younger. He wishes that she were a boy so that he could have the perfect son. Yet Okonkwo can still never let himself show affection to even Ezinma for fear of appearing weak.

Okonkwo has a relationship with one other family member, his uncle (his mother's brother), Uchendu. Okonkwo is banished for seven years for accidentally killing a boy. During this banishment, Uchendu takes Okonkwo and his family in and tries to teach Okonkwo to not take his family for granted.

Okonkwo never learns to control his fears. This fear of appearing weak leads to hatred toward the white men and Christianity, nearly leading to war. When Okonkwo sees that the war will never succeed, he hangs himself.

All right, let's take a moment to review what we've learned. In this lesson, we looked at the family tree present in the novel Things Fall Apart by Chinua Achebe. We learned that a family tree is basically a network of connections between the ancestors and their descendants within an extended family.

Okonkwo has three wives. His first wife's role is to bear children. They have three: two sons and a daughter. The oldest son is Nwoye, who is never strong enough in his father's eyes. He ends up being disowned by his father. His adopted son Ikemefuna is executed for murder. He feels a connection to his daughter Ezinma but can never show affection to her for fear of appearing weak.

This lesson explained the complex family tree that you can find in Things Fall Apart by Chinua Achebe. Take a look at the following activities to improve your understanding.

There are many ways of representing a family tree on paper. Now that you understand the relationships between all of the characters in this book, draw your own family tree representing them. You should take care to choose colors that represent different kinds of relationships, but the specific ways that you choose to draw the tree are up to you. Consider how the characters interact and your feelings about them when drawing your tree.

Choose one character in the family tree and think about them in great detail. What are they like? What are their important relationships? Write a paragraph about this character, being careful to explain their place in the family. If you want, you can also include drawings or images to visually represent this character and their journey over the course of the book.

Do some of your own research to find out more about when and why Chinua Achebe wrote and published this book. Think about what the author was trying to communicate and how that ties into the representation of family in the novel. Write an essay explaining your thoughts on this subject with reference to the novel and its family tree whenever possible.

The Week of Peace in Things Fall Apart

The Role of Women in Things Fall Apart