View bio
The Third Amendment is part of the Bill of Rights in the United States Constitution and grants homeowners the right to refuse to allow soldiers to reside in their homes. Investigate the reasons why the Third Amendment was written and why the amendment continues to be needed in the 21st century. Updated: 12/28/2021
Create an account

A House Is Not A Hotel

Have you ever had guests that stayed too long? Maybe you had to sleep on the couch so your guests could use your room, or they ate all your favorite cereal. Whatever happened, you probably just wanted them to leave!

The first ten amendments, or additions and changes, to the Constitution are called the Bill of Rights and list additional rules that protect the rights of citizens. The Third Amendment is included in the Bill of Rights.

No soldier shall, in time of peace be quartered in any house, without the consent of the owner, nor in time of war, but in manner to be prescribed by law.

This amendment means that no solider can be quartered, or be placed to live in, people's homes without their permission. For example, if soldiers came to your home, they could only live there if you gave them permission. 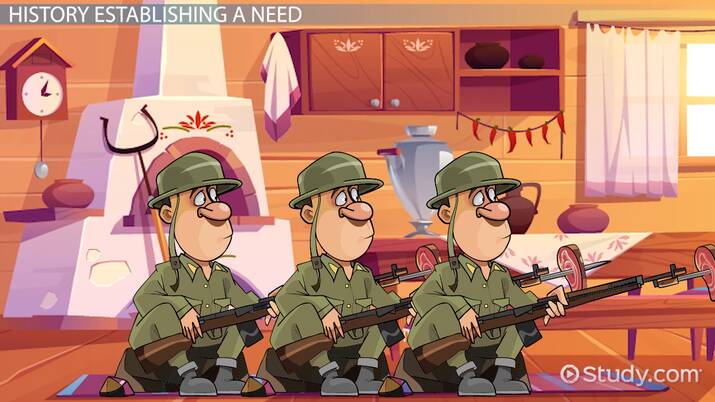 Coming up next: Branches of Government: Lesson for Kids

Although having a soldier living with you may seem strange today, there was a time in history where this amendment was important to American families.

Before the United States became its own nation, the American Colonies were ruled by Great Britain. In 1765, the British government passed the Quartering Act, which required the colonies to pay for buildings to house British soldiers or allow them to live in the colonists' homes. The colonists were also required to provide the British soldiers with food and other items. Imagine if your home became a hotel for soldiers!

The colonists didn't like the Quartering Act and began to question whether quartering British soldiers was fair. Some colonists were forced to house multiple soldiers at one time. This meant their own family had to cram into a smaller space. Feeding the soldiers took away from the families' food supplies, and the British soldiers could treat the family however they wanted.

Not only could a British soldier take your bed and eat your food, but they could be as mean to you as they wanted! After winning the Revolutionary War, Americans wanted to make sure that quartering wouldn't happen again.

The last time the Third Amendment was really necessary was during the Civil War. As the North and South fought each other, soldiers were sometimes quartered in private citizens' homes; however, these citizens had to give permission for the soldiers to live there while the fighting was going on.

Today, the Third Amendment is important because it protects Americans from being forced to quarter soldiers in their homes. Additionally, it helps define the right of people, and not the government, to decide who can live in their private homes.

The Third Amendment is a part of the Bill of Rights, or the first ten amendments, as an amendment to the United States Constitution, which is a document that was written to organize the government and establish its basic jobs. The Third Amendment to the Constitution protects Americans from the forced quartering of troops in their homes, a precedent set by the colonists' rejection of the British government's passage of the Quartering Act in 1765, which required the colonies to pay for buildings to house British soldiers or allow them to live in the colonists' homes. The Third Amendment means that Americans have the right to decide if soldiers are allowed to live in their homes.

Prompts About the Third Amendment for Kids:

Create a set of flashcards that provides the definitions of all of the terms that are in bold from the lesson (United States Constitution, Bill of Rights, Third Amendment to the Constitution, quartered, Quartering Act).

Example: The Bill of Rights is the first ten amendments of the U.S. Constitution.

Example: Three-fourths of the states approved of the Third Amendment in 1791.

Pretend that you are an American colonist during the Revolutionary War. Due to the Quartering Act, you have one or more British soldiers living in your home without your permission. Write a letter to a friend that describes how inconvenient it is to have the soldier(s) staying at your home and why you are angry about it. Your letter should be at least half a page in length.

Example: You woke up this morning hoping to start your day off with a cup of tea, but the soldier in your house had already helped himself to your tea supply and drank all of it!