In the last three months of gestation mark periods of rapid growth for fetuses as their organs and senses mature and refine. Explore the third trimester of fetal development: the seventh, eighth and ninth months of pregnancy. Updated: 08/24/2021
Create an account

Ahh, here we are - the final round! The last trimester; the end is just around the bend, or the corner. During this last stretch, our mother is probably sleeping in a recliner, has swollen ankles and might be just a tad bit moody or sensitive.

As our fetus enters this third and final trimester, it is considered to be viable. That means that if it was born prematurely, he or she has a high chance of survival.

That's because the majority of organ formation has been completed by the beginning of the third trimester. Now, you may be thinking, 'Then why do we need the third trimester?' Well, even though most of the organs are developed, the third trimester helps to mature them, readying them for the world outside of the mother. It also gives the bones and muscles time to get larger and stronger.

Let's take a brief look at some of the main events that occur during the third trimester. First up: month 7. 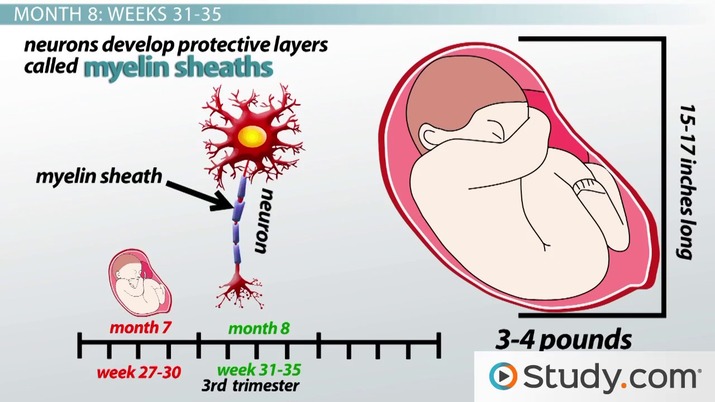 Coming up next: Childbirth: The Role of Hormones in Labor and Delivery

Month 7: During this month, our previously wrinkly fetus begins to add fat layers and plump out, and he or she begins to see! Okay, maybe not in the way that you and I see, but the eyes (which now even have eyelashes) begin to open. And, as month 7 ends and month 8 begins, the photoreceptors in the eyes will begin to distinguish light from dark. This ability to see will continue to develop even after the baby has been born, as they gain the ability to see colors and learn to focus.

Similarly, the brain also continues to develop, adding more connections between neurons and removing connections that aren't being used. This process will also continue after the baby is born, as they learn things like language and take in the world around them.

Also, while our fetus began to hear sounds during the second trimester, it can now start to differentiate high and low pitches of sounds.

As we progress into month 8 (weeks 31 - 35) these changes will continue as the eyes, brain, ears and other organs continue to mature.

Month 8: The brain and rest of the nervous system begins to protect itself by forming layers of an insulation-like material, called myelin, around the axons of neurons (those are the cells of the nervous system). This will increase the speed at which neurons can communicate to each other.

Just like the brain continues to mature, the lungs do also. During month 8, the lungs begin to develop air pocket cells called alveoli that will help the baby breathe after birth. Fat also continues to accumulate, and by the end of month 8, the fetus is around the size of a pineapple, though not quite as prickly as a pineapple. And he or she can certainly move around a lot: somersaults, kicking and having a good ol' party inside mom's tummy!

But we're almost done - only a few weeks left as we enter month 9.

Month 9: The last month of our third trimester, it usually includes weeks 36-40, but in some cases, pregnancy can extend longer - up to 42 weeks.

These last few weeks are putting the final touches on our fetus, preparing him or her to enter the outside world and preparing for the transition from the safety of the mother's womb to the sound-, light- and color-filled world outside.

In preparation, the ears continue to adapt to sounds, and the fetus even learns to identify the mother's voice. Not only can he or she recognize their mother's voice, but it is thought that they also start to develop taste preferences based on foods that the mother consumes during this last month.

The lungs and the digestive system finish maturing, muscles grow stronger and by now, our little boy or girl has a firm hand grip and the ability to grasp a parent's finger.

Once our fetus has reached full size (anywhere between 5 to 9 pounds, depending on the baby), he or she starts producing hormones that will trigger labor and uterine contractions. These contractions will propel the baby out of the uterus and into the outside world.

A lot happened over those 9 months in mother's womb! Let's take a moment to review the changes during the third trimester.

This period ranges from month 7 to month 9 of gestation. During these last 3 months, the fetus continues to grow and mature as it prepares to enter the outside world.

Next step: labor - the birthing process, which is that wonderful (yet painful) transition from the mother's uterus to the outside world.

Upon completion of this lesson, you should be ready to describe a fetus's development during the third trimester.