Charis has taught college music and has a master's degree in music composition.

Thomas Morley was an influential English composer during the Renaissance who brought the Italian madrigal style of songwriting home. Learn about Morely's early years and the influence of polyphonic choral music on him, and the impact of the catchy, light-hearted style of his madrigals. Updated: 10/17/2021
Create an account

'Now Is the Month of Maying'

Now is the month of Maying,

when merry lads are playing!

Have you ever heard the lyrics to the song 'Now Is the Month of Maying'? Maybe not, but tens of thousands of people have sung these words every year for five hundred years. Even The Beatles and The Rolling Stones can't match that record. How does a song have such long-lasting appeal? Mostly because Thomas Morley, English madrigalist extraordinaire, knew how to compose a catchy tune. 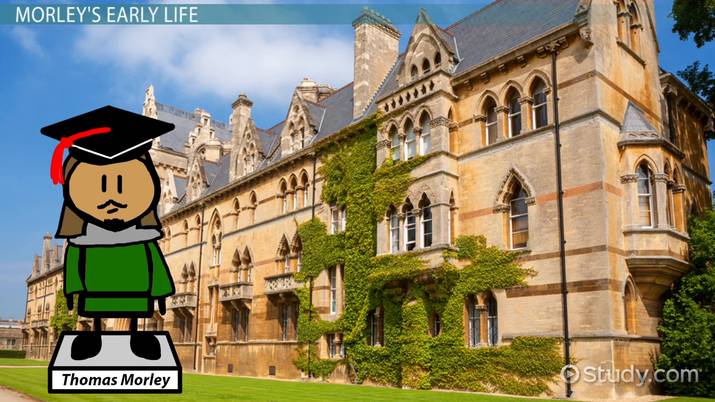 Coming up next: The Oratorio: Composers, Definitions & Examples

No details are known about Thomas Morley's early years. He was born in 1557 or 1558 in Norwich, England. He may have trained as a boy chorister at the Norwich Cathedral, but this is conjecture. He was possibly a government spy. He did receive musical training from the prominent composer William Byrd. His first music position was at the Norwich Cathedral as 'master of the children,' or the chorus master.

Morley was a skilled organist. He became the organist at St. Giles and followed that up with the more prominent organist position at St. Paul's in London. He also earned a Bachelor of Music degree from Oxford University. In 1592, Morley became a gentleman of the Chapel Royal, the organization responsible for providing all the music for the British court. This was a great honor and the highest position he could hope to attain in England.

Morley was influenced in his early years by his teacher, William Byrd. Byrd was a master of sacred polyphonic choral music. Polyphonic music has more than one melody sounding simultaneously. The polyphony employed by Byrd was broad and slow, ponderous and serene in its attempts to set the proper tone for worship services. Morley composed a handful of pieces in a similar style, but he soon found his own voice with the Italian madrigal.

Madrigals were polyphonic secular songs usually composed for four or five voices. The Italian madrigals were often light-hearted, fun, and about love. They were tremendously popular in Italy. It wasn't long before the madrigal rage spread throughout Europe. Morley published 25 canzonets, Italian 'little songs', in 1593, his first collection of songs in the Italian madrigal style. This was his true gift. Composing madrigals with English texts become his artistic focus for the rest of his life.

Morley published several more sets of secular vocal music, including canzonets, ballets, and madrigals. Several of his songs are still performed widely today and are considered masterpieces of the genre. High school choirs around the world sing, 'Now is the month of Maying' and 'My bonny lass, she smileth.' These songs are an excellent example of the Morley style. They use rapid polyphonic passages, imitation between the voices, and sections of homophony, a single melody accompanied by the other voices, to balance the polyphony.

In 1597, Morley published a comprehensive treatise on the art and theory of composition titled, A Plain and Easy Introduction to Practical Music. This book would be influential for many generations of composers. It is consulted today as an important reference on the state of music in the 16th century.

Morley's last collection of original music was 'The First Booke of Ayres,' published in 1600. He also edited a volume of madrigals by many different composers written in praise of Queen Elizabeth. This volume, 'The Triumphes of Oriana,' was published posthumously in 1603. Thomas Morley died in London, England, in October 1602. He was in the prime of life. He left us hundreds of songs, music for the Anglican worship service, and various instrumental pieces. Yet he will always be honored as the man who brought the joy of the Italian madrigal to England.

Thomas Morley was born in either 1557 or 1558 in Norwich, England. He studied with the composer William Byrd and was influenced by Byrd's style. Morley held several organist positions. In 1592, he became a gentleman of the Chapel Royal. Morley was most influential for bringing the Italian madrigal style to England. Other composers followed in his steps and began setting English madrigals. Morley's songs are still very popular today and are widely performed. Thomas Morley died in 1602 in London, England.

Madrigal in Music: Definition & Examples | What is a Madrigal?

Motet Music, Characteristics & Renaissance Role | What Is a Motet?

Haydn's Surprise Symphony Overview & Analysis | What Is Haydn's Symphony No 94?