Thomas Paine's 'The Age of Reason' was influential in questioning the church and making deism popular in America. Find out about the introduction and summary of 'The Age of Reason,' the definition of deism, who Thomas Paine was, and Paine's philosophy. Updated: 09/13/2021
Create an account

So what was The Age of Reason? The Age of Reason was a series of influential pamphlets written by Thomas Paine throughout the 1790s and into the early 1800s. The three-part work, published in 1794, 1795, and 1807, was officially called The Age of Reason; Being an Investigation of True and Fabulous Theology, but it's commonly just referred to as The Age of Reason. The work was an attack on orthodox Christianity. Paine, who was a deist, advanced the notion that God existed but insisted supernatural occurrences in the Bible were nothing but myths. In The Age of Reason, he also attacked the Church as being corrupt and too institutionalized. The Age of Reason received a mixed reception but was nevertheless important in promoting deism as an alternative to traditional Christianity. 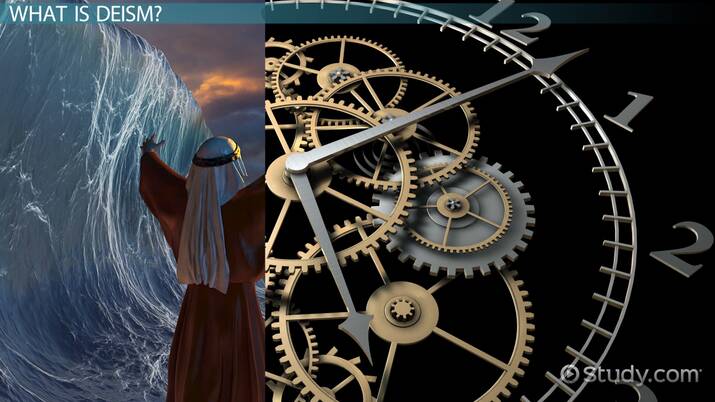 Coming up next: Satire in Dr. Strangelove

Before we dig in any deeper, let's talk about deism very quickly. We can't understand the whole point of The Age of Reason without understanding this concept. So what is deism? Deism is a theological view that affirms the existence of God but denies He has any supernatural or miraculous dealings with the universe. Deists regard miraculous occurrences as scientifically impossible. Many deists have explained their view by comparing God to a clock-maker. Just as a clock-maker creates a clock and then sets it in motion, so too God created the universe and set it in motion according the principles of natural law. This means the universe runs according to scientific and rational principles. God doesn't interact with the universe in any supernatural ways. Deism was a direct product of the Enlightenment and was extremely popular in Europe and the United States throughout the 1600s to early 1800s. In America it peaked in the mid-1700s.

Who Was Thomas Paine?

So now that we know what deism is, let's look at Thomas Paine. Thomas Paine was born in England in 1737. He immigrated to America in 1774. There he became an ardent patriot and took up the cause of the American Revolution. As a writer and political theorist he was a very influential man. One of his most famous works is Common Sense, written in 1775-1776. Common Sense promoted the idea of American independence from Great Britain by arguing that it was 'common sense' that America should be free of British rule. In addition to The Age of Reason and Common Sense, Paine's other important works were the Rights of Man and The American Crisis.

The Age of Reason

As mentioned before, The Age of Reason was a three-part treatise attacking orthodox Christianity. It was published in America in three sections in 1794, 1795, and 1807. The work affirmed the existence of a supreme being who created the universe but denied the possibility of supernatural intervention within the universe. Paine regarded the stories of miracles in the Bible as myths. He argued God's revelation was not supernatural in nature but could only be understood through reason. Paine also questioned the historical accuracy and the literary quality of the Bible. Finally, The Age of Reason attacked the Church as being too politicized and institutionalized.

A good way to understand the view put forth in The Age of Reason is to read Thomas Paine's personal creed that appeared toward the beginning of the work. It was meant to be a parody of Christian creeds, like the Apostle's Creed or the Nicene Creed. Here it is at length:

I believe in one God, and no more; and I hope for happiness beyond this life.

I believe in the equality of man; and I believe that religious duties consist in doing justice, loving mercy, and endeavouring to make our fellow-creatures happy.

But, lest it should be supposed that I believe many other things in addition to these, I shall, in the progress of this work, declare the things I do not believe, and my reasons for not believing them.

All national institutions of churches, whether Jewish, Christian, or Turkish, appear to me no other than human inventions, set up to terrify and enslave mankind, and monopolize power and profit.

I do not mean by this declaration to condemn those who believe otherwise; they have the same right to their belief as I have to mine. But it is necessary to the happiness of man that he be mentally faithful to himself. Infidelity does not consist in believing, or in disbelieving; it consists in professing to believe what he does not believe.

The Age of Reason received a mixed reception. To many Christians it was deemed a blasphemous work, but to those who espoused Enlightenment ideals, it was met with a warm reception. It was an important work because it helped re-popularize deism in America.

Let's take a few moments to review what we've learned. The Age of Reason was a series of influential pamphlets written by Thomas Paine throughout the 1790s and into the early 1800s, written and published in three parts in 1794, 1795, and 1807. His work attacked the church as being corrupt and too institutionalized. The Age of Reason received a mixed reception, but was nevertheless important in promoting deism as an alternative to traditional Christianity.

The Age of Reason promoted deism, which is a theological view that affirms the existence of God but denies God has any supernatural or miraculous dealings with the universe and suggesting that the idea of God was that he was a clockmaker and that the universe adhered to natural law, meaning that the universe runs according to scientific and rational principles.

Overall, it was an attack Orthodox Christianity. He also attacked the institution of the church. The Age of Reason helped popularize deism in America, in which Paine had already made an impact with his work Common Sense, written in 1775-1776, and which promoted the idea of American independence from Great Britain by arguing that it was 'common sense' that America should be free of British rule. At its time, The Age of Reason was a very influential work and remains so to this day, especially in areas like politics and philosophy, and even the sciences.

A Model of Christian Charity by John Winthrop | Summary & Analysis

Iroquois Creation Story Summary & Interpretations | The World on a Turtle's Back