In research, the strength of the relationship between the dependent and independent variables can be affected by threats to internal validity. Explore threats such as maturation, which can be addressed by creating separate experimental and control groups, as well as selection and selection interaction, which are remedied by the random assignment of subjects to a condition. Updated: 10/01/2021
Create an account

David is a psychologist. He believes that eating breakfast makes students smarter. In particular, he thinks that if elementary school children eat a healthy breakfast every day, they will pay attention more in class and will become better readers.

To test his theory, David goes to a local elementary school and gives a reading test to Mrs. Pringle's second grade class. Then he arranges for a local catering company to come in and give the students a healthy breakfast every school day for six months.

Six months later, David gives the reading test to Mrs. Pringle's class again. This time, they do much better on the test. So that's it, right? David's study has proven that eating a healthy breakfast makes students better readers.

But wait a minute. What if the students improved their reading skills because they did a lot of reading during that six months? What if Mrs. Pringle taught them lots of great things and that made them better readers? How does David know that the breakfast was responsible for the improvements in reading that he's observed?

There are several problems that arise in research that can lower internal validity, though. Let's look at three common threats: maturation, selection, and selection interaction. 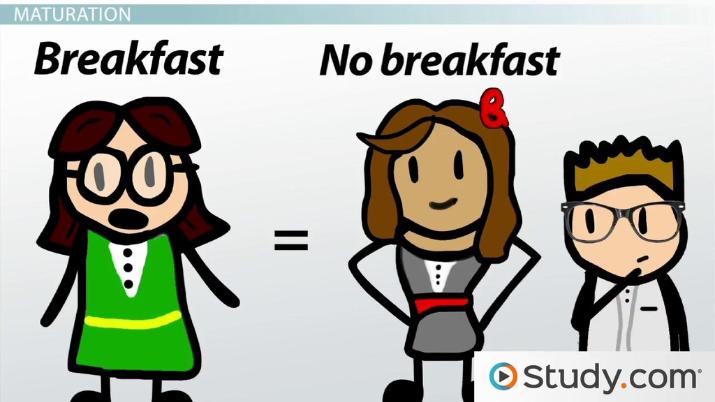 Remember that David gave breakfast to Mrs. Pringle's second grade class for six months, and then discovered that their reading improved. He believes it's because of the breakfast.

But Mrs. Pringle's class is older now, and more mature. How do we know that they didn't become better readers just because they are older and have more experience reading?

This is a good example of the threat of maturation. Anyone who's ever been around a kid knows how quickly they grow and learn; a second grader can become a better reader in a matter of days, just based on the pace at which her brain is developing and the amount of written text that she's exposed to.

And maturation happens with older people, too. Imagine a 20-year-old worker at a factory whose only interest is hanging out and playing video games with his friends. Fast forward a year, and the same worker might not be much older, but maybe he has a baby at home to support. The way he responds to things is vastly different now.

So how can someone like David control for, or eliminate the effect of, maturation? The easiest way is to have a control group, or group of subjects that do not get the same treatment as the main, or experimental, group that he's studying.

For example, Mrs. Pringle has a friend down the hall, Miss Travis, who teaches second graders, too. She and Mrs. Pringle use the same textbook and teach the same way. But David doesn't give Miss Travis' class breakfast; they have to do without.

So, David decides to use Miss Travis' class as a control group and give Mrs. Pringle's class breakfast and then compare the results of the two classes. But what happens if Mrs. Pringle is a more experienced teacher than Miss Travis and has a better method of teaching?

In this case, David might have a selection threat to internal validity. This occurs when the two groups are different in a fundamental way other than the focus of the experiment.

In other words, if Mrs. Pringle is a better teacher than Miss Travis, you'd expect her class to show more gains in reading by the end of the year than Miss Travis' class. In that case, the breakfast might not be the thing causing the change in reading skills: the selection of the subjects is.

The best way to avoid problems with selection is through random assignment. That is, instead of choosing Miss Travis' class for the control group and Mrs. Pringle's class for the breakfast group, David could flip a coin to decide which class gets the breakfast. Better yet, David will have many, many test classrooms and randomly assign all of them to one of the two conditions.

Have you ever heard the expression that something is 'greater than the sum of its parts?' That's what happens when selection interacts with another threat to internal validity.

Because David has selected Mrs. Pringle's class to get breakfast, and because the two classes are maturing at two different rates, selection and maturation are interacting.

In statistical analysis, an interaction is signified through multiplication, and that's just what happens in real life. If you think of selection threat as being a level 4 and maturation as being a level 3 threat, you can add them up to get 7.

But in an interaction, it's like you're multiplying the problems, so instead of adding the two up to get a level 7 threat, you multiply them and end up with a level 12 threat! In other words, together, these threats are greater than the sum of their parts.

Internal validity is when a researcher can prove that only the independent variable caused the changes in the dependent variable. There are many threats to internal validity. Three common threats include selection of subjects, maturation of subjects over time, and selection interaction with other common threats, like maturation.

What is Internal Validity in Research? - Definition & Examples

Carryover Effects & How They Can Be Controlled Through Counterbalancing

Regression To The Mean in Psychology: Definition & Example