Manuela has master's degree in counseling and has taught psychology, social psychology, and a tests and measurements course.

Memory is a complex, three-stage process that lets us learn and recall information and moments from our lives. This explanation of memory includes the three stages involved in memory: encoding, storing, and retrieving information. Updated: 08/25/2021
Create an account

An Overview of Memory

While we might take memory for granted, it is actually a complex process that allows us to learn and recall vast amounts of information every moment of every day. It's such a complex process that, although memory has been studied for many years, psychologists aren't entirely sure how it works. What psychologists do know is that the brain's hippocampus, thalamus, and amygdala are all involved in the complex process of memory. They also agree that the three stages involved in the memory process are encoding, storage, and retrieval of information. 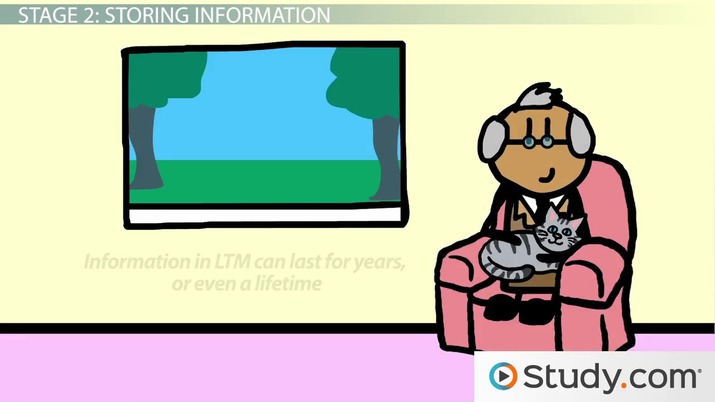 Coming up next: Robert Sternberg in Psychology: Theory, Creativity & Intelligence

The first stage of memory is encoding. When we are exposed to information of any kind, we take the information and begin processing it in visual, acoustic, and semantic form. This means that we take information, either as a picture or a sound or that we give the information meaning. One way to understand encoding is to think of it as the method that you use to lay the groundwork for remembering information.

Let's look at an example. You look at your professor's phone number on the syllabus because you have a question about an assignment. As you look at the number, you are using visual coding. If you say the number to yourself a couple times as you reach for the phone, you are coding acoustically as well. You might notice that the phone number is just one digit off from an old number your parents used to have when you were younger, and you think about how slim the odds are of something like this happening. The words that you use in your self-talk give meaning to the number, so you have also used semantic coding. The groundwork for remembering your professor's phone number is in place.

Storing information is about keeping the information available so that it can be recalled at a later point. There are two main types of memory, short-term memory (STM) and long-term memory (LTM).

The phone number for your professor, if not attended to, could be recalled only for about 20-30 seconds. If you looked at (visual), rehearsed (acoustic), and/or thought about how it looks so similar to your parents' old phone number (semantic), then it could eventually move to LTM. The key to storing information in LTM is repetition. The more you think about it or use it, the greater the chance of storing the phone number in LTM. You can try it out. If you look at a number only once, you won't be able to recall it the next day or even ten minutes later. On the other hand, if you repeat the number, visualize the number, and/or dial the number frequently over time, it will move to LTM. By the way, you can also try this with your studies. Frequent reviewing of exam material will go to LTM.

Encoding, storage, and retrieval are the three stages involved in remembering information. The first stage of memory is encoding. In this stage, we process information in visual, acoustic, or semantic forms. This lays the groundwork for memory. The second stage is storing information so it can be recalled at a later point. There are two main types of memory, short-term memory (STM) and long-term memory (LTM). The third stage is retrieval. Retrieving information can be done through association or through questioning.

Memory and Information Processing Over Time