Explore the types of ecological pyramids, which organize the types of organisms in an ecosystem. Discover the characteristics of number pyramids, biomass pyramids, and energy pyramids, as well as why each type is significant to biologists. Updated: 12/13/2021
Create an account

What Is an Ecological Pyramid?

When you think of a pyramid, you'd probably think of the Great Pyramids of Egypt. Or maybe a human pyramid of cheerleaders comes to mind. Although these aren't quite the same as an ecological pyramid, the basic concept is there: pyramids generally have a larger base, with levels that decrease in size as you move towards the top. Instead of humans or stone, ecological pyramids are made of different organisms in an ecosystem.

Every ecosystem can be broken down into trophic levels. Each organism in an ecosystem can be categorized into one of these levels based on how it gets its energy, or food. Producers are organisms that make their own food, usually via sunlight, and supply energy for the whole ecosystem. Since these form the energy base for all other life, we always put them on the bottom of an ecological pyramid. Primary consumers, the next level on the pyramid, are any organism that eats only producers. Secondary consumers are carnivores and eat primary consumers. Lastly, tertiary consumers feed on both primary and secondary consumers. These guys are at the top of the food chain and thus are shown at the top of the ecological pyramid. 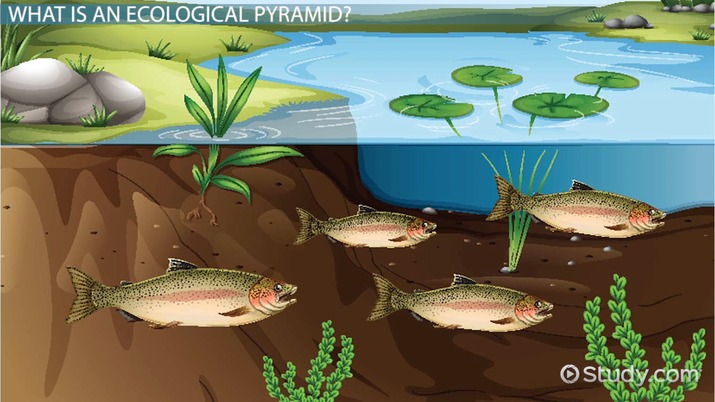 Try it now
Back
Coming up next: What Is Succession in Biology? - Definition & Examples

Number pyramids are ecological pyramids that show the actual number of organisms in the environment. Usually there are the most producers, since they supply energy for the rest of the pyramid. As we move up in trophic level, the number of organisms usually decreases. This is because less energy is available to the next level from the previous. In fact, this is known as the 10% rule in biology, which says each trophic level only gets 10% of the energy of the level below it.

For example, when plants absorb energy from the sun, they get 100%, or all of that energy. But they have to spend some to live, grow and reproduce. So when a caterpillar eats the plant, they can only get, at most, 10% of the energy the plant originally received from the sun.

This continues upwards, so the amount of energy available at each trophic level decreases. Normally, if there is less energy, there are less organisms able to be supported. For example, in the grasslands of Mid-West America, the grass has immense numbers. Primary consumers such as bison and rabbits are much less numerous, so a corresponding number pyramid would take on a traditional look.

However, there are ecosystems that do not look like this. If the producers are very large and take up a lot of space, there may be fewer total than tiny primary consumers that would multiply very quickly. For instance, in Yosemite National Park, the giant sequoia trees can grow over 200 feet tall. One tree easily supports thousands of primary consumers in the form of caterpillars, flies, and other insects. So the pyramid may be inverted depending on the particular ecosystem.

Biomass pyramids are ecological pyramids that represent the mass of all living things in a particular trophic level. The mass of living things in a given area is referred to as biomass; the prefix 'bio' means life. In a biomass pyramid, all that matters is how much mass there is, not necessarily the number of organisms. Sometimes this can result in an unusually shaped pyramid.

Let's look at an ocean ecosystem as an example. Phytoplankton are microscopic organisms that are producers in the ocean. There are millions of phytoplankton in the ocean, far more than there are primary consumers. However, when added together, all of the fish, whales, crustaceans, octopi and other primary consumers in an ecosystem have more mass than the phytoplankton. Let's look at some numbers.

Energy pyramids represent the most accurate depiction of energy transfer in any ecosystem. These pyramids obey the 10% rule for all ecosystems. Since each trophic level only gets 10% of the energy before it, each level must decrease in energy by a factor of 10, producing a perfect pyramid.

Ecological pyramids are diagrams that show the flow of energy between the different trophic levels of an ecosystem. Number pyramids depict how many organisms are in each trophic level. Often, there will be more producers than other organisms, but if the producers are large and repopulate slowly, there may be more primary consumers.

A similar phenomenon happens in a biomass pyramid, which shows the total mass of organisms of each trophic level. Some are organized as expected, but others, like those of ocean ecosystems, have far smaller producer levels than consumers. The energy pyramid is the most reliable for showing true energy transfer due to the 10% rule, which states that each trophic level only gets 10% of the energy from the level before it.

Human Food Chain Overview & Examples | Who is at the Top of the Food Chain?

Biomass Pyramid for a Marine Ecosystem

Human Food Chain Overview & Examples | Who is at the Top of the Food Chain?

Biomass Pyramid for a Marine Ecosystem