Thromboemboli is a blood clot that can be caused by injury to a blood vessel or when blood flow is restricted. Understand the definition and causes of thromboembolic and venous thromboembolism, and examine treatments for thromboemboli. Updated: 09/30/2021
Create an account

One summer I wanted to make deviled eggs for a picnic. This meant I had to remove the shells from a bunch of hard-boiled eggs. I put the egg shells down the garbage disposal thinking it would easily chop them up and dispose of them. What happened was the egg shells were too much for the disposal to handle and I ended up clogging the drain. If you have ever clogged up a drain by dropping an object or objects into it, then you already have a fairly good understanding of thromboemboli.

Thromboemboli are blood clots that travel from the site where they formed to another location. When they lodge in that distant location, they clog up the flow of blood, much like my egg shells clogged up the flow of water down my drain. In this lesson, we will learn about thromboemboli, their causes and treatments. 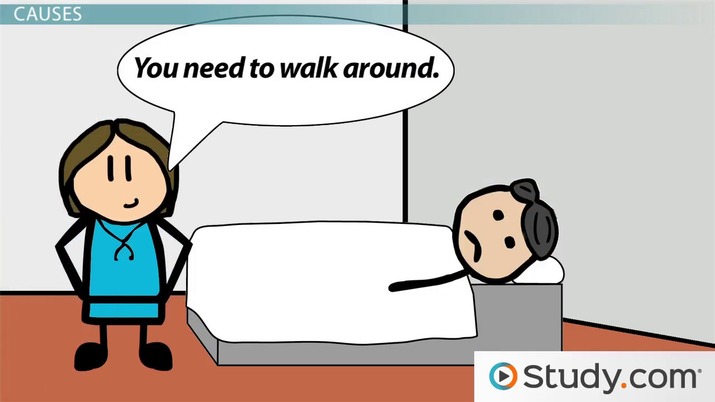 A thromboembolus, which is the singular form of the term 'thromboemboli,' is really the meshing together of two terms. We see the term 'thrombo,' which is short for 'thrombus.' This is the medical term for a stationary blood clot. We also see the term 'embolus,' which is the medical term for an abnormal substance circulating through the bloodstream. This abnormal substance could be many different things. Anything from air to a fat globule can be considered an embolus. However, in the case of a thromboembolus, we are specifically talking about a blood clot that has formed in a blood vessel, has broken loose and is now on the move.

So you're probably thinking that it is not good to have a blood clot traveling through your blood vessels, and if you're thinking that, then you're right. This freely moving blood clot can easily travel into a smaller vessel and obstruct blood flow.

Let's look at a common example of this. Deep vein thrombosis is a blood clot that forms in a deep vein of the legs. The clot can stay in place and block blood flow within the leg. If this is the case, the person with the problem could experience symptoms, such as pain, swelling and increased warmth over the site of the clot.

The clot could also break loose. When this happens, we often see a clot that moves into the lungs, which is called a pulmonary embolism.

A pulmonary embolism can block blood flow to a lung artery and damage the lung. This can lead to additional symptoms, such as shortness of breath and sharp pain. When a patient has deep vein thrombosis and pulmonary embolism together, we say that patient has a condition called venous thromboembolism (VTE), a fairly common and sometimes fatal disorder.

So what causes these clots to form? The formation of blood clots can be due to injury to the blood vessel that could include surgery or inflammation that damages the inner lining of the vessel.

Blood clots can also form when blood flow is sluggish or restricted due to a lack of motion. This is why nurses encourage hospital patients to get up and move around and why travelers are advised to avoid long periods of sitting.

The main goals for treatment of thromboemboli include stopping existing blood clots from growing, preventing stationary blood clots from breaking free and reducing the risk of future clots.

To accomplish these goals, patients are often treated with anticoagulants, which are commonly referred to as blood thinners because they are medications that reduce the blood's ability to clot. This is a fairly easy fact to recall if you remember that the prefix 'anti' means 'against' and the term 'coagulate' means 'to thicken.' So anticoagulants literally are against the thickening of blood or, in other words, blood thinners.

Two common anticoagulant medications are warfarin and heparin. An interesting fact about warfarin is that it was originally introduced as a form of rat poison.

Thrombolytics are another treatment option. They are medications that dissolve blood clots. Again we can break down the term to help us remember what it does. We already know that 'thrombo' refers to blood clot and 'lytic' refers to destruction. So thrombolytics are literally used for 'blood clot destruction.' These medications are very effective, and because of this, they can cause excessive bleeding, so their use is typically reserved for life-threatening situations.

Thromboemboli are blood clots that travel from the site where they formed to another location.

It is not uncommon for blood clots to originate in the legs. Deep vein thrombosis is the term used to describe a blood clot that forms in a deep vein of the legs. The clot can stay in place and produce localized pain, swelling and warmth, or it can break loose. A clot that moves into the lungs is called a pulmonary embolism. This can result in additional symptoms, such as shortness of breath and sharp pain. When a patient has both deep vein thrombosis and pulmonary embolism, they have a condition called venous thromboembolism (VTE).

The formation of blood clots can be due to injury to the blood vessel, potentially from surgery or inflammation. Blood clots can also form due to a lack of motion as might be seen in hospital patients or travelers.

What Is Thrombosis? - Definition, Symptoms & Treatment

Necrosis Types & Examples | What Is Necrosis?