Thylakoids are tiny compartments inside chloroplasts that assist in the process of photosynthesis by absorbing light. Explore the definition, structure, and functions of thylakoids and their correlation with photosynthesis. Updated: 10/11/2021
Create an account

When we learn about living cells, we should have a basic understanding that all cells contain numerous organelles (subunits within cells) with different and specific jobs. In both animal and plant cells, we find very similar organelles, but there are obviously differences between animal and plant cells. One is that animals lack a cell wall; another is that plants contain something called a chloroplast. Inside of the chloroplast, we find an important structure: the thylakoid. It is inside this thylakoid that the magic happens in that we see the creation of food. 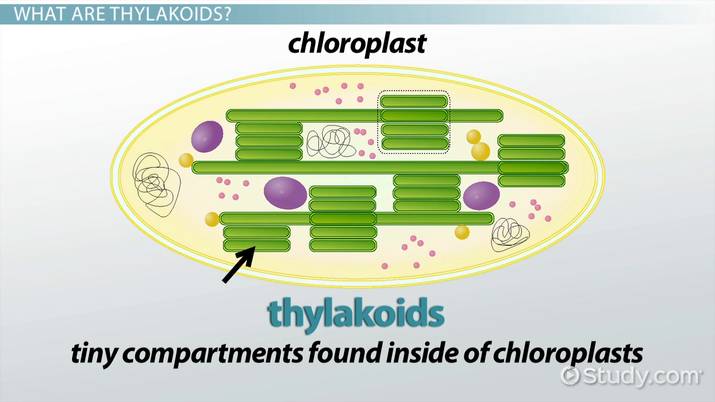 Try it now
Back
Coming up next: What are the Parts of a Plant Cell?

Thylakoids are tiny compartments found inside of chloroplasts. Their role is to help absorb sunlight in order for photosynthesis to occur. They contain all of the chlorophyll that the plant has which, in turn, allows for the absorption of sunlight. This is why the thylakoid is the site of the light dependent portion of photosynthesis, which is the portion that requires sunlight.

Thylakoids are bound by a membrane, as most organelles are. They are found inside of the chloroplast in stacks. (They can also be un-stacked, as in some algae.) The stacks of thylakoids are called granum, or grana for multiples. Outside of the thylakoids is stroma, which contains chloroplast DNA as well as some assorted ribosomes and enzymes.

The grana are connected by stromal thylakoids, which are basically structures that connect to the bottom of the thylakoid and resemble a tunnel. The membrane of the thylakoid divides the surrounding chloroplast into two spaces: the thylakoid space and the stroma. It also is the site of some of the important light gathering operations of the thylakoid.

The interaction between photosystem I and II is complex, but I will attempt to simplify it. Photosystem II absorbs light energy, exciting (energizing) an electron that takes off into the electron transport chain. It moves along the chain (similar to the one in respiration) and, as it does so, it gives off energy which is harnessed by the thylakoid as ATP (adenosine triphosphate, an energy molecule). It arrives at photosystem I and fills in a hole left by a departing electron that got excited as well. The second electron travels down a similar electron transport chain, except this time it ends as a different energy molecule, NADPH, to be used later.

This is a very condensed version of what occurs but, essentially, electrons are excited and give off energy, which starts a chain reaction of cascading electrons that get used later on.

In summary, thylakoids exist inside of the plant's chloroplasts. Stacks of thylakoids are called grana. Thylakoids are interconnected via stromal thylakoids. Thylakoids contain chlorophyll, the molecule essential for photosynthesis. In the thylakoid membrane, there are two photosystems (I and II). As light strikes photosystems I and II, excited electrons leave and give off energy to be used later on in photosynthesis. The energy created here is ATP and NADPH.

Immediately after completing this lesson would be an ideal time to:

Granum Concept, Function & Importance | What is a Granum?

Photosystem Overview & Characteristics | What is a Photosystem?

Protist Types & Characteristics | What is a Protist?

Grana in Biology: Overview, Function & Prevalence | What is Grana?