Tidal energy, which is produced as tides rise and fall in the ocean, is a source of renewable energy. Learn about tidal energy, and explore its advantages and disadvantages. Recognize that tidal energy can be a clean and predictable energy source, but it also can be costly. Updated: 09/19/2021
Create an account

Twice a day, every day since time began, the oceans experience a natural event that moves massive amounts of water in a pattern so reliable that it can be predicted months, even years, in advance. This natural event results in the rise and fall of ocean waters that we call the tides.

The tides occur because the earth and the moon are attracted to each other through the pull of gravity. The gravitational pull of the moon causes the ocean to bulge out toward the moon, pulling it to its highest level, or high tide. The earth is also pulled toward the moon, but with less strength. This pulls the earth away from the water on the far side of the earth, so high tide occurs on both sides of the planet at the same time, as shown here. Because the earth rotates, we experience two tides per day.

In this lesson, you will learn how the power of this massive movement of water is harnessed and converted into useful energy, such as electricity. We will also look at the pros and cons of this natural energy source. 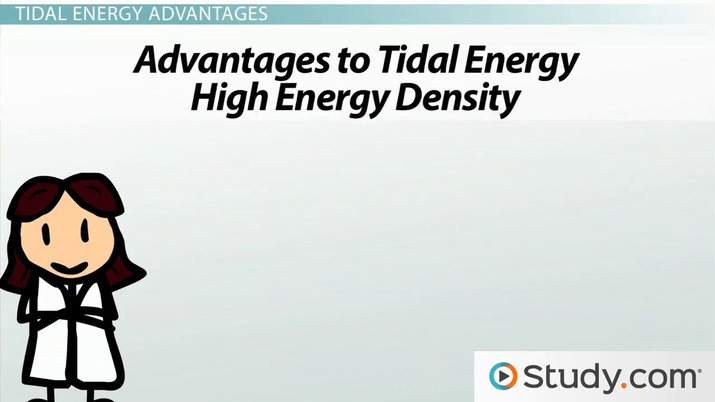 Coming up next: Energy Conservation and Energy Efficiency: Examples and Differences

Tidal energy, also referred to as tidal power, is the energy obtained from the rise and fall of tides. As the tides rise and fall, a massive amount of water moves toward and then away from shore. Turbines placed in the path of this moving water spin as the water passes by. These spinning turbines are connected to generators that create electricity.

One way tidal energy is captured is with the use of tidal turbines. Tidal turbines look like and work like underwater windmills. They utilize turbines with short but strong blades that spin as the tides move and then transmit their energy to an electricity generator.

Another way tidal energy is captured is with the use of tidal barrages. Tidal barrages are special dams that take advantage of the difference in height between low and high tides. Tidal barrages are built across an estuary or bay. When the tide comes in and the sea level rises, water passes through the dam and becomes trapped in a basin. When the tide goes out, gates within the dam release the water, allowing it to flow through turbines that spin and transfer energy to electric generators.

There are a number of advantages to tidal energy. Because the force behind tidal energy comes from the pull of the moon, it is an inexhaustible energy source. As long as the moon continues to orbit the earth, there will be energy in the tides.

This relationship to the moon also makes tidal energy a predictable energy source. Other forms of renewable energy, such as wind and solar energy, are dependent on random weather patterns. But tidal energy is based on the rise and fall of tides, which is more uniform and reliable.

It is a clean energy source because, unlike the burning of fossil fuels, it does not release greenhouse gases or other pollutants into the air. It is also a cheap energy source. After the initial investment is paid off, the cost of generating electricity is very low. Tidal energy has a high energy density, meaning that the tides store a larger amount of energy than most other forms of renewable energy, such as the wind.

Despite this list of advantages, there are a number of disadvantages to tidal energy. Tidal energy development is hampered by high upfront costs. For example, one study noted that ocean power generation can cost more than $400 per MWH compared to other renewable energy sources, such as wind, biomass, hydroelectric and geothermal energy, that cost about $150 per MWH.

There are also limited suitable locations for tidal energy. A suitable location must have sizable tides to justify the cost of constructing a power plant. Environmentalists are concerned that tidal energy can be detrimental to marine life. Power plants can disrupt the movements and migration of fish and other marine life in the oceans. Fish can also be killed by the turbines.

Tidal energy can only be captured during the tides, so it is an intermittent energy source. Because tides occur two times a day, in order for tidal energy to reach its full potential, it must be paired with an efficient energy storage system.

Like many renewable energy sources, tidal energy is difficult to transport. Tidal energy is cumbersome to transport and plants are often located far from the communities that will be consuming the energy. And tidal energy is vulnerable to severe weather. Hurricanes and typhoons are powerful storms that could damage or destroy equipment.

The natural rise and fall of ocean waters, known as the tides, allows for the movement of massive amounts of water. The energy obtained from the rise and fall of tides is called tidal energy, and we can harness this energy to create electricity. Two ways we harness the energy of the tides are with tidal turbines, which look like and work like underwater windmills, and tidal barrages, which are special dams that take advantage of the difference in height between low and high tides. Each of these methods use turbines that spin when placed in the path of the moving water. These turbines transfer their energy to electricity generators.

The disadvantages to tidal energy include the fact that there are high upfront costs associated with construction. There are also limited suitable locations for tidal energy. Environmentalists are concerned that tidal energy can be detrimental to marine life and hamper their movements. Tidal energy can only be captured during the tides so it is an intermittent energy source. Also, it is difficult to transport the energy to consumers and tidal energy is vulnerable to severe weather.

How to Construct Graphs from Data

What is Energy? | The Study of Energy