According to Tittle's control balance theory, a person's environment can influence their behavior. Explore the implications of this theory, which expresses the importance of finding balance, lest an individual be susceptible to control deficits or surpluses. Updated: 01/11/2022
Create an account

Almost every bank in the country has security cameras that capture every transaction throughout the business day. These cameras serve to protect the interests of the bank, as well as the customer. Bank tellers deal with hundreds of thousands of dollars on a daily basis. Usually, that money finds its way to the vault at the end of the day. But sometimes, the money ends up in the pocket of the teller.

What is it that makes the teller put the money in his pocket? At the same time, what made the rest of the bank tellers leave the money alone? Charles Tittle, a professor at North Carolina State University, offers an explanation called the control balance theory. Introduced in 1995 in his book Control Balance, Tittle's theory is based around control, and discusses how much a person's surroundings control their behavior, as well as how a person is able to overcome these controls and have control over others.

In the example of the bank teller who pocketed some money, this teller exercised control over his surroundings. However, the teller managed to pocket the money, he escaped the controls of the video surveillance and those who might be watching him. The remainder of the tellers who didn't steal were controlled by their surroundings. 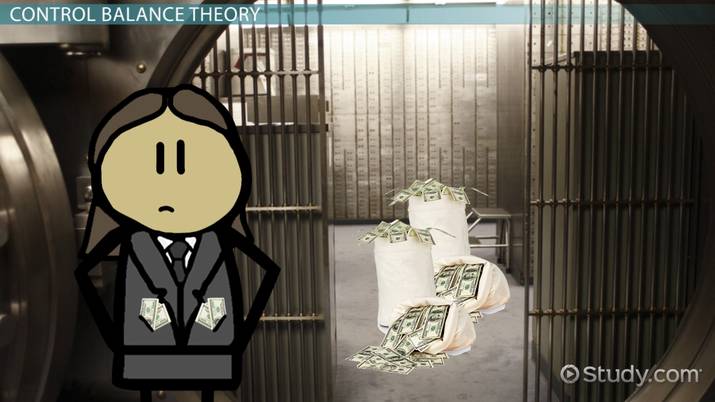 Coming up next: How Policy is Shaped by Developmental Theories

Deviance, or bad behavior, occurs in two situations according to control balance theory. One of these situations is when a person is more controlled than controlling. In the example of the bank teller, many controls were in place to keep crime from occurring. However, the teller in the example chose to escape these controls and committed the crime of theft. It's human nature to want to be in control. Not everyone who is in a controlled environment will commit a crime, but for some it's a way to be more autonomous, or free from control.

Another situation where deviance can occur is when a person is more controlling than controlled. In this situation, the person has more control than the securities around her. Take for instance a stock trader who works alone in an office. The trader is in a position of trust and there are no cameras or other monitoring systems in place. Clients who give her their money trust that she will invest it wisely and appropriately. This person has more control than the bank teller who is under a watchful eye. The trader could easily put money into an account that she owns instead of her clients.

When deviance occurs in either of the two situations described, there is an imbalance. The control balance theory suggests that there are two kinds of imbalances. The first are control deficits. Here, there is an excess of control by the individual, more so than that to which they are subjected by external forces. A control deficit occurs when a person's freedoms are repressed, or held back, and the person becomes deviant as a way to break free from these controls. Usually where there's a deficit, the resulting criminal behavior is likened to a street crime such as property theft or vandalism.

The second imbalance occurs when there are control surpluses. Here, there's much less control surrounding the individual, who then has greater control over their surroundings. When a control surplus exists, a person is more in control than their environment. Usually where there's a surplus the criminal behavior is more complex, such as a white-collar crime like money laundering or fraud.

People want to be in control of their own lives and destinies. Not everyone who wants control will be deviant and commit a crime. This is just one theory among many as to why people commit criminal acts.

Tittle's control balance theory has been praised by many who appreciate that the theory explains deviance, not just criminal behavior. However, his theory isn't without criticism. There are many moving parts to the theory and there are a number of factors to consider when explaining or defining deviance. Therefore, the theory is hard to test for accuracy.

Charles Tittle's control balance theory is based upon the premise of control. In varying degrees, people are controlled by their surroundings, and each of us has the ability to break free from these controls and exert control over others. Deviance can occur when a person breaks free from controls and exercises control over another. When a person is more controlled than controlling, they will be in a situation where their behavior is monitored or watched. Deviance may occur in this context if the individual chooses to be free from their controls and commits a crime.

Deviance also might occur when a person is more controlling than controlled. In this instance, a person has more freedoms and fewer restrictions. This person has the ability to control their behavior but chooses deviance because of the lack of controls.