Tobacco mosaic virus is commonly found in tobacco plants, appearing in a 'mosaic' of discoloration patches. Learn the structure and function of this virus, including its effects on agriculture. Updated: 12/13/2021
Create an account

When you hear the word virus, what comes to mind? Sniffles and a sore throat? Or, maybe you think of a different kind of virus that can erase files and wreak havoc on your computer. But did you know that humans and computers aren't the only ones who have to worry about viruses? Believe it or not, plants can get viral infections just like people can, and they cause a great deal more trouble than a case of the sniffles. Continue on to learn more about the first virus, which was discovered more than 100 years ago.

Tobacco mosaic virus received its name because the plants that it infects often show patchy discoloration, giving them a mosaic-like appearance. This viral villain is bad news for your green plant friends. If you haven't guessed by its name, it obviously infects tobacco plants, but it can infect many other plant species as well. 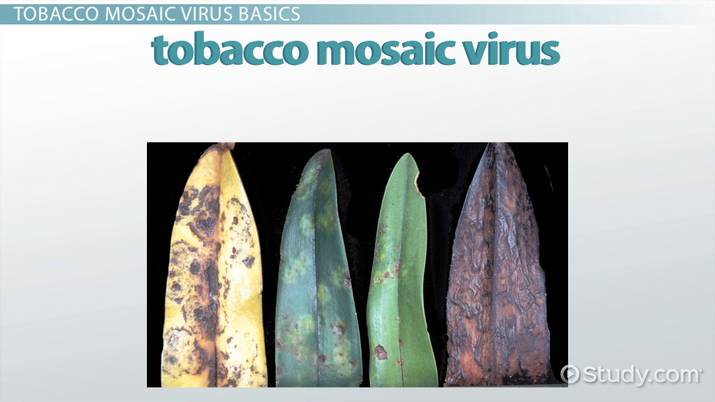 Coming up next: Variola Virus: Structure and Function

The structure of tobacco mosaic virus is impossible to see with the human eye because it is very small - approximately 300 nanometers long. This means that 3,000 tiny viruses would fit in a single millimeter.

The second thing all viruses need is a capsid, or a container to hold and protect their genome. Tobacco mosaic virus has a helical-shaped capsid made of more than 2,000 copies of a particular protein. Imagine 2,000 beads on a string that loops around and around like a tight spiral staircase. The tube-like structure that is formed is similar to tobacco mosaic virus' helical capsid.

So, in a nutshell (which is actually quite like a capsid!) the structure of tobacco mosaic virus is an RNA genome inside a helical capsid.

A virus has a simple life cycle: Replicate. Spread. Repeat.

All viruses need a host to replicate, so successful spreading means infecting a new host. Only then can the cycle repeat itself.

Tobacco mosaic virus can spread by direct plant-to-plant contact where it enters through tiny holes in the plant. If a plant is injured, this makes it even easier for the virus to get inside. It's just like when you have an open wound - you need to keep it clean and covered up because the open sore makes you more susceptible to infections.

The virus can also be carried from plant to plant by a carrier organism. Imagine a tiny insect walking on an infected plant and then walking on a neighboring healthy plant. Those tiny feet could easily track some viral particles on the new plant (and some insects have lots of feet). Additionally, seeds can also become contaminated, creating new plants that are already infected with tobacco mosaic virus.

Tobacco mosaic virus can have a negative effect on the agriculture industry. Depending on the species of plant that it infects, it can cause stunted growth and poor health, eventually leading to death. This persistent virus has been known to live for half a century in dried, dead pieces of plant - so once it shows up, it isn't easy to get rid of. Just like humans trying to prevent the spread of the cold or flu, farmers and others who handle plants must wash their hands and tools often to prevent spreading the virus.

Tobacco mosaic virus is a virus that infects plants, including tobacco. It has an RNA genome inside a helical capsid. It can be spread from plant to plant, passed along by a traveling insect or other carrier, or passed through contaminated seeds. It does not infect humans or animals, but it can cause problems for the agricultural industry. Good hygiene can prevent viral spread.