The word 'tool' has a connotation of something that aids us. Normally, we think of tools being something manipulated with our hands to help us build. In this lesson, we will learn about tools designed to promote cognitive development. Updated: 01/15/2020
Create an account

What is a Cognitive Tool?

When you hear the word tool, what do you think of? Most of us think of hammers, screwdrivers or saws. This lesson, however, will focus on cognitive tools. You have been introduced to and used cognitive tools throughout your education. Do you remember the mathematical order of operations by the phrase 'Please Excuse My Dear Aunt Sally?' What about 'Every Good Boy Does Fine'… does that ring any musical bells? These are examples of cognitive tools used to promote cognitive development.

Through tool use, humans have transformed nature, and the particular social organizations that result from tool use determine human life. The invention of agricultural tools and the discovery of electricity are examples of how technical tools have changed the lives of humans.

Cognitive tools may be manipulated like technical tools we often think about but are unique in that they can be concepts, symbols, strategies or any other culture-based mechanism that helps learners think and act more effectively. Some examples of these cognitive tools include mnemonic devices, algebraic symbols and works of art.

The famous psychologist Lev Vygotsky bridged the gap between tool use and cognitive development with his designation of cultural symbols as psychological tools. Included are language, numerical systems, mathematical symbols, maps, diagrams and so on. 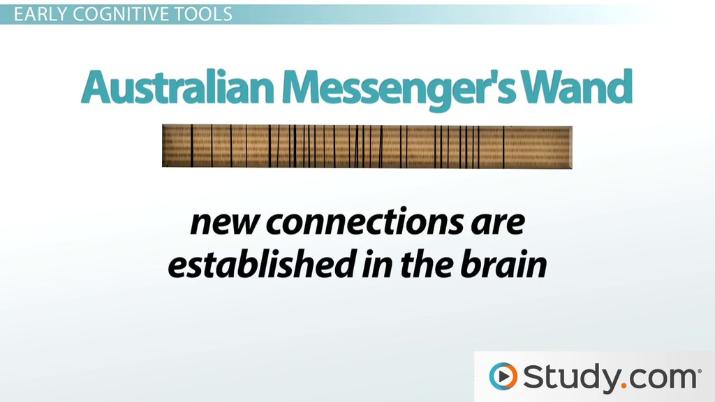 Coming up next: Differences between Piaget & Vygotsky's Cognitive Development Theories

Both the tools of work (technical tools) and psychological tools assist the individual in completing a task. Technical tools (such as hammers, nails and saws) are directed outward; they change an external situation. In contrast, psychological tools are directed inward; they direct the mind and change the process of thinking. Specifically, these tools allow learners to use basic mental functions (such as attention, perception, sensation and memory) more effectively and adaptively. Language and other psychological tools are artificial devices for mastering one's own mental processes; they are social in nature, meaning they are representative of the culture and society of the learner, and they're also the product of historical development.

The process of using cognitive tools began with memory. At some point in human development, primitive humans began to master and control their memory through artificial symbols that they created. An often-used example is the so-called messenger's wand found in Australia. They were large sticks of rectangular wooden slabs marked by a series of notches that the messengers used to deliver communications to distant tribes. However, the notches were not just arbitrary symbols. Instead, they represented certain persons and objects in addition to numbers and locations. With the aid of this simple device, the messenger reconstructed the message at the time of delivery.

The events associated with the use of these wands are that new connections are established in the brain through the act of perceiving the external reminders and returning to the ideas they represent, and the construction of the process of memorizing is accomplished by internally forcing an external object to remind the individual of something.

Use of Cognitive Tools

Vygotsky indicated that a cognitive tool must meet the following criteria: first, it's any sign or symbol that is used to master one's thinking. Second, it's transmitted through culture and interaction with a more capable other. And third, the tool must be essential to the development of higher psychological functions, including categorical perception, logical memory (memory based on connections and relations among concepts) and voluntary attention.

In addition to detailing criteria of cognitive tool use, Vygotksy also designated specific stages of sign use that children move through. These stages begin as basic or primitive in nature (in which the child does not know how to use a sign to aid their learning) through advanced use (in which the child internalizes the signs for more accurate recall, which makes learning more efficient). Let's discuss these in detail.

Cognitive Tool Use in the Classroom

Cognitive tools are commonly used by learners in the classroom in a variety of ways. One example is that students become better musicians by learning to read music notes and understand what keys, chords and phrases are. Another example is in chemistry. Chemistry students understand problems and chemicals more easily when they learn the symbols, such as H2O for water, NaCl for sodium, and Fe for Iron.

Writing is also an area where cognitive tools make a considerable difference in a learner's development of skills. Wikis, blogs and other online tools allow writers to be more creative in terms of both the content and the way they receive feedback from peers and teachers. Take a moment now and think about the cognitive tools you have utilized throughout your education.

In summary, cognitive tools are used to help learners think and act more effectively. Some common examples of these tools include symbols, mnemonic devices and concepts. The process of using cognitive tools began with the use of memory tools in primitive humans.

Vygotsky identified stages of cognitive sign use from basic to advanced where the natural or primitive state occurs as a child attempts to solve a problem through rote memorization (unsuccessfully), all the way through the use of internal sign use where the learner is able to conceptualize in their head the sign or tool to aid them in problem-solving and more effective learning.

The Role of Play in Cognitive Development

What are Cognitive, Social, and Emotional Development?