A principal may be held liable for wrongful actions, or torts, taken by an agent. Explore the concept of 'respondeat superior', examples where a principal is held liable, and some where they are not. Updated: 09/27/2021
Create an account

An agent works as an extension of the principal, just as if the principal was present and acting alone. Therefore, the principal can be held directly liable for the agent's torts, or wrongful acts giving rise to a civil cause of action.

A principal can be held liable when:

In each of these instances, the principal has acted negligently in his or her handling of the agent. Any tort that arises as a direct result of the principal's negligence will, therefore, be imputed directly to the principal.

For example, let's say Pete runs a plumbing company. He hires Andy as a plumber without conducting research on Andy's experience. As it turns out, Andy isn't a licensed plumber. Andy has a long criminal history and spent the last few years in and out of prison for burglary and theft.

As Andy visits Pete's clients, he steals from the homes rather than completing plumbing jobs. As the principal, Pete can be held directly liable for his clients' damages. This is because Pete failed to properly investigate Andy before hiring him and sent Andy into homes without any supervision. 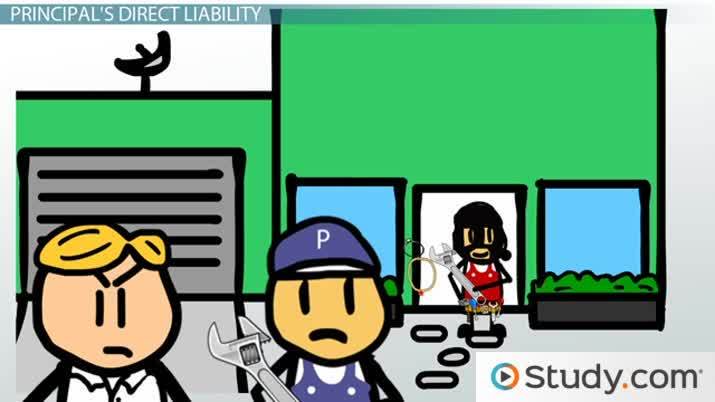 Principals can also be held indirectly responsible for an agent's torts through the doctrine of respondeat superior. This is a Latin term, meaning 'let the superior respond.' In practice, this doctrine allows a principal to be held liable for his or her agent's acts committed while in the scope of the agent's authority.

This means that, in general, the principal can only be held liable for the agent's acts when all four of these factors are met:

For example, let's say Pete's Plumbing hires Andy as a plumber. This time Andy is licensed, and Pete conducted the proper background checks. Andy is sent to fix a gas leak in a client's home but accidentally fixes the wrong line. The house later explodes. Pete is indirectly liable under the doctrine of respondeat superior because all four factors are met.

No Liability for Principal

L.M. and her family sued former pastor Ali Pacheco, the church he worked for, the district council for that church and the general council for that church. They accused Pacheco of sexually assaulting L.M. while she was a minor. While the district and general councils settled with L.M. and her family, the church and Pacheco proceeded as defendants to a jury trial.

Trial evidence showed that Pacheco engaged in acts of grooming L.M., both by privately visiting her at her home and school and by sending her gifts. Pacheco then picked her up from work one day and took her to a hotel room where he assaulted her. Pacheco defended his actions by alleging that the acts were consensual.

Several witnesses testified that it was the district's responsibility, not the church's, to screen and hire pastors. The record also showed that there were no viable warning signs to indicate Pacheco might commit the act. Therefore, the church wasn't liable for negligent supervision.

The appellate court pointed out that an employer can't be held liable for an employee's torts or crimes using respondeat superior, unless the acts were committed during the course of the employment and to further a purpose or interest, however excessive or misguided, of the employer.

The sexual assault occurred on Pacheco's own time away from the church and in direct opposition to church policies. The appellate court found that the assault was committed in order to further Pacheco's own interests, rather than those of the church. Therefore, respondeat superior could not apply.

A principal can be held directly liable for an agent's torts when:

A principal can be held indirectly responsible using respondeat superior. This legal doctrine allows a principal to be held liable for an agent's acts committed while in the scope of the agent's authority. The courts use a four-pronged test to determine whether or not an agent acted within the scope of the agent's authority. The principal can only be held liable when all four of these factors are met:

When this lesson has been completed, you could have the ability to:

Horizontal and Vertical Agreements that Violate the Sherman Act

Seller's Right to Cure Under the Uniform Commercial Code

Contractual Liability of an Agent

Fiduciary Duties of an Agent

Duties and Responsibilities of a Principal

Warranties Under the Uniform Commercial Code