We previously learned that an increase in the amount of resistance in the arteries leaving the heart, called an increased afterload, can make it harder for the ventricles to pump blood out of the heart. However, this difficulty pushing against pressure is not only seen at the heart; it's a pattern we see throughout the circulatory system. Any time there is high resistance in a blood vessel, it will be difficult for the blood to flow through that vessel. In this lesson, you will learn about factors that regulate blood flow through the circulatory system. 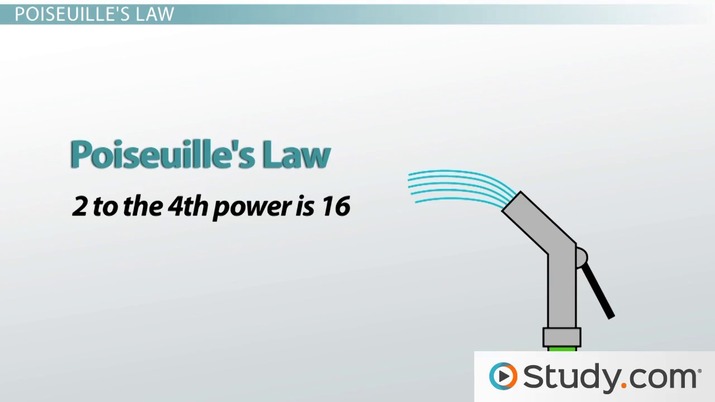 Blood flow is the continuous movement of blood through the circulatory system. As blood moves through your body, it encounters resistance to its flow. There are a number of factors that influence blood flow. These factors include the thickness, or viscosity, of your blood and the length of a blood vessel. In other words, if the blood is thicker - more like molasses than it would be like water - there's more resistance to flow. Also, if a blood vessel is longer, it will be harder for blood to pass through that vessel, and there will be more resistance to blood flow. Another factor is the difference in pressure at the beginning and end of the vessel. This pressure difference is important, because later, we will see that blood flows from high to low pressure. However, one of the most important factors influencing blood flow is the size or radius of the blood vessel the blood is passing through.

Blood vessels - and in particular, the more muscular arteries - are often the source of resistance. One way an artery can actively resist blood flow is by contracting the smooth muscle in its wall, causing the artery to constrict. When an artery constricts, we call it vasoconstriction. This is an easy term to recall if you remember that 'vaso' refers to 'blood vessel.' During vasoconstriction, the artery gets smaller and offers increased resistance. This causes a decreased blood flow through its lumen, or hollow center. If, on the other hand, the smooth muscle in the wall of the artery relaxes, the blood vessel moves into a state of vasodilation, and its lumen dilates, or gets bigger. This offers decreased resistance and causes an increased blood flow. This is much like a nozzle at the end of a hose. If the nozzle is almost closed, it will allow less water to get through. If the nozzle is opened wide, it will allow more water to flow through.

We mentioned earlier that one of the most important factors influencing blood flow is the size, or radius, of the blood vessel. You recall that radius is a math term that measures the distance from the center of a circle out to its edge. We explain the size-flow relationship through a law, and that law states that blood flow is proportional to the fourth power of the vessel's internal radius. This is known as Poiseuille's Law, which can be pronounced like the words 'pause' and 'wee' put together. It's an equation that is used to determine the flow of any fluid through any tube, so you might want to use its pronunciation to help you remember what the law talks about. For example, if the blood vessel has a small radius, the blood flow will be small, or we might want to think of it as it will 'pause' from its normal flow. If the blood vessel's radius is big, then blood flow will be big, and we say 'wee' when we open the flood gates.

In simple terms, what Poiseuille's Law tells us is that if the radius of a blood vessel doubles, like it can with vasodilation, then the flow will increase 16 fold, because 2^4 = 16. The same would be true of a hose nozzle. If you take a hose nozzle and open it twice as big, you could expect the water flow to increase 16 fold. The reverse is also true, if the radius of the vessel is reduced in half by vasoconstriction, then the blood flow would reduce by 16 fold. The takeaway learning point here is that it only takes a small change in the size of the artery to give a big change in blood flow.

We previously learned that arterioles have a smaller diameter than arteries. This smaller size provides greater resistance to blood flow than the larger arteries, just like a smaller hose nozzle does. Arterioles also have relatively more smooth muscle in their walls, which allows them to constrict and dilate more efficiently. Therefore, we see that the small arterioles are able to provide a significant amount of control over the flow of blood. Blood flow to individual organs, or throughout the entire circulatory system, can be regulated by changing the diameter of the arterioles. Vasodilation of the arterioles decreases resistance and increases blood flow. Vasoconstriction of the arterioles increases resistance and decreases blood flow.

Blood vessels - and in particular, the more muscular arteries - are often the source of resistance. When an artery is in a state of vasoconstriction, the lumen of the artery gets smaller and blood flow decreases. When the artery is in a state of vasodilation, the lumen of the artery gets bigger and blood flow increases. We use a law known as Poiseuille's Law to calculate blood flow through an artery. The law states that blood flow is proportional to the fourth power of the vessel's internal radius. Therefore, if a blood vessel's radius doubles in size due to vasodilation, the blood flow through the vessel will increase 16 fold.

Blood flow can be regulated to individual organs, or it can be considered in total. Total peripheral resistance is defined as the total resistance to flow of blood in the systemic circulation. The arterioles are important regulators of blood flow because of their smaller size and muscular walls.

After watching this lesson, you'll be able to:

Dehydration & Other Concerns of Water Intake in the Body

What Is Perfusion? - Definition & Treatment

The Venturi Effect and Blood Flow