Trace evidence is something small like hair, fiber, soil, or fingerprints that is transferred from one person to someone else or to a place. Explore the definition, analysis, and examples of trace evidence. Updated: 11/20/2021
Create an account

A man runs through a dark, cold forest in the middle of the night. His heart is pounding. He's sweating. In his mind, he sees flashes of his victim, lying on the ground. No one saw him. No one knows what he did. He didn't leave anything for the police to find. He's gotten away with it . . . Or has he?

The word 'trace' means small or minute. To a forensic scientist, trace evidence refers to evidence that is transferred from one person to another person or place. In the forensic world, this concept is known as Locard's Exchange Principle. The man running through the woods may have taken precautions not to be seen by anyone, but there are several different kinds of trace evidence that can be collected from a crime scene that could lead to his arrest.

Let's look at how some of these evidence types could be used by forensic examiners to catch the criminal running through the woods in our example. 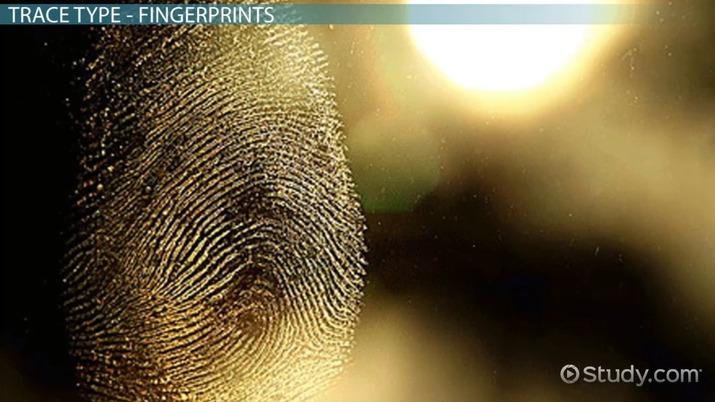 Coming up next: What is a Conviction? - Definition & Meaning

If a hair or hairs are found at a crime scene, there are several different characteristics forensic scientists can examine to determine information about the person the hair belongs to. For example, the center of a hair shaft is called the medulla. Forensic scientists can examine a piece of hair and identify the type of medulla in the shaft. The medulla can be continuous, interrupted, fragmented, solid, or it can not show up at all. The examiner can then compare the hair to known samples, taken from victims or suspects.

Forensic Scientists can also examine hair for different characteristics to determine what part of the body it came from. For example, they can determine if a hair came from someone's head or from a different part of the body, like a beard. The examination of hair can also determine if it came from an animal or a human. If a hair is forcibly removed, yanked or pulled out, the entire hair follicle may be present. The follicle may have blood and tissue attached to it, which could be examined for possible DNA evidence. So while the criminal in our story is sure no one saw him, is he sure that none of his hair was transferred to the victim?

A fiber is the smallest part of a textile or cloth. Forensic examiners can collect fibers from a crime scene, a victim, or a suspect. Fibers have special characteristics that can tell an examiner the type of fabric the fiber came from. When forensic examiners collect fibers, they will try to answer several questions. First, they will try to determine the type of fiber. What is the fiber made of? Is it a natural fiber, like cotton? Or is it a synthetic, or man-made, fiber like polyester? Next, they will look at the color of the fiber. Some colors can be very specific, and examiners can actually tell the type of dye used on a particular fiber. If larger samples are present at a crime scene or on a victim, forensic examiners can also examine characteristics of these larger pieces of evidence. For example, if the victim in our story tore a piece of the man's shirt during the struggle, the weave of that scrap could be compared to the weave of the suspect's torn shirt.

When forensic examiners examine soil, they're looking at more than just dirt. Soil, the top layer of the earth's crust, is formed by a complex process that involves several different factors: temperature, chemicals, and minerals in the ground; the amount of rainfall received; etc. Examining the unique characteristics in soil that is found on a suspect's shoe or clothing can help forensic examiners determine a general region or location where that person has been. For example, if silt, a specific soil type, is found on a suspect's shoes, the examiner can determine that those shoes have been in the sediment of a riverbed. What is being transferred onto our criminal's shoes as he runs through the forest?

Fingerprints are made when a person touches a surface and leaves residue, including oils and salts, on that surface. There are three different types of fingerprints.

While each fingerprint is unique because of all the small details contained in that print, fingerprints all fall into three general patterns.

If a fingerprint is found at a crime scene, that fingerprint can then be examined and compared to a known fingerprint exemplar, inked or scanned fingerprints taken from the hand of a suspect. Did our criminal in the forest wear gloves? If not, who knows what he touched and how many of his fingerprints may be found.

There are several different categories of evidence that fall under the trace evidence umbrella. But all trace evidence is small or minute. Forensic examiners base their search for trace evidence on Locard's Exchange Principle. No matter how careful a criminal is, if contact is made with the crime scene or the victim, some form of trace evidence will be left behind. Trace evidence can include hair, fibers, fingerprints, and soil, among others.