All countries desire trade as a way of increasing their wealth, but very often they want it on their own terms. This lesson looks at the trade barriers that many countries establish, as well as the effects of such limitations.
Create an account

As long as communities have had contact with their neighbors, there has been trade. From time to time, rulers saw fit to create trade barriers in order to prevent goods from one country from being sold or bought by those of another. After all, it is generally not wise to sell weapons to a country you are at war with. However, the rise of the global trade routes we think of today really came with the growth of the European trading empires of the 16th and 17th centuries. Because of trade, countries like France, England, Holland, and Spain had emerged from being relative backwaters to being legitimate global powers.

Needless to say, they knew that they owed their success to their ability to carry on trade. As such, they limited other powers' access to their ports and colonies. This was part of a greater practice known as mercantilism, which sought to use such barriers to prevent other countries from growing rich. Mercantilism may have gone away, but it's still an example of a common barrier to trade today known as protectionism. Protectionism seeks to protect businesses at home through trade barriers. While few modern trade barriers are extreme as mercantilism, many do seek to either limit access to markets or artificially adjust prices. 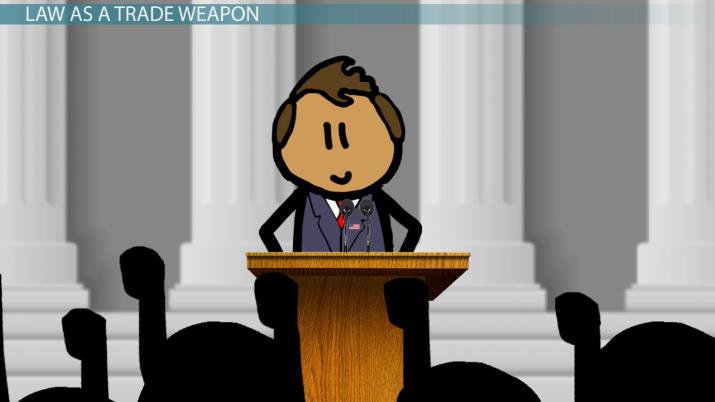 Coming up next: Types of Taxes & the US Tax Code: Impact on Microeconomics

Law as a Trade Weapon

Many of those trade barriers are passed as laws. After all, keeping people's jobs and keeping businesses profitable tends to make sure that politicians have an easier time staying in office. One of the most obvious ways that politicians can pass such laws is to limit access to the domestic market. After all, you can't very well sell your goods if you can't get them there.

Governments can limit access to a market by making it mandatory for importers to have a license, or permission from the government to sell goods. While some countries make the paperwork to get a license fairly straightforward, others make it a real ordeal, requiring months of waiting and hefty fees from lawyers. Licenses work both ways, however. Some exporters require a license to sell their goods outside of the country, especially if it is something in high demand, like gems.

Once a company gets a license to import goods to a country, their work still isn't over. They must then be sure to adhere to any quotas. Quotas are a limit on the amount of goods that an importer can bring into a country. Supply graph models tell us that, as supply increases, the price per unit will decrease. This could hurt the producers that the country is trying to protect, so they limit the total amount of shock to the system through quotas.

Sometimes trade barriers have a much more easily measured cost. These come in two different varieties. Let's say that you are importing cars to the United States, a country that definitely works to protect its automobile industry. You would be required to get a license, as well as have quotas. However, you would also have to pay a tariff, or tax per car imported. Needless to say, you'd be forced to pass this cost on to your customers in the United States, such that the price per car rises to a level comparable to those produced domestically. This is part of the reason that so many foreign cars are now produced in the U.S.

However, what about your competition? After all, chances are that they are significant donors to their local politicians' election campaigns. Therefore, countries often also have subsidies, or amounts of money paid directly to domestic producers to make them more competitive with foreign imports. As you can imagine, American car producers receive significant subsidies, but they're not alone. In fact, even wheat producers receive large payments to make their grain more competitive with imported foods. Also, subsidies can be a way for governments to reimburse domestic producers for losses incurred by foreign governments enforcing tariffs.

One other option exists as a trade barrier, and it's rather extreme. If a country decides that it is not to its advantage to trade with another nation, it can place that country under embargo. An embargo is a ban on trading. Embargoes can be either specific to one good, such as the American ban on British beef as a result of mad cow disease, or much broader, like the embargo on drugs. However, embargoes do have a downside. Smuggling is a particularly ancient form of trading that seeks to avoid any form of government regulation. While we may think of arms dealers or drug traffickers as the quintessential smugglers, the truth is that many goods have been smuggled at some point.

What Does It All Do?

As you can see, trade barriers act in one of two ways. They either limit the initial supply of a good through limits such as quotas or licenses, or they raise the price of the good in question through tariffs. Both of these techniques have the same final effect on supply and demand. By limiting supply, prices are raised. Likewise, by raising the cost of protection, that cost is passed on to the final consumer through higher prices, resulting in decreased demand. Because these two often act in concert, the final result is higher prices for the consumer and lower quantities sold for the producer.

So, why would anyone want to do it? In short, protectionism. Supporters of trade barriers reason that it is ineffective to lower prices for consumers if a number of them would be unemployed due to a lack of demand for domestically produced goods. For this reason, just about every country uses trade barriers, even if they often claim to support free trade.

In this lesson, we looked at trade barriers. Starting with mercantilism, the practice through which European powers tried to limit access to ports and colonies only to ships of a certain nationality, we then moved on to non-monetary ways that countries erect trade barriers today. These include requiring licenses, as well as establishing quotas.

Further, we looked at the role that tariffs and subsides play in providing monetary controls on foreign trade. We discussed how embargoes can be either specific or total, and how smugglers work to get around trade barriers. Finally, we asked why we have trade barriers, and saw that they are politically motivated and surprisingly common throughout the world.

The lesson has ended, and you now have the knowledge to:

Investment in Human Capital and Productivity

What is a Quota? - Definition & Example

What is Discrimination at the Workplace? - Forms, Policies & Practices

Gains From Trade and the Benefit of Specialization

Tariffs and Quotas: Effects on Imported Goods and Domestic Prices