Central and South American economies are characterized by different levels of involvement with the supply and demand of a market-based economy and the regulations of a government-controlled market. Compare and contrast the details of market, command, mixed, and traditional economies in several Central and South American countries. Updated: 11/08/2021
Create an account

Growing up, my family owned a grocery store. Since my parents' names were on all the bills, they made most of the decisions. They decided what to buy and what to sell. For the most part, they also got to decide the prices of things like bananas, cereal, and coffee. They made the call on how many packs of hamburgers to grind or how many pounds of deli salads to make. Interestingly, not all business people around the world get to make the same decisions. As a case study of sorts, let's take a look at the traditional, command, and market economies of Central and South America.

Since most of us are familiar with a market economy, we'll start here. Stated very simply, a market economy is one in which economic decisions, such as pricing and what to produce, are based on supply and demand. In a market economy, the government does not step in and tell producers what needs to be made, nor does it walk around carrying a big pricing gun. Instead, prices and production ebb and flow as the people decide what they want to see on the store shelves and how much they are willing to pay for it. With this in mind, it's important to note that market economies are driven by profit. The more producers and sellers can get for a product, the more they will take.

When speaking of Central and South America, Colombia and Peru are great examples of market economies. With both of them trying to capitalize on their natural resources, Colombia lets supply and demand dictate the prices for the oil and coal it sells. Likewise, Peru depends on the market when exporting its gold and copper. 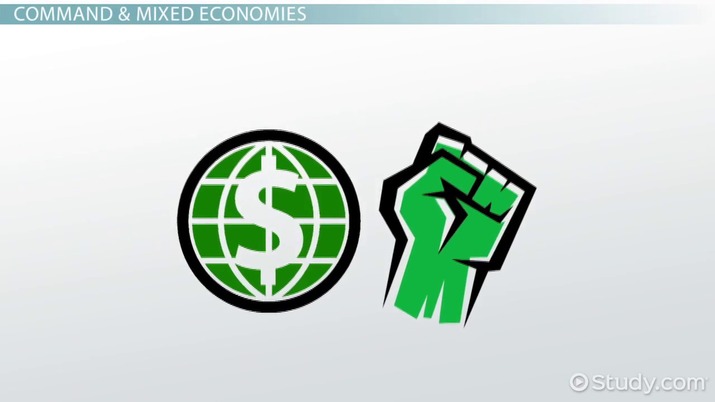 Try it now
Back
Coming up next: Cultural Patterns of the Caribbean, Central & South America

When speaking of command economies, communism is usually the first system to be mentioned. Again, stated very simply, communism is a system of governance in which all property, resources, and productions are publicly or state owned. In other words, like a puppet master, the government pulls the economy's strings, commanding the decisions of what gets made, who makes what, who gets what, and who gets paid for what.

When discussing command economies of Central and South America, we have to look a bit into the past. During the latter half of the 20th century, countries like Nicaragua were under the yoke of the command economy. However, today most of the economies in the Western Hemisphere have become a mixture. They are not completely command, but they aren't freely market. Economists aptly choose to call these economies mixed economies, or economies that have characteristics of both market and command economies.

When speaking of South America, Brazil is a great example of an economy that is not quite command but not quite market. To explain, the supply and the demand of Brazil's market decides what to produce. If the market screams for more bananas, more bananas are produced. However, the government of Brazil has the authority to step in and say who gets to produce the bananas. Sometimes, it's the best farmer for the job. Other times, it's the guy who happens to be a government official's brother. Either way, the government plays a big part in the process of production and pricing.

Brazil is not the only country with this type of mixed economy. It's also seen in countries like Argentina, Nicaragua, and El Salvador.

Although very rare in our modern world, some parts of Central America and South America still give us a glimpse of traditional economies. For instance, there are still some tribes of Mayan ancestry who practice a traditional economy. Found in the highlands of countries like Guatemala and Belize, these people groups produce for the survival of their families, not profit or because the government demands it.

A market economy is one in which economic decisions, such as pricing and what to produce, are based on supply and demand. It is the buying habits of the people that govern what goods are produced and the prices of these goods. Market economies are driven by profit. Market economies are found in countries like Colombia, Peru, Chile, and Costa Rica.

A traditional economy is one in which traditions, customs, and beliefs shape production. For example, goods aren't made to sell; they are made to be part of family life or worship. They are made for survival, not profit. Traditional economies are very rare in the modern world. However, they can still be found in the tribes of the highlands of both Central and South America.

Now that you've watched and reviewed the lesson, you're able to:

Geopolitics: Foundations & Examples | What are Geopolitics?