View bio
Traditional poems are a form of poetry characterized by adherence to a specific verse structure such as rhyme schemes or patterns in meter. See examples of traditional poems, and notice their distinction from contemporary works that deviate from the structural 'path'. Updated: 10/21/2021
Create an account

Some of us have been to so many weddings that we could probably tell you at any point what song a couple has chosen next or how much more of the ceremony is left. We might have this ability because many weddings in our culture are very traditionally structured and don't vary much in their format from one set of nuptials to the next.

Within free verse, contemporary poets tend to use language that is easily accessible to general readers, whereas traditional poems often feature language reserved for a more educated audience. Contemporary poems are also rather brief compared to more traditional works of poetry, which can sometimes extend for many hundreds of lines.

The structures and characteristics of some traditional poems like haikus (three-line poem containing 17 syllables) are relatively simple. However, many types of traditional poems follow strict formulas of rhyme, meter, and other features that take a considerable amount of effort to master.

Most modern poets, then, have abandoned these traditional patterns to permit themselves more freedom in the expression of their ideas through verse, as well as in some cases to demonstrate social and literary progress. Though not many of them are written anymore, traditional poems can still easily be found, and you might even recognize some of the ones in this lesson! 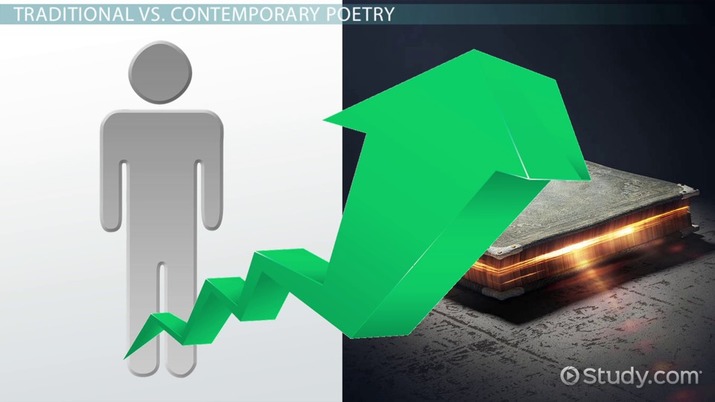 Coming up next: A Rose for Emily Lesson Plan

You're probably familiar with the Shakespearean sonnet, but there are other forms of this type of traditional poem, as well. Created by Edmund Spenser in 1594, the Spenserian sonnet contains 14 lines of iambic pentameter and discusses subjects of love, just as all other sonnets do. The primary difference between Spenser's sonnets and others, say those of Shakespeare, is the rhyme scheme he used: abab bcbc cdcd ee.

Because of the interlocking of rhyme elements between the three quatrains (stanzas of four lines), these poems are also known as 'linking' sonnets. See if you can catch the linking effect in 'Sonnet No. 41' from Spenser's Amoretti:

To be so cruel to an humbled foe? (b)

If nature, then she may it mend with skill, (a)

If will, then she at will may will forgo. (b)

But if her nature and her will be so, (b)

that she will plague the man that loves her most: (c)

Then all her nature's goodly gifts are lost. (c)

Is but a bait such wretches to beguile: (d)

As being long in her love's tempest tossed, (c)

She means at last to make her piteous spoil. (d)

Of fairest fair let never it be named, (e)

That so fair beauty was so foully shamed. (e)'

When it comes to metrical patterns used in traditional poetry, iambic pentameter is by far the favored meter in English verse - perhaps by no one more so than by Shakespeare. Of course, he had to use this meter to follow proper sonnet format, but it is also a defining feature of his plays.

The comedies, tragedies, and histories of Shakespearean drama are all predominantly composed in blank verse, which identifies unrhymed lines of iambic pentameter. Writing drama in verse is traditional, but we can also see how some of the language in Hamlet's soliloquy from the play Hamlet might be difficult if you don't have a dictionary handy:

No more--and by a sleep to say we end

The heartache, and the thousand natural shocks

That flesh is heir to. 'Tis a consummation

Devoutly to be wished. To die, to sleep--

To sleep--perchance to dream: ay, there's the rub,

For in that sleep of death what dreams may come

When we have shuffled off this mortal coil,

Must give us pause. There's the respect

That makes calamity of so long life.'

Of all the types of traditional poems we've seen here or that you ever encounter, one of the most complicated is certainly the sestina. On the surface, these poems seem fairly straightforward: they're comprised of six stanzas in any meter, each containing six lines, followed by a three-line envoi. An envoi is a final stanza, typically shorter than the rest.

However, instead of employing a normal rhyme scheme, sestinas use a complex system of repeating words at the ends of lines throughout the poem. Take a look at this excerpt from Ezra Pound's 'Sestina: Altaforte' to see if you can spot the repeated end-words and discern what effect using these words again and again in different contexts might have:

'Damn it all! all this our South stinks peace.

I have no life save when the swords clash.

But ah! when I see the standards gold, vair, purple, opposing

And the broad fields beneath them turn crimson,

Then howl I my heart nigh mad with rejoicing.

In hot summer have I great rejoicing

When the tempests kill the earth's foul peace,

And the lightnings from black heav'n flash crimson,

And the fierce thunders roar me their music

And the winds shriek through the clouds mad, opposing,

And through all the riven skies God's swords clash.'

As you probably noticed, the repeating words of this sestina are peace, music, clash, opposing, crimson, and rejoicing.

The well-defined structure of a traditional poem can range from the relatively simple, such as a haiku, to the intricately complex, such as a sestina. Traditional poetry can rely on literary and linguistic conventions to shape its characteristics, such as blank verse's use of iambic pentameter - the most prevalent poetic meter in the English language.

Some traditional poems, such as the Spenserian sonnet, even depend on tweaking existing features of a particular form to fit a poet's unique style. Although writers of traditional poems can find a bit of freedom in such variations, most contemporary poets still find any sort of definite formatting to be too confining.

After this lesson, you should easily be able to:

1. Do some additional reading about poetic meter to find out what the terms used in "iambic pentameter" actually mean. Hint: iambic refers to the pattern of emphasis in the syllables and pentameter points to the number of metric feet in a line of poetry. Find a copy of William Blake's "The Tyger" written in 1794. Referring to the information about meter and rhythm you found, try to determine the type of meter used in this poem by Blake. Can you think of a reason for the poet to choose this meter for his poem about a tiger?

2. Most students are a bit familiar with the haiku format. There are three lines in a haiku, with the first and last lines having five syllables and the middle line having seven. The subject is generally either something found in nature or an abstract subject like love or fear. Try to write a haiku of your own. See if you can read it aloud in a single breath, which is another feature of traditional Japanese haiku.

3. Find the lyrics to a song you like. Write the lyrics out in the format you would use for a poem. Try marking the accented and unaccented syllables, and then count the metrical feet. Hint: each metrical foot has ONE accented syllable. Mark the rhyme scheme as indicated in this lesson using small case letters. What do you notice about the relationship between poems and songs?

4. Though it's true that the sonnet form was more common in centuries past, some twentieth century poets also wrote sonnets. A few of these are Edna St. Vincent Millay, W.H. Auden, Marilyn Hacker, and Gwendolyn Brooks. Look for some contemporary sonnets online or in a poetry anthology. Notice the layout of lines; there must be fourteen total, but perhaps the lines do not follow the Spenserian sonnet pattern. What is the rhyme scheme? What is the focus or subject of the poem?

E.A. Robinson and the Shift in Modernist Poetry Style

All Summer in a Day by Ray Bradbury | Plot, Analysis & Characters