Transgenic or genetically modified organisms are all around us. In this lesson, we'll discuss what they are, the different ways they are produced, and the variety of purposes they serve.
Create an account

What Are Transgenic Organisms?

GMOs, or genetically modified organisms, are a hot topic these days. You may have also heard them referred to as transgenic organisms. Both terms mean that the genome or genetic make-up of the organism has been modified to create a new organism. This is easy to remember because 'trans' means across or through and 'genic' means to produce or generate something. So, in transgenic organisms, we are producing or creating something new across or through its genome.

And by new we mean a new genome, not necessarily a new look or feel. For example, a lot of the produce you'll find in the grocery store has been genetically modified, but you wouldn't know it by looking at it. Likewise, many flower varieties that we put in our gardens are also genetically modified to produce interesting colors or patterns. 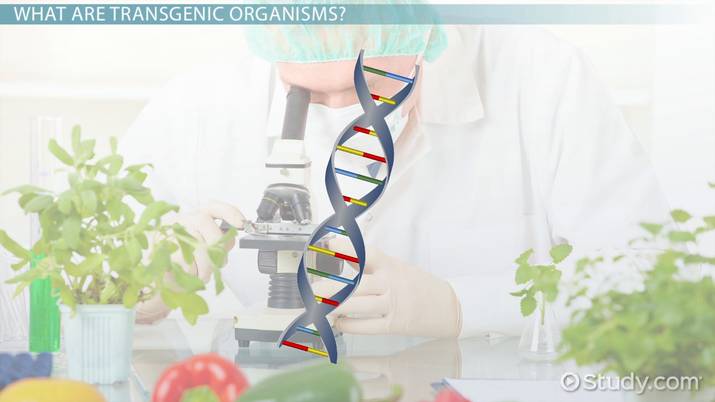 How Organisms Are Modified

Now that you know what a transgenic organism is, let's talk about how we create these new organisms. There are different ways to do this, but in general the process involves taking genes from one organism and putting them into another in ways that would not occur naturally.

Bacteria are often used to grow and reproduce desired genes. Bacteria are great for this because they grow and reproduce quickly and can be controlled quite well in the laboratory. An example of this is insulin production. Insulin is a hormone that's normally produced in the human pancreas. Those who are diabetic can't make it, and another source is needed to treat these patients. The gene for insulin is isolated, inserted into bacteria, produced at a rapid rate, and then extracted to be given to diabetics.

Microinjection is yet another way that genes can be transferred from one organism to another. Here, the desired gene is injected into the nucleus of an egg, which is where we find an organism's DNA. The egg is then implanted into a surrogate mother to develop and we find ourselves with a transgenic organism.

We've already touched on a few uses of transgenic organisms, such as disease-resistant crops and insulin production, but there are numerous other uses of these modified organisms. Some of these are for practical purposes. Certain trees have been genetically modified to so that the paper-making process can use fewer chemicals and less energy. Growth hormone has been added to some Coho salmon to increase their growth rates. And modified yeasts, fungi, and bacteria have been used to make cheeses.

Modifying organisms has medical uses as well. Some goats have been genetically modified to produce a human hormone that treats a rare blood-clotting disorder in humans. Bananas have been modified to carry vaccines so that they might be easily administered without a shot. And some modifications serve no purpose at all, and are simply due to interest of those doing the modifying. For example, blue roses have been produced for aesthetic purposes in gardening.

Transgenic organisms, also called genetically modified organisms or GMOs, are organisms that are created through the modification of their genomes (genetic make-ups). This might be done through microinjection, which involves transplanting DNA from one organism into the nucleus of an egg of a different organism. Bacteria are often used to grow and reproduce desired genes. Bacteria are great for this because they grow and reproduce quickly and can be controlled quite well in the laboratory.

GMOs can also be made by embryonic stem cell transfer, which involves growing stem cells in the lab, injecting them with a desired gene, and then reinserting them back into the embryo.

Transgenic organisms have a multitude of uses. They are used in medicine to produce insulin, inject vaccines into foods to avoid the difficulty of administering shots, and to produce hormones that treat diseases. They may also be produced for generally practical uses, such as making new foods, creating disease-resistant crops, and increasing growth rates of animals such as fish. And of course, some modifications are made for no purpose at all. Transgenic organisms such as blue roses were created for solely aesthetic purposes.

What Is the Role of RNA in Protein Synthesis?

Mutations: When DNA Is Copied Wrong