An expatriate or expat is a person who works in a country where they are not a citizen. Study the trends and impact of expatriation on international business, and explore the definition of expatriates, their assignments, and how to be one. Updated: 12/15/2021
Create an account

Imagine you are interested in traveling to other countries. Your background is in information security. You sign on with a company called Intelliq that provides services related to intelligence security. Intelliq has contracts with companies in Dubai, Peru, and Geneva. It's time for you to pack your bags because you are ready for your expatriation assignment in Dubai. How long will you be gone? How do you prepare? What will you return to? Let's dive in to see what it's like to be an expatriate.

Being an expatriate is one of the more unique jobs in our labor force. An expatriate (or expat) is someone who works in a foreign country, one where the person doesn't have citizenship. Expatriate assignments are a result of globalization, which is the interaction of businesses operating in multiple countries. 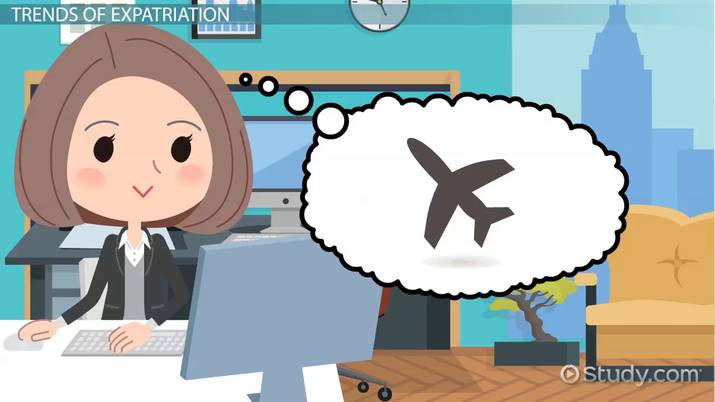 Coming up next: How to Write a Business Case Study

Assignments are either short-term, long-term, or a combination of both. Long-term assignments usually last 1-5 years in the host country. They are classified as traditional assignments. Short-term assignments range from 3-12 months. There are also expatriates who are given assignments from local companies in foreign countries rather than being brought in by a foreign company. We call these appointees.

Some expatriate trends have changed over time. The assignments can be stressful and involve very long hours. Regardless of the risks, expatriate assignments have increased due to globalization. Improvements in communication and transportation make it easier for employees to be more mobile. Like Intelliq, most assignments are for technology experts. Each assignment requires that the expatriate become fully immersed in the culture. This is because trustworthiness and teamwork have always been vital to an expatriate's success.

In the past, expatriates were recruited and assigned to labor jobs, like those needed for the oil and construction industries. This has shifted to a demand for information technology, medical services, and communication specialists. Most expatriates originate from a Western country, and it's not uncommon for assignments to take them to third-world countries. Of all the expatriate destinations, Africa, Brazil, Mexico, and Asia are some of the most common.

How to Be an Expatriate

Typically, expatriates must have a visa and work permit. The expat must have cultural and language training and have not only technical skills but soft skills. When assignments fail it's not because of money. It's usually because of an expatriate's work/life/family imbalance. To account for this, companies just like Intelliq are now investing in the well-being of their workforce, rather than just compensation. Many companies now provide:

One other trend is also worth discussing. Many expatriates are now renouncing their citizenship due to financial issues related to double taxation and banking restrictions. In the United States, expatriates find it cumbersome to quickly transfer money among bank accounts. Since the signing of the Patriot Act, most banks in the United States now require a current U.S. address. This can get tricky when an expatriate is on a long-term assignment. Some have found it easier to deal with this by becoming a citizen of another country.

Let's review! An expatriate (or expat), is someone who works in a foreign country, one where the person doesn't have citizenship. For companies like Intelliq, expatriate assignments will continue to evolve. The skills that are in demand may change. Rules related to travel may be revised. Labor laws might be altered. Let's not forget the effects of wars and conflicts. Judging from the trends of expatriation, it will continue to develop over time. Economic demands will have an effect on how foreign assignments evolve.

Even though we have appointees, expatriates who are given assignments from local companies in foreign countries rather than being brought in by a foreign company; commuters, when the expat moves in to address a specific need, usually just across the border and then returns home; short-term, expat assignments ranging from 3-12 months; and long-term assignments, expat assignments ranging from 1-5 years, the day may come when success means something different. Just as compensation used to be the most important factor, now it seems the satisfaction of an expatriate's loved ones is just as important.

As globalization, or the interaction of businesses operating in multiple countries, family structure, and banking law develops, so will the role of the expatriate.

Major Drivers of Globalization & Institutions that Shaped the Process

Futures Contract in Finance Purpose & Examples | What Are Futures?