Grace attended James Madison University has a bachelor's degree in history and a master's degree in teaching. She previously taught 2 years of high school social studies in several states around the country.

This is a triangle. Didn't know this was a lesson on geometry, did ya? Well, don't worry; that's about as advanced as we're going to get in terms of math.

So, look at this triangle. Imagine that there is one person standing on each corner. John here buys a flower and gives it to Jane. Jane then keeps the petals but trades the seeds to Jeremy, who plants them and grows more flowers, which he then sells to John, so John can give more flowers to Jane. She can give more seeds to Jeremy, and he can grow more flowers to sell to John, etc, etc. See how this quickly becomes a cycle of dependence? That's called a triangular trade.

Historically, this system became very important on an international scale way back in the 16th century, when European empires created networks of international trade across the Atlantic Ocean between the Americas, Europe, and Africa. It was this transatlantic triangular trade of the 16th century that was responsible for moving ideas, products, and people around the world. Yes, people. This triangular trade is how European empires filled their colonies with African slaves, starting a legacy of slavery that defined the Americas. 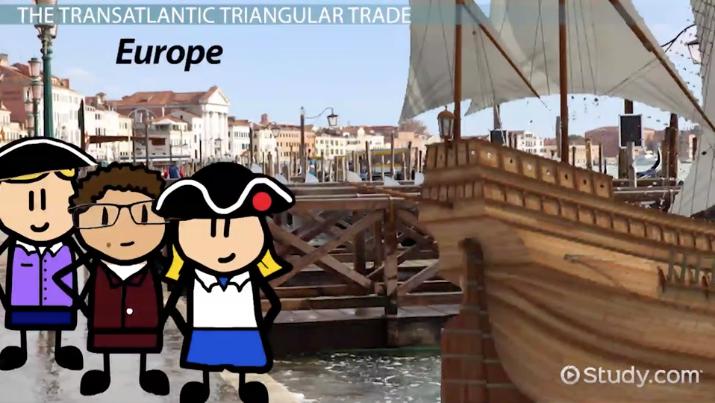 Try it now
Back
Coming up next: Triangular Trade Lesson Plan

Okay, so let's take a trip along the triangular trade route and see how this works. Before we do, we need to update your clothes; don't forget that we're heading back to the 16th century. There we go. And we start here, in Europe. We're loading up our ships with European-made products, copper, clothes, guns, ammunition; things like that. Now, we sail with our European products to ports on the African coast; that's the first leg of the triangular trade route.

So, before you know it, here we are in Africa. In Africa, the European products are traded for slaves. Slaves generally came from inland Africa, where they were captured by rival African groups and sold into African slave networks before reaching the coast. From here, the ships of slaves sailed from Africa to the Americas. This was called the middle passage, and it was a rough, rough trip. We're talking about dozens of people crammed into tiny compartments aboard a wooden ship on a trip that could last five to eight weeks. Many African slaves died on the middle passage due to terrible living conditions, poor sanitation, starvation, and physical abuse.

Once the ship arrived in the Americas, generally somewhere in the Caribbean, the slaves were unloaded, and sold to be used as laborers on large plantations. The money the ships got from slaves was used to purchase the agricultural products that the slaves were actually harvesting; things like tobacco, molasses, and sugar. Those raw products from the Americas were shipped to Europe, the third leg of the triangular trade, where Europeans processed the raw supplies and made finished products. This entire journey took about 12 weeks.

Well, no. That's the point. The triangular trade system was a continual cycle of buying and selling that maintained the wealth of European empires during the colonial period. Now, the American Revolutionary War, from 1776-1783, did end this trade for the 13 British colonies on the Atlantic Coast, but the triangular trade lasted into the 1800s in the Caribbean.

Without complete records, we'll never know for sure exactly how many Africans were forcibly removed from Africa and sent to the Americas, but historians estimate that it is somewhere between nine and eleven million people. Basically, imagine taking the entire population of New York City and shipping them off to sugar plantations in the Caribbean. The triangular trade was one of the defining features of the colonial era. It moved ideas, people, and products around the Atlantic world and defined what these areas would look like for generations to come.

The triangular trade was a system of transatlantic trade in the 16th century between Europe, Africa, and the Americas. The first leg of the trip was sending European products from Europe to Africa, where they were traded for slaves. Then, the slaves were transported to the Americas and sold. This part of the journey was known as the middle passage, and it was brutal, with a very large number of slaves dying along the way.

In the Americas, the slaves were sold into agricultural labor, and the raw materials they harvested were transported back to Europe where they were processed and sold, and that money was used to buy products that could be sold in Africa for more slaves. The entire route took roughly 12 weeks. This perpetual system of trade defined the Atlantic colonial world, moving people and products in a very large number. This trade was one of the most important factors in the wealth and power of European empires. So, while the triangle had three sides, for Europeans, profit was the only point.

In this lesson extension activity, students will map out things traded and describe the short and long-term implications of this trade.

Begin by giving students a map of the Atlantic Ocean that also includes the east coast of North and South America and the west coast of Europe and Africa. With arrows that show the direction trade flowed, students should write and draw out the names of items that were traded. For example, from Africa, students would want to draw an arrow towards the Americas that includes slaves, gold, spices, etc. Students should label with words and also include some images for items traded.

After mapping out the rest of the trade students should pick one item that was traded and write this on the back of their paper. Underneath of the item, they should list as many effects of this item's trade as possible. For example, if focusing on trade, students could talk about long-term financial influences, the importance of gold in backing an economy, funding for the Americas that would help in the Revolutionary War, etc.

Once students have finished, allow some students to share the item that they picked to focus on, and its effects.

Have students discuss the following question:

How would the world today be a different place if the Triangular Trade had not happened?

Systems of Government in the Thirteen Colonies | History, Types & Powers

Systems of Government in the Thirteen Colonies | History, Types & Powers