Just like there are many definitions in the English language, there are many identities in the trig world. A simple math identity is 4 = 3 + 1. In trigonometry, a simple identity can be tangent = sine/cosine. Notice that both statements are true. Both have also been written in simpler math terms. 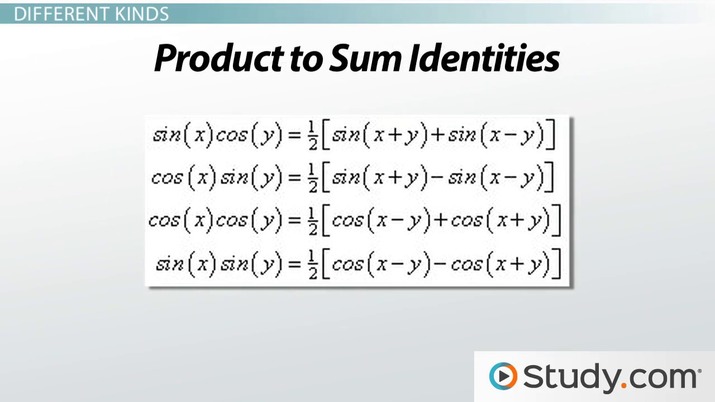 Coming up next: Alternate Forms of Trigonometric Identities

And just like some words in the English language are more popular, some of our trigonometric identities are more commonly used. The ones that are the most common have already been categorized into seven well-known groups. Do you want to see what they are? I'll show you along with the identities themselves:

First we have the basic identities. These are your basic definitions of your six trig functions:

The second group is called the Pythagorean identities. These are called Pythagorean because they make use of the Pythagorean theorem, which says that for a right triangle a^2 + b^2 = c^2, where c is the hypotenuse and a and b are the legs:

The next group is called the angle sum and difference identities. These tell you how you can break down a trig function that involves the addition or subtraction of two angles:

The fourth group is called the double-angle identities. These tell you how you can simplify a trig function where the angle is doubled:

The fifth group is called the half-angle identities. Similar to the double-angle identities, these tell you how you can simplify a trig function where your angle has been halved:

What you have seen so far is just a small sampling of all the trig identities out there. But, if you can memorize these, then you are well on your way to becoming a trig expert because these are the most commonly used identities in trigonometry.

So, what you will need is to couple your knowledge of these trig identities with your algebra problem-solving skills to successfully answer these kinds of questions. Mathematicians also use these trig identities in their calculations in higher math to solve problems that involve integration.

Do you want to see a sample problem? Okay. I'll show you one.

Well, we can solve this problem by substituting in one of our basic identities. We have a sine function and a cosecant function. We can substitute 1/sin (x) for the csc (x). When we do that, we see that the sines cancel each other. What are we left with? We are left with just a 1. So our answer is simply and easily 1.

You will use these identities in helping you to simplify and prove trig problems.

Even and Odd Functions | Graphs & Examples

Hyperbola Formula & Examples | What is a Hyperbola?

Sets of Points in Math | What is Locus of a Point in Geometry?