William Shakespeare is known for using iambic pentameter in his poems, but he also used trochaic meter. Discover what trochaic meter is, along with a trochee, and how it is used in poetry through different examples. Updated: 10/21/2021
Create an account

To define trochaic meter as simply as possible, it is a line of poetry composed of trochees. Like the iamb that is favored in over 75% of English poetry, the trochee is a basic metrical unit called a foot consisting of two syllables.

The trochee, though, begins with a stressed syllable, followed by an unstressed, or weak, syllable. This makes it the mirror image of the iamb, which follows the pattern weak-stressed. Think of the word 'trouble' (a trochee) as opposed to 'above' (an iamb). Say both words out loud, and you'll be able to hear which syllable is the stressed one.

So why would English (among other languages) prefer the iamb over the trochee, especially considering they are both disyllabic? We can actually begin to see the problem in the origin of the trochee's name. Derived from the Greek trokhaios ('falling, tripping'), this foot's name is representative of its falling rhythm, meaning a stressed syllable is followed by weaker ones. The iamb, on the other hand, corresponds to a rising rhythm, one that is most prevalent in English stress and speech patterns.

Speakers of English and Greek alike have found that the trochee's falling rhythm can easily become monotonous and exhausting if allowed to continue for very long. In fact, the Greeks often reserved use of the trochee for choral performances, giving us its alternative title: the choree. Although the trochee is seldom used by itself, there are some examples of purely trochaic meter and the ones below should be fairly recognizable. 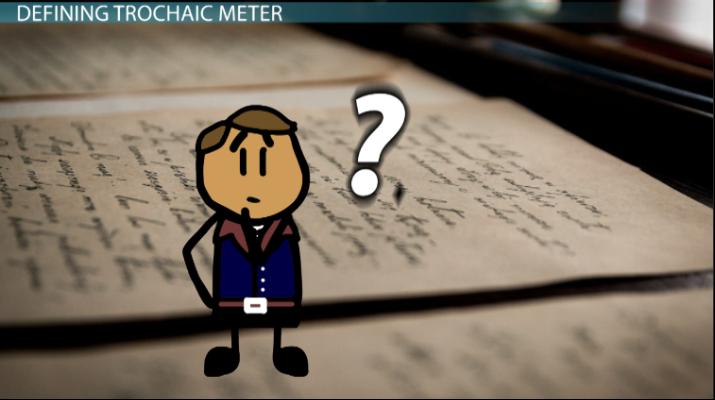 Coming up next: Introduction to Shakespeare: Life and Works

As you look at the following examples, be aware that the trochee's stressed syllable is in all capital letters, while the weak syllables are in lowercase.

Henry Wadsworth Longfellow's epic poem The Song of Hiawatha is certainly unique. Written in 1855 and based on his visits with members of the Ojibwe, Black Hawk, and other Native-American tribes, this is one of the few pieces of English poetry that uses the trochee as its primary metrical foot. It is one of fewer still that contains line after line of perfect trochaic tetrameter (4 feet per line)! Let's look at a few lines.

SHOULD you ASK me, WHENCE these STORies?

WHENCE these LEgends AND traDItions,

WITH the Odors OF the FORest,

WITH the DEW and DAMP of MEAdows,

WITH the CURLing SMOKE of WIGwams,

WITH the RUSHing OF great RIVers,

WITH their FREquent REpeTItions,

AND their WILD reVERberAtions,

AS of THUNder IN the MOUNtains?

Anyone familiar with Shakespearian drama knows that it is crafted chiefly in blank verse, or non-rhyming lines of iambic pentameter. Nevertheless, there are certain places in his work where the Bard includes passages composed in trochaic tetrameter. Unlike Longfellow's, though, Shakespeare's tetrameters are often subject to catalexis, which is the omission of final syllables that would normally appear in a prescribed metrical pattern.

This example of the Weird Sisters' incantation from the opening of Macbeth demonstrates catalexis by having the weak syllables that should finish the fourth trochee missing from each line except for the final two.

FILLet OF a FENny SNAKE,

IN the CAULdron BOIL and BAKE;

EYE of NEWT and TOE of FROG,

WOOL of BAT and TONGUE of' DOG,

FOR a CHARM of' POW'rful TROUBle,

Trochaic meter is a line of poetry composed of trochees. A trochee is a basic metrical unit called a foot consisting of two syllables. Derived from the Greek trokhaios ('falling, tripping'), this foot's name is representative of its falling rhythm, meaning a stressed syllable is followed by weaker ones.

The trochee, though, begins with a stressed syllable, followed by an unstressed, or weak, syllable. Shakespeare's tetrameters are often subject to catalexis, which is the omission of final syllables that would normally appear in a prescribed metrical pattern.

After this lesson, pupils should be able to:

Sources of Ethical Standards in Business