A truism is a statement of truth that is considered so obvious or self-evident that it does not need to be discussed. Learn about the definition and uses of a truism, and explore relevant examples. Updated: 10/14/2021
Create an account

If you asked a friend for advice on something and their best response was, 'The sky is blue,' you'd probably think twice before seeking that person's guidance again. After all, how could information so obvious be helpful? Nevertheless, statements just as obvious as the color of the sky are used as suggestions and counsel every day. These are called truisms, and they are statements that are so obviously true that they do not require discussion -- a self-evident truth.

The term 'truism' was first used by Irish priest and poet Jonathan Swift in 1708. 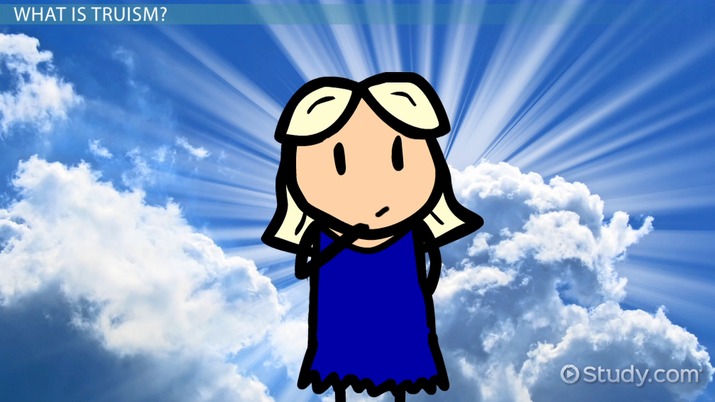 So what's the point of a truism, then? Thankfully, they're not just tools for your local 'Captain Obvious.' In fact, truisms are used quite frequently in rhetorical and literary contexts because they require so little discussion or thought to comprehend.

Rhetorically, a truism might be employed by a speaker to express a widely known truth concisely so as to save time and to relate to the audience through a shared understanding of the phrase. A speaker can more effectively persuade listeners this way. 'Better safe than sorry,' for instance, could be used by a politician to defend preemptive strikes against a supposed enemy. We know the statement is true, but we also understand that there are many different applications of this truth. The speaker's job, then, is to make us believe that such an offensive stance is one of those applications.

Authors can also use truisms in a literary context to succinctly foreshadow a character's experiences. For example, if a protagonist is warned 'not to spit into the wind,' readers may assume that the individual will at some time act in a way that has adverse consequences for that character. Again, authors can be concise by employing truisms because we all inherently understand not only the basic truth of the statement, but also the various ways in which it can be applied. Take a look at the following obvious truths and see what applications you can come up with for them!

'A journey of a thousand miles begins with a single step.'

This truism comes to us from the Chinese philosopher Laozi whose most notable work, the Tao Te Chung, is full of such observations. We know that any journey begins with a single step, but this is precisely the truth that is supposed to motivate us to start at all, regardless of how long or difficult the trek may be.

Anyone with a boss and a significant other understands this truth all too well. Attributed to Jesus in the 'Gospel of St. Matthew', this truism was originally used to say that people cannot truly serve God while also devoting so much attention to their money. Of course, we can also understand it to mean more basically that it's difficult to manage opposing interests.

'All that glitters is not gold.'

This truism dates as early as the 12th century, but you might be more familiar with it from Shakespeare's Merchant of Venice. Obviously, fishing lures are not typically made of gold, but they're shiny nonetheless. Someone like Shakespeare might point this out, though, to help us recognize that grand and flashy gestures don't always reveal a person's true nature.

'A penny saved is a penny earned.'

You've almost certainly heard this truism a thousand times from frugal relatives. However, it's changed slightly since it first appeared in the 17th century, when 'earned' was originally 'gained.' Despite the alteration, the statement still carries the same connotation today and remains as true as ever; you'll never be without as long as you have something kept for later.

Many people mistakenly attribute this truism to Ben Franklin, who was well known for his pithy truths.

We've likely all heard this truism and have probably even used it ourselves many times. This truth is so obvious that it's just a repetition of the same clause on opposite sides of a pronoun! Nevertheless, this statement can have major implications whether it's defending violent acts or framing life's difficult decisions.

First coined by Jonathan Swift in 1708, a truism is a self-evident truth, or a statement that is so obviously true that it doesn't require discussion. Truisms are frequently used in rhetorical and literary contexts because they are so easily understood by audiences. Speakers might employ this shared understanding rhetorically to save time and to relate to their listeners. In literature, authors can also use them to foreshadow a character's experiences.

Truisms have existed for millennia and can be found in works as early as the 6th century B.C. with Laozi's 'A journey of a thousand miles…'; or the Bible, with its 'A man cannot serve two masters'. We often try to associate truisms with particular sources, but many are too old to attribute to one person. For instance, 'All that glitters isn't gold' was around long before Shakespeare used it, and 'A penny saved…' may never have been used by Ben Franklin at all. Other truisms like 'You gotta do what you gotta do' are firmly rooted in our modern consciousness, and we often use them without a second thought.

Speech to the Troops at Tilbury: Summary & Analysis

Common Fallacy Types & Examples | What is a Fallacy?

Rhetorical Devices in In Cold Blood

Rose of Sharon in The Grapes of Wrath: Symbolism, Character Analysis & Description

In Cold Blood: Quotes About the American Dream

Into the Wild: Chapter 2 Summary