The tundra biome has a harsh, frozen climate with low rainfall and high winds. Explore the unique landscape of the tundra and meet the plants and animals that have adapted to live in these locations. Updated: 09/07/2021
Create an account

Introduction to the Tundra

Imagine a barren land that is too harsh for most trees, too cold for large animals and too isolated for most humans. Although such a land may sound unbelievable, there is one environment on Earth with such a description, and it is the tundra biome. This biome is very unique because of its harsh climate and limited vegetation and animal life. The tundra biome covers a large area of land in the region just south of the Arctic ice caps. There are also tundra habitats across the high mountain tops of North America, Europe and Siberia. Approximately half of Canada and most of the Alaskan coast are in the tundra biome.

The tundra is the coldest biome on Earth, with average annual temperatures ranging from -40°F in the winter to 65°F in the summer. The winter is much longer than the summer in the tundra, and as a result, the temperature is below freezing (32°F) for the majority of the year. Due to extremely cold temperatures that last most of the year, the layer of ground just below the surface stays permanently frozen. This frozen layer of ground is called permafrost.

The tundra is also a very windy environment. The high winds dry the surface of the land and create a colder environment. The winds also move dust and snow around the land, which can make life more challenging in the tundra. 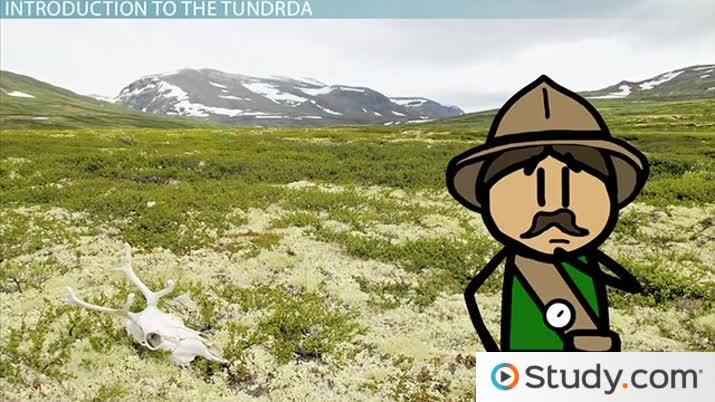 Coming up next: Endemic Plants and Animals: Definition & Examples

Plants of the Tundra

Although most biomes on Earth are covered in trees, the tundra is known for its lack of trees. The term tundra actually comes from the Finnish word tunturia, which means 'treeless plain.' The tundra has very few trees due to several factors. First, the short summer season results in a short growing season, which makes it difficult for trees to grow larger. The persistent and strong winds also make it difficult for large trees to survive due to damage caused by the wind. Additionally, the permafrost makes it difficult for roots to penetrate the soil and create a strong support base. The cold temperature of the permafrost also makes decomposition slower, which limits the amount of nutrients being cycled through the environment.

Although there are few trees in the tundra, there is a variety of smaller vegetation that grows in this environment. Plants that are commonly found in the tundra biome include dwarf shrubs, grasses, mosses and lichens.

The plants and few trees that are found in the tundra have developed important adaptations that have made it possible for them to survive in this harsh environment. The trees that can survive in the tundra are often small, which reduces the damage caused by wind and makes it possible for these tress to be covered in snow during the winter. Although it would seem that being covered in snow would make the trees colder, in fact, the snow acts as insulation for the trees and helps them stay warmer during the winter months.

Other plants of the tundra also have adaptations that help them survive. During winter months, many plants go dormant to tolerate the cold temperatures. When plants go dormant they are still alive, but they are not actively growing. By going dormant during the winter, plants are able to save energy and use it during more favorable conditions, like warmer summer months. During the summer, the top layer of the soil thaws slightly, and plants have adapted to take advantage of this change in soil temperature and of the short growing season. Plants grow rapidly during the short summer season, and they flower more quickly.

Some plants have developed more specific adaptations for survival. The flowers of some plants increase their heat efficiency by slowly moving during the day to position themselves in a direction where they can catch the most rays from the sun. Other plants have protective coverings, such as thick hairs, that help protect them from wind, cold and desiccation, which is also known as extreme drying. Although plants drop old leaves in most environments, in the tundra some plants retain old leaves to increase survival. By retaining old leaves, the plant conserves nutrients and the leaves provide protection from the elements of the environment, such as wind and cold.

Animals of the Tundra

Due to the harsh conditions of the tundra biome, there are only certain animals that can survive in this environment. There are a few large species, such as musk oxen and caribou, that live in the tundra, but most animals are smaller in size. Some of the most common small animals in the tundra include lemmings, voles and shrews. Due to the large number of small rodents and mammals, predators, such as arctic foxes and snowy owls, also inhabit the tundra.

Besides the animals that inhabit the tundra year-round, there are many species that visit the tundra during their migration. In the spring, numerous species of birds travel from all over the Americas to the tundra. Some birds fly all the way from the waters off Antarctica to the tundra. What would make a bird want to fly such far distances? The answer is food! As we learned earlier, during the short summer months the plants of the tundra go through a rapid growth phase. The abundance of food in the tundra during the summer months makes it a great place for birds to migrate to because there is enough food to supply them with the energy to create nests, raise young and at the end of the summer, travel back to their warmer environments.

During the winter months, many animals in the tundra grow thicker coats to help insulate their bodies and reduce the amount of body heat lost due to the cold and strong winds. Another adaptation for conserving body heat that is commonly found in the tundra is the development of compact bodies with short limbs. By having more compact bodies, there is less surface area from which to lose heat.

One of the most extreme adaptations for conserving energy and dealing with the hardships of winter in the tundra is hibernation. Similar to when the tundra plants go dormant in the winter, some tundra animals go into hibernation, which is a form of dormancy where they slow their respiration and heartbeat. The two tundra animals that are known to hibernate during the winter are arctic ground squirrels and grizzly bears.

The adaptation of camouflage helps some arctic animals survive in both the winter and summer months. For example, the arctic fox changes its coat color to white in the winter and brown in the summer. By changing the color of its coat, the arctic fox is able to blend in with its environment, which makes it possible for the fox to be a more successful hunter and, therefore, increase its chances of survival.

By the time this lesson is done you should be able to:

Mountain Ranges in the United States & Their Effects

Biological Diversity and the Forest: Ecosystems of the Rainforests and Temperate Forests