Learn all about how turkeys live in the wild. In this lesson, you'll gobble down some facts about turkeys, what they're like, what they eat, and how they live and raise their babies. Updated: 01/07/2021
Create an account

You might eat turkey at Thanksgiving, but did you know that not all turkeys are raised on farms for holiday meals? Turkeys also live in the wild. In fact, they're commonly called wild turkeys and live all over the United States, including Hawaii, as well as Mexico. They also live in some places in Europe and New Zealand.

Turkeys are big birds. From head to tail, a turkey measures around 3.5-4 feet. If a turkey stretches out its wings, the distance from the tip of one wing to the tip of the other is between 4 and 5 feet. Wild turkeys weigh between 5.5 and 19 pounds. That's about as heavy as a small dog! 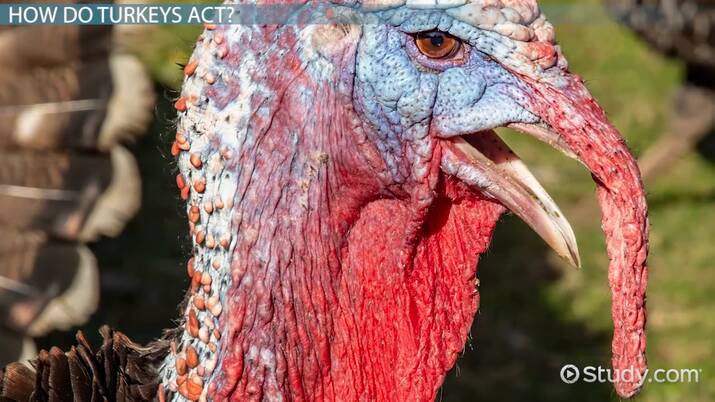 Coming up next: Adelie Penguin Facts: Lesson for Kids

Male and female turkeys look different. Male turkeys are called toms, and female turkeys are called hens. The males look the way you probably imagine a turkey. They have a big, fan-shaped tail, a red piece of skin called a wattle hanging down under the chin, and a bump on the forehead. Male turkeys also have spikes called spurs that grow from their ankles—you definitely wouldn't want a kick from a turkey! The female birds are smaller than the males. They have no wattles and no spurs, and they are lighter in color.

How Do Turkeys Act?

Turkeys are omnivores, meaning that they eat both plants and animals. They're definitely not picky eaters. Turkeys can eat acorns, seeds, berries, grass, bugs, spiders, frogs, lizards, and other plants and small animals. They mostly walk around looking for their food on the ground.

These birds can take off and fly if they need to, but they prefer to walk or run along the ground. When they run, they're speed demons. A turkey can run about as fast as a star sprinter can run. Flying, they can get up to 55 miles per hour, which is almost as fast as a car on a highway.

Turkeys are loud birds. When they really want to make a lot of noise, you can hear them from over a mile away. They're especially loud when they're making their mating calls.

Turkeys mate in the springtime. The males try to impress the females by waving their tails in the air and strutting around, in addition to their mating calls. After mating the male leaves, and the female takes care of the eggs and the baby turkeys by herself. Female turkeys build nests on the ground at the base of a tree. There, the female will lay between 10 and 15 eggs in the nest.

The babies hatch after about a month, and the mother takes care of them for several weeks. The babies can walk around and look for their own food very soon after they hatch. After a few months, the babies are completely grown. Wild turkeys usually live between three and four years.

In this lesson, you learned about turkeys and how they live in the wild. Turkeys might look big and bulky, but they can run and fly very fast. They're omnivores that eat plants and small animals and, like other birds, turkeys lay eggs. Males have a red piece of skin called a wattle hanging down under the chin and spikes called spurs that grow from their ankles.

Life Cycle of a Turkey: Lesson for Kids

Life Cycle of an Owl: Lesson for Kids

How to Analyze Graphic Information Inside a Text