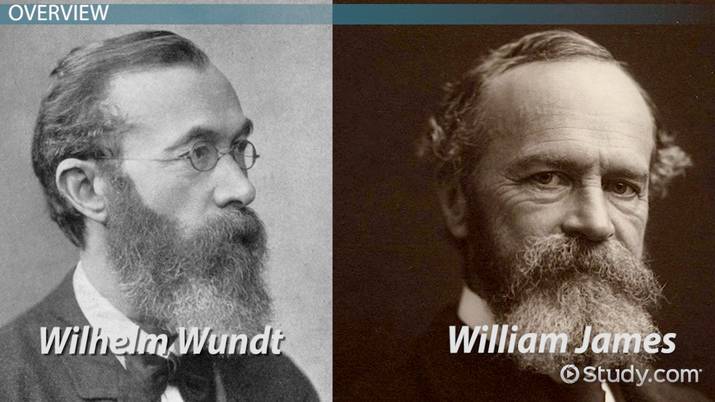 Coming up next: Three Later Approaches: Gestalt, Psychoanalysis and Behaviorism

For a long time, questions of human motivation and behavior were considered a part of philosophy. Philosophers asked many of the questions that underlie psychological study today; particularly, the debate over whether behavior and personality are shaped more by nature or nurture goes all the way back to the Greeks. But philosophers didn't go about answering these questions in systematic or scientific ways. Their theories couldn't be proved right or wrong because they were based only on casual observation.

Psychology really got going as a discipline when two men decided to take the principles of scientific research and apply them to the study of human behavior. Wilhelm Wundt was a German scientist who founded a laboratory in Leipzig that took a structuralist approach to psychology. William James was an American who founded a laboratory at Harvard that took a functionalist approach. We'll take a closer look at both men and their approaches in order to more thoroughly understand psychology's foundation as a science.

Wundt's lab, founded in 1879, was the first of its kind. His structuralist approach sought to identify the building blocks, or the structure, of psychological experience. Other sciences had been broken down in this way before; chemistry had its periodic table of elements, and physics had its fundamental laws. Wundt sought to do the same for psychology, establishing a series of fundamental relations or structures that could be used to explain all behavior.

Wundt and colleagues, like student Edward Titchener, used a method called introspection to learn what was going through people's heads as they completed various tasks. Wundt was especially interested in how people processed sensory stimuli, and he was the first to draw a distinction between sensation, or a stimulus' effect on one of our senses, and perception, or our brain's interpretation of the stimulus. He discovered this by realizing that when he asked people to listen to a sound and respond as soon as they heard it, they were much faster than when they had to also say what sound they heard. The processing and categorizing of sound took longer than the hearing of it, indicating that perception is a process that is separate but related to sensation. This is a fundamental concept for psychology that Wundt was able to discover through subjects' introspection.

The problem with introspection, as maybe you've already guessed, is that people's descriptions of their own feelings and reactions are often wrong. Let's say a psychologist like Wundt were trying to figure out the softest sound a person could hear; he'd play a sound and then ask if you could hear it, relying on your introspection to determine how sharp your hearing is. But if you expected to hear a sound, you might think that you heard one even if you didn't--and Wundt would conclude that humans can hear much softer sounds than they actually can. We're inaccurate about all sorts of things; even our memories are full of inaccuracies and exaggerations. So while introspection was valuable as an attempt to apply a scientific method to studies of the mind, some of its results suffered from our inability to accurately report our thoughts and feelings.

Over at Harvard, William James was working out a functionalist approach to solve some of these problems with structuralism. He thought that Wundt's method of trying to understand complex mental processes by subjects' self-reports was ultimately futile, akin to 'seizing a spinning top to catch its motion, or trying to turn up the gas quickly enough to see how the darkness looks.' The method of measuring would always change what psychologists were trying to measure. James, heavily influenced by Darwin's theory of natural selection, preferred instead to question why we behave the way we do. He wanted to understand behavior in terms of its function in our lives; how it helps us or hurts us and why certain behaviors are more common than others. As Darwin answered questions about physical features--like which advantages humans gained by evolving to stand upright--James answered questions about behavioral features--like why humans experience jealousy.

James' functionalism gave rise to the modern field of evolutionary psychology. This branch looks at various behavioral and personality traits in terms of how they improve fitness. Evolutionary fitness isn't what happens when you go to the gym and bulk up your muscles; it refers to your likelihood of passing on your genetic material to the next generation--your likelihood of having lots of children. A man who acts jealously is more likely to worry about protecting his wife from the advances of other men and therefore has a better chance of ensuring that all the children she has are actually his. His jealousy improves his fitness because preventing his wife from having other men's babies allows him to have more with her.

So for a quick review, Wilhelm Wundt and William James were some of the first psychologists to study the mind scientifically. Wundt founded the first psychology lab to carry out his structuralist experiments. Structuralism relied mainly on introspection, which William James objected to because it was too subjective. James' functionalism sought instead to explain behavior in evolutionary terms, to understand why certain behaviors were helpful to survival and evolutionary fitness and others were not.

The Science of Psychology: Experiments & the Scientific Method

What is Clinical Psychology?