If you own a smartphone, you no doubt realize how many brands and models now exist. However, this wasn't always the case. Historically, when smartphones were first invented, there were only two major models. While the original two models are still the dominant brands on the market, the influx of other competitors with similar products has made buying a smartphone a daunting task.

In general, having all that choice is a good thing, but after a while, all the models start to blur together and it becomes too much to distinguish between all of them. This comparison is very similar to the two-party political system of the United States and the multi-party systems of countries such as India, Italy, Germany, Japan, and Mexico.

The two-party system is a deeply rooted feature of the American government. In most two-party elections, the contest is between two candidates of two major political parties. In the United States, they are the Democratic Party and the Republican Party. Multi-party systems, on the other hand, are set up to allow multiple political parties to have the opportunity to gain control of the government separately or in coalition. 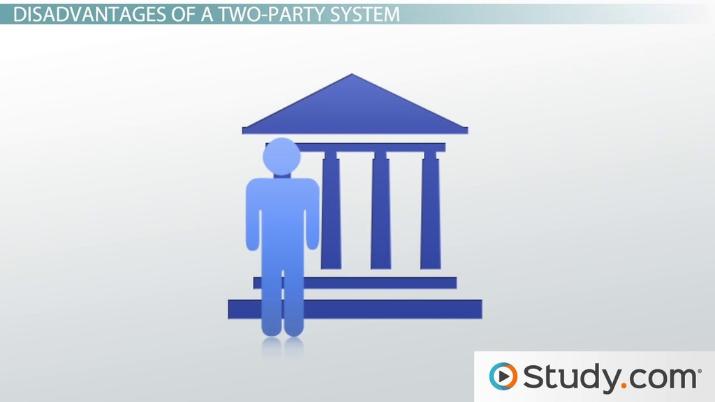 Advantages of a Two-Party System

I'm sure you can agree that having choice is a good thing. Furthermore, having to only choose between two things is simple and, for most, less stressful, like just having to pick between chocolate or vanilla ice cream.

The same can be said about the United States' two-party system. Voters can most often expect to choose between either a Democratic or Republican candidate. Furthermore, it is thought that two parties tend to be more stable because the system encourages more moderate views that appeal to wide selections of the electorate.

Keep in mind the number one goal of a political party is to get elected and control the government, and the more people that vote for you the better chance you have at that happening. This encourages having a moderate viewpoint that appeals to a wide number of people. Some even argue that stability in a two-party system comes in the form of having a more efficient government because there is a smaller likelihood that there will be disagreement and fracture. In other words, it's easier to get two people to agree on something than a whole group of people.

Disadvantages of a Two-Party System

Sometimes, though, we want more than two choices. Sometimes choosing between chocolate ice cream and vanilla is not enough. Sometimes we have a craving for strawberry instead.

Unfortunately, in a two-party system, that third choice is very rarely a viable option. Thus, one of the disadvantages of a two-party system is the lack of choice. While choosing between ice creams may be fairly insignificant in the greater scheme of life, choosing people who will make some very big decisions on laws that will affect you is much more important. Therefore, many people would like to have more choice than just two major parties.

Some also argue that significant change in some areas of society is hindered because the majority view always overrules the voices of the minority. This can also lead to voter apathy because a person may see their differing view as not mattering if they always feel outnumbered. Fewer choices can also lead to polarization within the government. We said earlier that having only two parties created a smaller likelihood that there would be disagreement and fracture within a government simply because the probability of disagreement between two people is less likely than disagreement between many people.

But this also means that two-party systems can be quite polarizing. Often, inter-party compromise doesn't happen once a majority party takes control of a government. Instead, we see a rise in partisanship, or bias in favor of a particular party. Any time a new party takes majority control, they tend to reverse the policies of the previous government when voted into power, and this does not benefit the state in the long run.

Advantages of a Multi-Party System

Wouldn't it be great if we always could rely on being able to choose from chocolate, vanilla, strawberry, and any other flavor of ice cream that we wanted? The multi-party system of government attempts to give us just that: choice. Again, multi-party systems have many variations in how they are set up, but the most prevalent is a system that relies on some form of proportional representation.

The advantage of having the legislative seats allocated to the parties in proportion to the percentage of votes they win in the election is that many different viewpoints are heard. In this case, there isn't a tyranny of the majority because all parties have the opportunity to gain at least some control of the government.

So, in the U.S., if you are pro-gay marriage but against government regulations on business, it might be hard to decide between just the Democratic and Republican parties. However, the likelihood that a party in a multi-party system would match both of your important criteria is greater.

Disadvantages of a Multi-Party System

At the beginning of the lesson in our smartphone example, we mentioned that today there is almost too much choice in which smartphone to buy. After a while, all of the models start to blur together. This is one of the disadvantages of a multi-party system.

Eventually, it can become too hard to distinguish one party from another and it forces people to only vote for a party based on one defining issue, which may not be best if that party's views aren't balanced overall.

On the other hand, to prevent this gridlock, sometimes parties start to engage in party coalitions, or political partnerships and alliances. This may seem like a good thing most of the time, but as deals between political parties increase, the multi-party system starts to look more like a two-party system, where the majority view often silences the minority.

The British & The U.S. Electoral Systems

Overview of the US Supreme Court