Joy has been a teacher for over ten years. She has primarily taught Middle School Math and has a Master's degree in Educational Leadership.

Learn about the different types of angles. Discover what angles are, the different parts of an angle, and the measurement of an angle, then explore the characteristics of acute, right, obtuse, and straight angles. Updated: 12/20/2021
Create an account

What Is an Angle?

What is the schedule you follow at school? Natalie is a 4th grade student at Angle Elementary School. At Angle Elementary School, Natalie follows a schedule every day. Different activities happen at different times throughout Natalie's school day. For instance, at 6:00 am, Natalie's mom wakes her up for school. Then, school starts at 8:00 am; Natalie's recess is at 11:00 am; and finally, Natalie gets dismissed from school at 3:00 pm. One day, when Natalie looked at the clock, not only did she see the time, but she also saw angles.

An angle is formed by two rays that share the same vertex, or corner. On a clock, an angle is formed when the long hand and the short hand meet. Angles are measured in degrees. As the degrees in an angle increase or decrease, the name of the angle changes. That is why there are different types of angles. 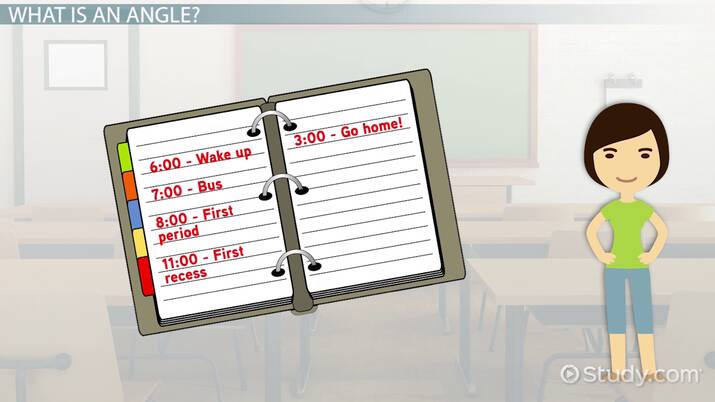 Coming up next: Types of Triangles: Lesson for Kids

The types of angles are the following:

Each time in Natalie's school schedule actually creates one of these angles. When Natalie wakes up for school at 6:00 am, this forms a straight angle. A straight angle looks like a straight line and measures exactly 180 degrees.

For Natalie, school starts at 8:00 am. On a clock, this time represents an obtuse angle. An obtuse angle is a wider angle that measures more than 90 degrees but less than 180 degrees.

One of the smallest angles is the acute angle. This angle measures less than 90 degrees. If Natalie looks at the clock at 11:00 am when it's time to go outside for recess, she would see an acute angle.

And finally, when Natalie gets ready to go home at 3:00 pm, she sees a right angle on the clock. A right angle measures exactly 90 degrees. The letter ''L'' is an example of a right angle.

Okay, let's take a few moments to review. In this lesson, you've learned many things. You learned that an angle is formed when two rays meet at a vertex. You learned that angles are measured in degrees. You also learned how to identify the four types of angles, which were as follows:

Now that you know what all of the most common angles are, see if you can notice them out in the world. You'll be surprised how many you'll see!

How to Measure Angles with a Protractor

Finding Common Factors of 2 Given Numbers: Lesson for Kids

How to Measure & Compare Weights: Lesson for Kids

How to Simplify Fractions | What is a Simplified Fraction?