DaQuita has taught high school mathematics for six years and has a master's degree in secondary mathematics education.

Have you ever looked at a sliced pizza and noticed that the beginning of each pizza slice was the same size? Did you ever take the time to wonder why that was? Or, have you ever examined the lines in a parking lot? While you may have noticed all the lines that form the parking spaces, did you ever think about the angles that were formed?

Well, if you haven't before, I'm sure you're thinking of them now. In every pizza and in every parking lot, there are many different angles and angle relationships. In this lesson, we are going to learn about these relationships, ways to identify the relationships and examine the measures of these angles. 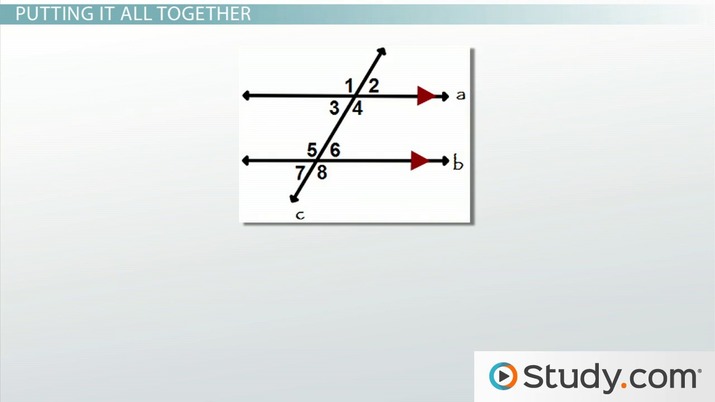 Coming up next: Angles and Triangles: Practice Problems

The first angle relationship that we will discuss is vertical angles. They are defined as a pair of nonadjacent angles formed by only two intersecting lines. They are known as 'Kissing Vs' and always have congruent measures. In the figure below, angles 1 and 3 are vertical, as well as angles 2 and 4.

Similarly, we also have alternate exterior angles that are located outside of the two intersected lines and on opposite sides of the transversal. An example of this relationship would be angles 1 and 8, as well as angles 4 and 5.

With the exception of vertical angles, all of these relationships can only be formed when two lines are intersected by a transversal.

With so many similarities, you may be wondering how to determine the relationship between angles formed by transversals and intersecting lines. All you have to do is ask yourself these three basic questions:

From here, we will combine our answers for questions 2 and 3 to determine the relationship between the angles.

Before we get into our examples, let's go ahead and discuss the relationship between the measures of these angles.

As mentioned earlier, a pair of vertical angles will always be congruent. No matter what the diagram looks like, each pair of vertical angles will always have the same measurement. But, the story is a little different when observing corresponding, alternate interior, alternate exterior or consecutive interior angles. We cannot make any assumptions about their values unless we have one specific condition: parallel lines.

Putting It All Together

Now that we are aware of these relationships and their measures, let's tie all of this information together by examining a couple of basic problems.

Before we can solve this problem, we must determine the relationship between these two angles. Let's answer those three questions from earlier. For question 1, we notice that these angles are not in the same location. Angle 1 is in the upper left corner of the top intersection, and angle 8 is in the lower right corner of the bottom intersection, so they cannot be corresponding angles. Let's move to question 2. We see that these two angles are on opposite sides of the transversal, so we can classify them as alternate angles. In response to question 3, both angles are outside of the two lines and must be exterior angles. When we combine our answers to these questions, we can conclude that they are alternate exterior angles.

Before we can find the measure of the angle, we must first solve for y. To do this, let's begin by determining the relationship between the two angles. We will revisit the three questions from earlier. In response to question 1, we see that angle 4 and angle 6 are not in the same location at each intersection, so they are not corresponding angles. To answer question 2, they are on the same side of the transversal, which makes them consecutive angles. And, to address question 3, they are both within the two lines, which makes them interior. Therefore, we see that angles 4 and 6 are consecutive interior angles.

Though this is a great start to our problem, we are not yet finished. We were asked to determine the measure of angle 7, even though we were only given information about angles 6 and 4. Let's find the connection between the angles.

Since we know that y has a value of 5, we will substitute this into the equation for angle 6. We will see that angle 6 = 15(5) - 11. After we simplify, we see that angle 6 measures 64 degrees. As we stated before, angle 6 and angle 7 are congruent because they are vertical angles. Therefore, we can conclude that angle 7 is also 64 degrees.

Determining if angles are vertical requires simple observation, while determining other angle relationships can be done by asking yourself three questions:

When referencing angle measures, we know that the measures of vertical angles are always congruent; however, the relationships of measures for the other angles are determined by whether the two intersected lines are parallel or not.

After you've finished with this lesson, you'll be able to:

Measure of an Arc: Process & Practice

The Pythagorean Theorem: Practice and Application

Angles Formed by a Transversal