Taormina has taught advanced high school biology, is a science museum educator, and has a Master's degree in museum paleontology.

In the human body, there are several types of basic tissue. Muscle tissue, nervous tissue, connective tissue - each one serves a purpose within the body, through the transmission of messages, movement, and the protection of organs. The epithelial tissues of the body are the tissues that line the surfaces of our skin, our digestive organs, and our respiratory organs. These tissues are found anywhere in the body where a barrier is put up, and things can selectively pass across that barrier. From the dead surface skin epithelial cells to the absorbent epithelium of the interior of our lungs, epithelial tissue can take on many forms. 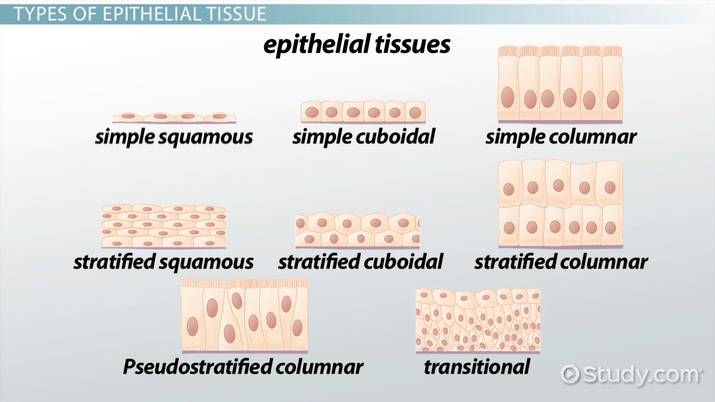 Coming up next: Gross Anatomy of the Airway and Lungs: Conducting & Respiratory Zones

First, let's look at eczema. Eczema, also known as dermatitis, is a disease that causes inflammation and irritation of the skin. In fact, that's what dermatitis means: derma means 'skin,' and -itis means 'inflammation.' This irritation and inflammation of the skin can take on many forms, including swelling, rashes, pustules, and itching. Common causes for eczema include allergies, changes in hormone levels, stress, or genetic predisposition to the disease.

While there is no cure for eczema, there are ways to treat it. Ointments and medicated salves can help sooth the symptoms, while prescription medications can help manage the dryness and irritation of the skin. Prevention is a best bet for eczema, including moisturizing the skin and avoiding irritants.

Eczema affects the stratified squamous epithelium of the skin, and the underlying blood vessels.

Next, we'll look at psoriasis. Psoriasis is a disease that affects the epithelial cells of the skin, creating a red, scaly rash. Often psoriasis is associated with other diseases, such as heart disease and diabetes. Genetic factors can lead to a predisposition to psoriasis, though the disease is often brought on by environmental triggers. The stratified squamous epithelium cells sense stress hormones, infection, and the presence of certain medications like lithium, a depression drug. Injury to the skin in the form of sunburns or scratches can also trigger psoriasis; when injury causes a patch of red, itchy psoriasis, the phenomenon is known as the Koebner response.

Psoriasis affects the stratified squamous epithelium of the skin.

Now, let's look at epithelial carcinoma. There are many forms of epithelial cancers, known as carcinomas, which can affect epithelial tissues throughout the body. Carcinomas result from genetic predisposition, environmental factors, such as excess sunlight, or exposure to pollutants and smoking, and can become malignant if not treated promptly. Malignant cells divide out of control and form large masses, or tumors. This kind of cancer arises in the cells of the body that line its outer and inner surfaces; examples include breast carcinoma, colon cancer, lung cancer, pancreatic cancer, and stomach cancer. Many of these carcinomas are among the most dangerous cancers, in terms of their prognosis.

Finally, we'll take a look at sever asthma. Severe asthma is a disease that causes inflammation of the air passages in the body, including the lungs, the bronchial tubes that lead from the windpipe to the lungs, and the windpipe itself, or trachea. Asthma can lead to the breakdown and shedding of the respiratory epithelial cells, while severe asthma exhibits thickened and renewed epithelial cells that do not respond well to asthma treatments that try to reduce swelling, such as corticosteroids.

Four examples of epithelial tissue disease include eczema, psoriasis, epithelial carcinoma, and severe asthma. Eczema affects the epithelial tissue of the skin, including the stratified squamous tissues, and causes inflammation of skin tissue in angry rashes and itchy welts. Psoriasis also affects the stratified squamous tissue of the skin, and results in irritated scabs of skin that have a genetic component to their predisposition. There are many types of epithelial carcinomas, or epithelial cancers; this disease causes malignant cells to divide out of control and form masses known as tumors. Finally, severe asthma affects the simple squamous, simple columnar, and pseudostratified epithelium of the respiratory system, all located in various areas like the bronchial tubes, or tubes that lead from lungs to windpipe, and the trachea, which is the windpipe itself.

Parabola Equation, Graphing & Examples | What is a Parabola?