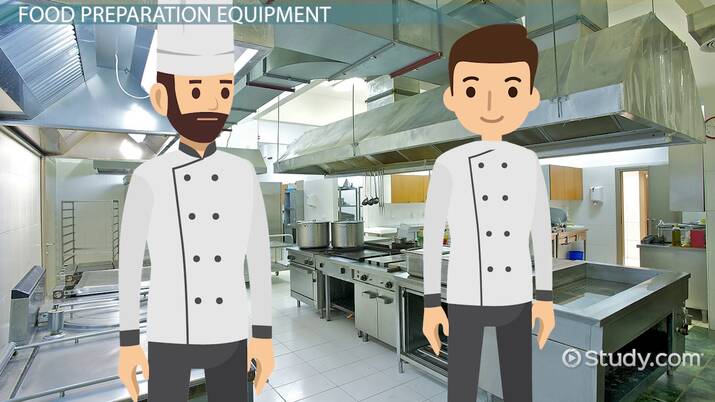 Let's start with commercial scales. He sees Mary measuring out the ingredients for a number of dishes on the dinner menu, including pasta, mac and cheese, and salads. She uses a baker's dough commercial scale to measure out dough for cakes, cookies, and bread; a pizza scale to measure out the correct portion of cheese for the pizza; and the portion scale for portioning out the various side salads for each person.

Now let's look at blenders. At the next station, Bob is using the commercial blenders for beverages like pineapple and pomegranate smoothies. He is multitasking by attending to the milkshake machines and getting them ready for vanilla and peach milkshakes. Later, he will use the commercial immersion blender to semi-blend the vegetables for the soup that is simmering on the stovetop.

And, finally, commercial can openers and crushers. Ray also has commercial can openers that help kitchen staff to quickly open a large number of cans, which come in handy for broths and stocks that are frequently used as bases in cooking. Can crushers help save space in the recycle bins and can easily crush a thousand cans per day.

Let's start this section with food processors. Jake is shredding cheese on the batch bowl processor, which is a continuous feed food processor with blades for slicing, shredding, and grating. Since it's a commercial grade processor, it can continuously shred, slice, grate, and dice non-stop, so large quantities of food are processed in a very short time. After shredding ten pounds of cheese in minutes, Jake moved on to use the buffalo chopper to chop five pounds of onions. The buffalo chopper is like a giant food processor with a large bowl where large amounts of food can be quickly chopped. Next, the vertical chopper was used to puree tomatoes, chop cooked chicken and potatoes, and mix batter with butter for the tomato soup and pot pie.

Now let's look at dough processors. Jake's teammate, Mike, is working on dough equipment. He uses the rounder to get his pizzas perfectly round, and the sheeter to flatten the dough for pie crusts and pizzas. The dividers help him make and cut the right size dough into lumps for making bread and buns.

Let's start this section by looking at seafood preparation. As Ray inspects the seafood preparation equipment, which includes the shrimp deveiner and the oyster shucker, he realizes how much time and effort is saved by using these machines, especially since his diner has a sushi bar. The deveiner can process up to a thousand shrimp per hour, and the oyster shucker helps open hundreds of oysters without the use of any knife or other handheld tools.

Now let's look at salad preparation. At the salad station, there are slicers, cutters, and spinners. Sue is busy slicing tomatoes using the tomato slicer. Apples and peaches for the fruit salad go into the fruit and vegetable cutter. She will be putting the salad ingredients into the large salad spinner that will help separate the water from the salad greens using centrifugal force so that the dressing will stick better to the salad.

Finally, let's look at garnishing equipment. Ray has a sweet spot for desserts. He examines the garnishing equipment to make sure they are functioning properly. Whipped cream dispensers are used to make whipped cream by passing nitrous oxide gas through cream, which makes it light and fluffy. Cooking torches come in handy for caramelizing the sugar for the crème brûlée. Food spray guns can be used for coating or glazing doughnuts and cookies with cherry glaze or powdered sugar.

First, let's take a look at meat slicers. Linda is working in the kitchen slicing sausages and ham on a meat slicer for lunch meat. She is proficient in using four different kinds of meat slicers. The electrically powered automatic slicer she uses for fast cuts of deli meat is pre-programmed for the thickness of slices. Linda also uses the old slicers that are manually operated by cranking. She sometimes uses the prosciutto slicer, which is a specialty meat slicer, specific for prosciutto, which also happens to be one of her favorite foods!

For slicing hundreds of chickens and turkeys for salads, sandwiches, and wraps, Linda relies on her commercial chicken slicer. As each piece is passed through the machine, they are sliced to the desired thickness. An entire portion of chicken can be sliced in one step instead of using a knife to slice through multiple times, risking injuries in the process.

Now let's look at peelers. Sue also makes use of fruit and vegetable peelers to help prep raw fruits and vegetables for her salads. The potato peelers can process large quantities of potatoes, apples, and carrots for salads and fruit tarts in almost no time!

Now let's look at French fry cutters. This is one of Ray's favorite stations! He loves the French fry cutters that allow him to slice potatoes for different kinds of fries. These are heavy duty cutters, and can also be used to make crinkle cut fries, steak cut fries, curly fries, and waffle fries!

And, finally, let's look at grinders and graters. Kelly is busy grinding the different spices for the dishes using the spice grinder. Parsley and cumin need to be finely ground for the pasta, and nutmeg has to be grated for the apple pie. For the cheese on pizza toppings, she makes use of grinders and graters: the cheese grater for grating cheese and the cheese shredder for shredding cheese as a garnish on a served bowl of chili.

All right, let's take a moment to review what we've learned. In food and beverage management, it's important that commercial kitchens have all the right food preparation equipment, or tools used to quickly and efficiently process different kinds of foods and beverages. Some of the equipment that's commonly used and that we've looked at included the following:

What is Food Preparation? - Definition & Types

Sectors & Services of the Hospitality Industry

Causes of Supply and Demand Changes in Microeconomics

Commodity Overview, Types & Examples | What is a Commodity?

What Is a Yield Test?

The Importance of Team Building in the Hospitality Industry