In a literary work, narration is the 'point of view' from which the story is told. Discover examples and types of narration including omniscient, limited, and objective, as well as how each affects the scope and meaning of a story. Updated: 08/27/2021
Create an account

What Is Point of View?

You might have noticed that when trying to give their opinion about something, people often talk about their point of view. 'From my point of view...,' they may begin. Used generally, point of view refers to the perspective from which people see things. In literature, where stories are intentionally crafted by their authors, point of view is the angle from which a story is told. Writers carefully choose point of view because it has an effect on the scope of a story.

For example, if I told a story from the point of view of a small child, the events would be limited to the kinds of things a child would notice and think. I couldn't suddenly start writing from the child's mom's point of view without confusing my reader. Think about point of view like a camera. Where the camera is placed changes not only what you see, but what characters you care about. 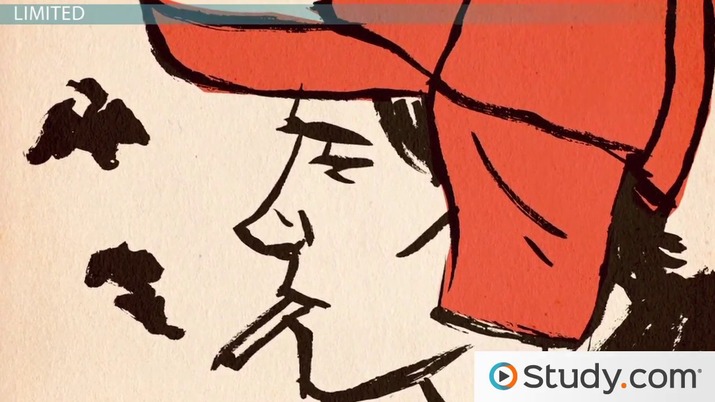 Coming up next: What is Foreshadowing? - Types, Examples & Definitions

Omniscient narration takes in everything from all angles. Sometimes likened to a God's-eye-view on the world, omniscient narration in literature means the reader can see and hear all the action and the thoughts and feelings of all the characters. Most of the classic writers, from Jane Austen to Charles Dickens, used omniscient narration. Take this example from George Eliot's Middlemarch:

Poor Lydgate! or shall I say, Poor Rosamond! Each lived in a world of which the other knew nothing. It had not occurred to Lydgate that he had been a subject of eager meditation to Rosamond...that inward repetition of looks, words, and phrases, which makes a large part in the lives of most girls...But Rosamond had registered every look and word, and estimated them as the opening incidents of a preconceived romance - incidents which gather value from the foreseen development and climax.

Even though there is a first-person 'I' in this passage, we get the omniscient inside scoop on their relationship from both sides ('I', in this case, is the narrator, not a character in the story). Lydgate is completely oblivious that Rosamond is replaying all the stuff he's said and done over and over. Meanwhile, Rosamond is registering 'every look and word' as the start of a great romance. Middlemarch often moves between the thoughts of the many characters that make up this sprawling novel, which makes sense given that Eliot is telling the story of the entire community of Middlemarch.

Sometimes, the omniscient narrative voice is so all knowing we are given access to what hasn't even happened yet, with the narrator revealing the future. 'Little did she know, Maria was about to get some ice cream...'

Some authors choose to tell their stories from a more specific angle. With limited narration, the reader is only able to view part of the story from a specific angle. Again, think of it as a deliberately placed camera, where you can only see what the author wants you to see.

Take, for example, the effect the first person point of view has on J.D. Salinger's novel, The Catcher in the Rye (1951). The novel is told from the perspective of the precocious Holden Caulfield, a teenage boy with a lot of mental anguish, recently expelled from his private school and dealing with the death of his younger brother, Allie. Because it's in first person, we get to hear and see things as Holden hears and views them.

'Boy!' I said. I also say 'Boy!' quite a lot. Partly because I have a lousy vocabulary and partly because I act quite young for my age sometimes. I was sixteen then, and I'm seventeen now, and sometimes I act like I'm about thirteen. It's really ironical, because I'm six foot two and a half and I have gray hair. I really do. The one side of my head - the right side - is full of millions of gray hairs. I've had them ever since I was a kid. And yet I still act sometimes like I was only about twelve. Everybody says that, especially my father.

This is an example of how we hear the story from Holden directly, in his distinct voice, for the entire novel. He admits to a 'lousy vocabulary,' in addition to not acting very maturely. But we don't really need him to tell us that he isn't the most mature kid, his point of view already does that for us. Because The Catcher in the Rye is limited to Holden's viewpoint, we don't see the story from any other person's perspective - fitting for a novel about an immature, selfish teenager.

First-person limited narrators like Holden Caulfield are sometimes called unreliable narrators because the reader can't always trust these particular characters to deliver an honest depiction of a situation. When Holden tells us about what happened, we have to consider the source. However, first-person isn't the only form of limited narration. While third person uses 'he' and 'she,' rather than first person's 'I' and 'me,' third person can still be limited.

For example, the books in J.K. Rowling's Harry Potter series are told from the third person - Harry caught sight of Seamus's eye and Seamus winked - but we (usually) see and hear only what Harry sees and hears. Sometimes we might switch to another character's thoughts for a moment or a scene, but never for long, since it is Harry's story, after all, and thus mostly limited to his point of view.

Unlike limited narration, objective narration presents the story without emotion or opinion. Third person narration is seen as the most objective because it presents what is happening from a distance, showing many angles. Ernest Hemingway's short story 'Hills Like White Elephants' is an example of an objective narrative voice - The American and the girl with him sat at a table in the shade, outside the building - here the spare style and simple description tell only the facts.

In contrast, Holden Caulfield's narrative voice is not objective, nor free of judgment and emotion - it is subjective. When he says, 'I have a lousy vocabulary and partly because I act quite young for my age sometimes,' his point of view is full of his emotions and his opinions.

Authors choose point of view carefully because it affects the scope of their stories. Omniscient narration is told from a wide distance, allowing the reader access to all of the characters' thoughts and feelings. A limited narration confines the story to one particular character's point of view, and can be presented from either a first person angle or a third person angle focused on just one character. Finally, objective narration is when a story is told from an emotional distance, without revealing the inner emotions or thoughts of the characters directly.

After you have watched this lesson, you should be prepared to:

Ode Poem Examples, Format & Types | What Is an Ode?

Understanding Words By Their Relationships